The Guitar Man By Joe Matera 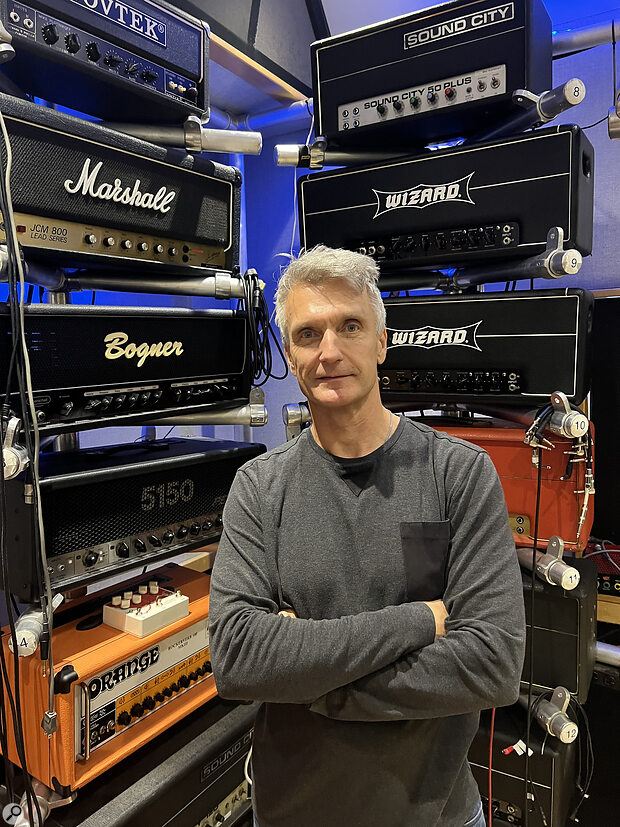 One of the world’s leading engineers specialising in rock music, Mike Plotnikoff is renowned for his guitar sounds. The secret? Find the right amp and keep it simple.

Canadian producer, engineer and mixer Mike Plotnikoff began his career as assistant engineer at Little Mountain Sound in Vancouver. He later went on to become Bruce Fairbairn’s engineer of choice, recording and mixing records for acts such as Van Halen, Aerosmith, INXS, Kiss, Bryan Adams and others. In the aftermath of Fairbairn’s tragic passing, Plotnikoff moved to Los Angeles and teamed up with uber‑producer Howard Benson. Since 2001, they have recorded and mixed hugely successful albums from Papa Roach, Three Days Grace, Hoobastank, Buckcherry, Halestorm and Kelly Clarkson, to name but a few.

Plotnikoff has managed to capture some of the greatest guitar sounds on record, and he’s done so by adhering to an old‑school approach. Forgoing any kind of modelling amps or plug‑ins, he prefers real amps and speakers, and usually relies on just a single microphone.

“One of the important lessons I learned early on in my career came from when I did Van Halen’s Balance album — which was to just use an SM57,” he recalls. “When I first started, I couldn’t have been more complicated with getting guitar sounds. Yet Eddie Van Halen taught me that just an SM57 was all that was needed, as it captures everything that you need. Ever since then, that’s been my main go‑to mic on everything. Sometimes I’ll add a little bit of a Shure KSM32 or a Sennheiser MD421 as well, but that’s all I ever use. With the SM57 you don’t get a lot of that low‑end rumble, so you get a nice midrange out of it without having to EQ it into the mic.

“I never use EQ on my microphones. Whatever the SM57’s frequency response is, to my ear it’s the right frequency, and because of that, I just never have to add any EQ to it. That’s why I choose the SM57, it always captures totally what I need. Sometimes the SM57 could be too midrange‑y and thin‑sounding and lacking a little low end, and because I don’t want to put it into an EQ, I will use the KSM32 to fill out that low‑mid and low‑end range, which it does better than the SM57, just to get a bit more of that 100‑200 Hz range, as it rounds out the sound a little bit.”

When it comes to miking techniques, again, simplicity rules the day for Plotnikoff. “Everything is straight on the cone, nothing fancy!” he affirms. “What I like to do is put headphones on and I will send a signal of the amp, just the white noise of the amp to my headphone mix. I will move the mic around on the speaker while listening through the headphones and I will find the sweet spot of the white noise, which is usually always pretty close to the centre of the cone.

“There’s very little EQ’ing when mixing finally happens as the sound is already so well recorded it doesn’t need anything else. If there is any EQ, sometimes it is just to match the top end and brightness, as once the EQ starts going onto a mix it will usually need a little bit more of the brightness. And sometimes it doesn’t need it at all.” 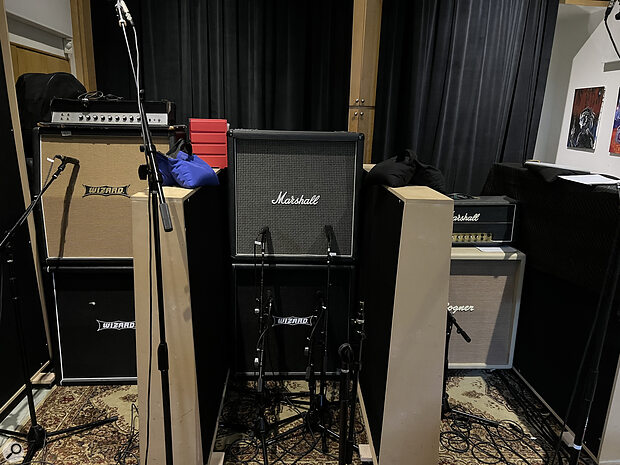 Mike Plotnikoff’s amps and speakers live in his studio — and are nearly always miked with a single Shure SM57.

For recording, Plotnikoff always uses the familiar set of amps he has permanently housed in his studio. “Whenever someone comes in to record, I will always use my amps, as I have a good amp collection. The main ones I use a lot are an original [Peavey] 5150, which has the same mods that Eddie Van Halen’s guitar tech Matt Bruck did on Eddie’s amp. He did the mods on mine too. I also have a 200 Watt 1970 Marshall Major, and it’s also got mods done by Dave Freeman who also modded Eddie’s amps. If you go back to the Van Halen 1 record it sounds a lot like that. I also have a Bogner, an Orange and a couple of Wizard amps, which are from a boutique company from Toronto. So those are my main go‑to amps.”

Mike Plotnikoff: When I first started, I couldn’t have been more complicated with getting guitar sounds. Yet Eddie Van Halen taught me that just a SM57 was all that was needed.

Plotnikoff’s engineering work with Howard Benson covers the gamut of rock and metal styles, and he finds some amplifiers and speakers work better for one genre than they do for another. “For metal records, especially if they’re tuned down to like drop‑C or B or even lower, vintage amps don’t really work,” he reveals. “You have to use more modern amps — which, for me, would be the Wizard and the 5150. Those amps sound the best in those tunings. The vintage amps don’t hold the tuning well and they’re very flubby‑sounding, and not tight‑sounding.

“When it comes to speaker cabs, I have seven different cabinets that are my go‑to. I have a vintage Marshall with 25 Watt Celestion Blackbacks. It’s a 1974 cab with the original speakers. I use that a lot for lead guitars because it sounds very good. For rhythm guitars, I will use a Wizard cab that’s loaded with 30 Watt Celestions in it and a Bogner cabinet that has 30 Watt speakers in it as well. But with the Bogner, I will use that amp more for the modern stuff. There is a certain tightness to the 30 Watt speakers that I like a lot.”

When asked about favorite guitar sounds from his catalogue, Plotnikoff pauses for a moment before he fires off his choice cuts: “There’s a couple records that still sound good when I hear them on the radio. One is Blindside’s Silence album, the Three Days Grace One‑X album, and Seether’s Finding Beauty In Negative Spaces album. Some of those guitar sounds on that record in particular are my favourite.”