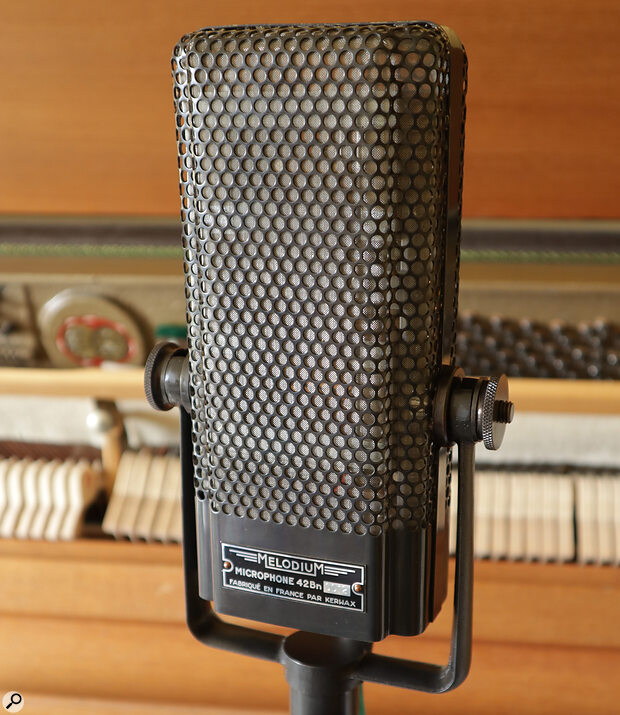 A French classic is reborn.

As ribbon mics grew in popularity during the 21st Century, so prices for original RCA and Coles mics soared. Canny studio owners then turned their attention to less well‑known vintage models, and soon discovered the Melodium 42B.

Developed by Charles Boutelleau and Émile Furn about 80 years ago, this imposing microphone enjoyed a long career in its native France. Over the last decade or so, word spread that the 42B was an affordable and good‑sounding alternative to the RCA 44 — to the point where only the second of those things is now true! Whereas you could once pick them up for a couple of hundred poundsdollars, a 42B in good condition will now set you back a four‑figure sum.

In other words, the 42B has become a classic mic in its own right. And, as we all know, what happens to classic mics is that they get reintroduced or copied. In this case, the team behind Brittany’s Kerwax Studios loved their Melodiums so much that they embarked on a painstaking recreation. The new Melodium 42Bn is almost entirely manufactured in France, with an interesting and laudable emphasis on sustainability — but, as far as I know, without the involvement of anyone connected to the original Melodium company.

When replicating such an old mic, there’s a delicate judgement call to be made as to which aspects of its design should be improved or modernised, and which should be left alone. That dilemma is particularly acute in the case of the 42B because, for all the original’s good qualities, it also had serious faults. Build quality was shockingly bad, poor design choices left it vulnerable to corrosion and other damage, and tolerances in the manufacture of parts were loose to say the least. Add to this the fact that numerous variations were made to the design over the years, and it’s not obvious what a perfect recreation would actually be like.

The Kerwax team have steered a pretty sensible course here. They haven’t slavishly adhered to the original design where there’s no reason to; for example, the new mic has an XLR socket, and an output transformer better suited to modern studio life than the originals’ 50Ω transformer. They’ve also ditched the switchable high‑pass filter, and they appear to have improved the ribbon clamping system to make the mic easier to service and set up. At the same time, though, they’ve avoided making any changes that would compromise the sound of the 42B. The ribbon motor uses chunky Alnico 600 magnets rather than modern rare‑earth magnets, arranged in a structure that closely resembles at least some of the originals; and, of course, it’s still a passive mic with a symmetrical figure‑8 polar pattern.

The modern Melodium nails the look and feel of the original, even though this was another moving target. Different grille sizes and shapes were adopted over the years, but the new version really captures the essence of the design and actually looks more classy than any old 42B I’ve seen. According to the website, the Melodium 42B was the largest ribbon mic ever made, and it’s seriously heavy too. You’ll need to budget for a very substantial mic stand, and you’ll also need to tangle with its slightly arcane mounting system. If you want to attach the 42Bn directly to a stand, you’ll need to slot its stand adaptor into the base of the yoke and fix it in place with a special winged bolt. Alternatively, the two flanges either side of the yoke can be used to suspend it from a plate that looks like a short stereo bar using two elastic cables.

These are, arguably, aspects of the design that could have been modernised, but retaining them has the advantage that these parts can be sold as spares for owners of original 42Bs. Having said that, though, the sheer variation among originals can cause problems in this department, and the new stand adaptor would not fit an original that we tried. The 42Bn’s wooden box is also available as a product in its own right; it looks lovely, but doesn’t hold the mic quite as immovably as I’d have hoped, or provide significant cushioning against impact. Annoyingly, the lid won’t close unless you remove the winged bolt that holds the standmount into the yoke.

While writing this review, I had the opportunity to put the reissue on the test bench along with a freshly restored original. The Kerwax team have done a phenomenal job of matching the original’s frequency response: measured deviation was less than 1dB across the entire frequency range up to 12kHz or so, and any minor variations higher up just reflect the fact that the 42B has a pretty steep roll‑off above that point. You could have used them as a stereo pair, though it’s quite hard to imagine how you’d position two 42Bs in a coincident array! The new 42Bn is about 10dB more sensitive than the original, thanks to the use of a different turns ratio on the transformer; the output impedance of the new model is specified as being 300Ω, though our measurements suggested 500Ω might be a more accurate figure.

The Kerwax team have done a phenomenal job of matching the original’s frequency response... You could have used them as a stereo pair.

How does it sound? Well, it’s fair to say that the new Melodium 42Bn positively invites all those clichéd adjectives that we associate with ribbon mics in general. It’s warm. It’s dark. It’s rich. It’s smoother than a polished glass sculpture of a baby’s bottom. Or, to put it in slightly more technical language, it has enormous proximity effect at the low end and an audibly limited high‑frequency response, and in between, it’s natural, unhyped and free from nasty resonances and honks. One of the comparisons we made during the review period involved trying the 42Bn and a Royer 121 on a guitar amp. With both mics close up on the grille, the 121 sounded great, whereas the 42Bn’s proximity effect was just overwhelming. But when we moved both mics back a foot or so into the room, the French mic came into its own, providing a gloriously sweet and rounded tone, whereas the 121 began to sound thin and lacking in substance.

Unless you specialise in vintage‑style recording, you probably won’t want to use the 42Bn on every source. On most singers it sounds too dark, but on that minority of ‘problem’ vocalists who just sound terrible on all capacitor mics, it can be a thing of beauty. It’s a lovely room mic, capturing the thump of the drums and de‑emphasising the cymbals, but I’m not sure it would be my first choice for overheads, unless I was after a very particular sound (and very confident that my stands could take its weight). And on most sources, I’m not totally convinced that the 42Bn delivers something you couldn’t get more easily and affordably from another mic. For example, I was able to match its sound pretty closely by rolling off the top end on my Rode NT‑R — and you could buy at least four NT‑Rs for the price of one 42Bn. I’m also pretty sure that all of the roles in which a 42Bn shines would be filled equally capably by a Coles 4038 at around half the price.

However, that’s not to say the 42Bn is overpriced. As soon as you open the package, the care, love and industrial quantities of metal that have gone into building it are immediately apparent. It’s a beautiful object that will inspire musicians and engineers alike, and which will raise the tone of any studio. It happens to be a useful studio tool into the bargain, not to mention considerably better made than any original. The Melodium 42Bn may be an objet d’amour rather than a studio essential, but it’s great that it exists!

Thanks to Stewart Tavener of Xaudia for making available a vintage Melodium 42B for comparison purposes.

A welcome return for a quirky and characterful French ribbon mic. The M42Bn won’t be for everyone, but if you know and love the original, this reissue offers the same sound as the original without some of its drawbacks.