Back in May 2018, we published a feature about choosing a power amplifier to use with passive monitors. With its very healthy 120W‑per‑channel output power, state‑of‑the‑art distortion and noise specs, and compact dimensions, the miniDSP SHD Power appears to be well suited to the role. But this is rather more than ‘just’ an amplifier: it’s a Dirac Live room/monitor acoustic optimisation host and generously featured audio streamer too. The audio streaming functions of the SHD Power are primarily aimed at consumer audio, so I’ll cover them in the ‘Streaming’ box later, but the inclusion of Dirac Live processing makes the SHD Power a very interesting studio option.

I wrote about the Studio edition of the Dirac Live software last year, and was impressed with its performance and abilities (see http://sosm.ag/dirac-live-studio). Dirac Live is unusual among its acoustic optimisation competitors, such as Sonarworks Reference 4 and IK Multimedia ARC, in that it manipulates audio in both the time and frequency domains. It is thus able to flatten not only the frequency response of the monitor and room, it is also able to tighten up the system’s time‑domain behaviour, so that its response to impulses is less smeared.

Nothing is perfect, however, and a disappointment for me was that it operates only as a DAW plug‑in — there is no software standalone version through which the entire audio output of a computer can be routed. This meant that my monitoring could only benefit from Dirac Live optimisation when the audio source was a DAW (in my case, Pro Tools). Other computer audio sources were left out in the unoptimised cold. The SHD Power potentially provides a neat fix — especially in my case, as my go‑to nearfield monitors are passive. And if that wasn’t enough to trigger interest, the SHD Power package includes a Dirac Live licence and a miniDSP UMIK‑1 calibrated USB measurement microphone.

The SHD Power is a neat and compact half‑rack‑width black box with a big rotary encoder and display on the front panel. On the rear panel is a range of input and output sockets — the latter of course including left and right speaker connection terminal posts. These are satisfyingly chunky and fit for purpose. The remainder of the SHD Power’s audio connections facilities comprise AES3, Toslink and coaxial S/PDIF digital audio inputs, a pair of AES3 digital audio output XLRs, and two analogue subwoofer outputs on phono sockets. You’ll notice that I’ve listed no analogue audio inputs, and for a few users that might seem a fatal flaw, however even some of the most inexpensive recording interfaces incorporate digital audio outputs so I think it’s a flaw that can usually be overcome.

The rear panel hosts the SHD Power’s digital audio inputs and outputs, a USB port and a pair of speaker binding posts.

In addition to its conventional audio connection facilities, the SHD Power also provides an Ethernet socket for wired network connections, a USB socket for computer audio streaming and configuration (via the miniDSP SHD Windows and Mac OS application), and a further USB socket specifically intended for the connection of a supplied compact Wi‑Fi dongle. The SHC Power runs internally at 32‑bit/96kHz.

Back on the front panel, the rotary control unsurprisingly turns to adjust volume (with a decidedly fine rate of adjustment that sometimes means a lot of knob twiddling), but also incorporates a push‑button that enables channel selection, mute/unmute, standby mode and Dirac enabling/disabling. Remembering how many presses and how long a push of the control is required to achieve a particular result was a bit too much for my powers of memory so, other than an extended button push for mute/unmute, I tended to prefer using the supplied remote control.

I can imagine scenarios where either an old pair of classic hi‑fi speakers — or, of course, Yamaha NS‑10s — are given a new lease of life.

Once the SHD Power is powered up, an input, and speakers connected, a flick of the mains switch brings it to life. As a conventional amplifier it sounds powerful, clean, detailed and generally extremely capable. However, configuring the integrated Dirac Live room and monitor optimisation is a little more involved. The first requirements are that the miniDSP SHD and Dirac Live 3 apps are downloaded and installed on the computer to be used for the Dirac Live room/monitor measurement session. When that’s done (which on my Mac Mini, running OS 10.15, was trouble‑free), the next stage is to connect both the SHD Power and the UMIK‑1 measuring mic to the computer via USB. 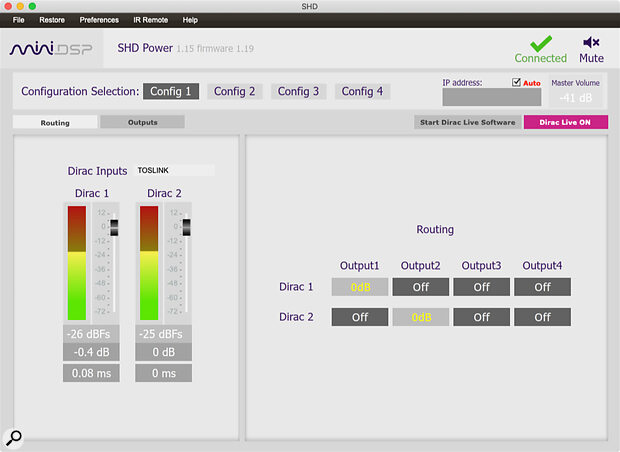 The SHD app is where you perform the Dirac room correction processing.

I’ve included a screenshot illustrating the miniDSP SHD app window, and while it offers a multitude of setup options (some of which I’ve explained in the 'SHD App Functions' box), the one of most interest for configuring Dirac Live is the ‘Start Dirac Live Software’ button at the top right. Selecting this launches Dirac Live and kicks off the process of using the UMIK‑1 mic to measure the frequency and time‑domain response of the monitors and room at multiple locations around the listening position. When the measurements are complete, and after providing the opportunity to tweak the target frequency response, Dirac Live uploads its mathematically calculated room/monitor optimisation data to one of the four preset locations that the SHD Power provides. It’s then simply a matter of engaging Dirac on the SHD Power and recalling the appropriate preset. Both can be done using the remote control handset or the previously mentioned volume control button.

The results of using Dirac Live on my usual KEF LS50 nearfield monitors were impressive. I’ve temporarily had to move into a significantly smaller studio space than before, and the proportions of the room result not only in some low‑frequency inconsistencies but also an excess of energy from the upper bass up to the lower midrange. Dirac Live resulted in a pretty effective fix for both issues, as well as tightening up image focus and depth and rendering subtle mix details more easily audible. The only potential snag is that the internal DSP of the SHD Power results in 23ms of latency, with or without Dirac Live enabled, and while that is unlikely to be a problem for mix work, it could well be an issue if the monitoring is to be used for overdubbing or tracking. Having said that, miniDSP say they are working to reduce the latency.

Having Dirac Live integrated within a very well‑specified, powerful and classy‑sounding amplifier is genuinely handy. I can imagine scenarios where either an old pair of classic hi‑fi speakers — or, of course, Yamaha NS‑10s — are given a new lease of life, or where contemporary passive monitors, perhaps a pair of Amphions for example, get a significant lift from Dirac Live room optimisation. Actually, with multiple Dirac Live preset locations available in the SHD Power, there’s no reason why both scenarios couldn’t be implemented in the same monitoring system.

Connecting an SHD Power to the Internet (via either Ethernet or Wi‑Fi) makes its streaming functions available and effectively morphs the amplifier into a contemporary one‑box audio playback system. It employs the open‑source Volumio streaming platform to provide access to Spotify, various Internet radio servers, UPnP servers, Pandora (if you’re in the right part of the world), and Roon, with more services potentially available as SHD Volumio plug‑ins are written and released.

In the main text I’ve described using the miniDSP SHD app in its role of launching Dirac Live and uploading room/monitor optimisation data to the SHD Power, however the app also enables numerous setup options to be configured. For example, you may have noticed from the screenshot that the SHD Power can be configured with four output channels on its AES3 XLR sockets. Two channels reflect the signal routed to the power amplifier outputs and two are ‘thru’ connections of the input. However, each output channel can be processed via a 10‑band parametric EQ, high‑pass or low‑pass crossover filters, a fully configurable compressor and a delay function.