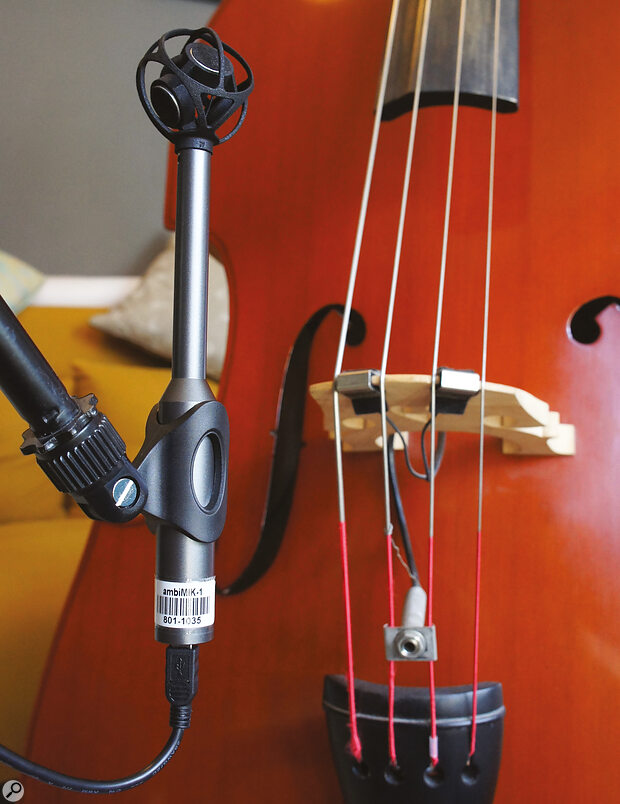 This USB microphone provides an affordable entry point into the world of Ambisonic recording.

The Hong Kong‑based company miniDSP initially blipped on my radar in early 2020, when I reviewed the Dirac Live room optimisation system. The measuring microphone supplied to use with Dirac Live was a miniDSP UMIK‑1, and doing a bit of background research brought the rest of the extensive miniDSP product range into view. There’s a whole bunch of miniDSP products available, quite a few of which would, I suspect, be of interest to the average Sound On Sound reader, and here’s one of them: the ambiMIK‑1

There are a few examples of Ambisonic mic arrays out there and some of them have already made it into the review pages of the magazine — the Rode NT‑SF1 in December 2018 and the Voyage Audio Spatial Mic in July 2020, for example. The ambiMIK‑1 combines a couple of significant features of both of those two products, in that it comprises a ‘first order’ mic array similar to the Rode, and connects via USB like the Voyage Audio. It differs from both, however, in that it is significantly less expensive.

As a ‘first order’ Ambisonic microphone, the ambiMIK‑1 incorporates four capsules mounted in a tetrahedral array (a second order array would carry eight mics), all 14mm pre‑polarised cardioid condenser types. Now, if the phrases ‘first order’ and ‘tetrahedral array’ immediately have you head scratching, I can very much recommend the explanation that Sam Inglis included in his review of the Rode NT‑SF1. You can find it here: www.soundonsound.com/reviews/rode-nt-sf1.

The ambiMIK‑1’s capsule array is mounted on the end of a slim, pencil‑style body that fits in a standard mic holder and is protected by a plastic cage that proved to be somewhat fragile (don’t ask). A USB mini B‑type socket on the back end of the mic provides the necessary connection facilities. The ambiMIK‑1 ships with a table stand, a 3m USB cable and a fluffy wind screen, and requires a few downloads from the miniDSP website: the miniDSP‑MIK mic gain setting utility, the ambiMIK‑1 VST binaural and B‑Format processing plug‑in and, of course, the ambiMIK‑1 user manual (it’s actually pretty useful, so do yourself a favour and read it). 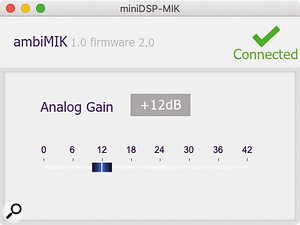 Screen 1: The utility app lets you adjust the mic gain. The ambiMIK‑1 remembers the gain when the app is closed or the mic is disconnected.Using the ambiMIK‑1 is almost as simple as connecting it to an appropriate USB interface socket and launching a DAW, however there are two complications. The first is that, depending on the volume level of the source you’re recording and how far away it is, you may well need more mic gain. That issue can be fixed by installing and launching the miniDSP‑MIK utility app. I’ve illustrated this in the screenshot. Once the adjustment is made, the utility can be closed and the ambiMIK‑1 will remember its new gain setting.

The second complication is that, because the ambiMIK‑1 is an input‑only device, a DAW session will require an ‘aggregate’ in/out virtual device to be created so that inputs from the mic can be output appropriately. On my Mac Mini desktop and MacBook Pro laptop, both running Catalina and Reaper, this all worked without trouble. The only snag I initially encountered was that the AmbiMIK‑1 wasn’t happy being connected via a USB hub, but then neither is my Focusrite interface, so this may well be a hub issue rather than an ambiMIK‑1 issue. I checked that the ambiMIK‑1 was happy with a USB extension cable, and it was. For Windows users, an ASIO driver will be required and is available for download from the miniDSP website. The ambiMIK‑1, by the way, can operate at sample rates from 44.1kHz all the way to 192kHz.

My usual DAW of choice is Pro Tools but I moved to Reaper to experiment with the ambiMIK‑1 for a couple of reasons. Firstly, the miniDSP ambiMIK‑1 binaural and B‑format processing plug‑in is VST format only, and while I could have used the plug‑in in Pro Tools within a wrapper, that would have added an unnecessary layer of complexity. Secondly, as has been mentioned a few times within these pages, Reaper is highly configurable in terms of track format and routing, so it suits the kind of multichannel setup necessary for Ambisonic work.

So connecting the ambiMIK‑1 and having it record four channels of audio is pretty straightforward. The question, then, is: what do you do with those four channels? I’ll begin to answer that by explaining a little about the audio data that tetrahedral mic arrays capture and what might be possible with it, but again, for more detail see the Rode NT‑SF1 review, and also perhaps have a look at the ‘Ambisonics’ section of Hugh Robjohns’s extensive primer on multichannel audio from way back in 2001: www.soundonsound.com/techniques/surround‑sound-explained-part-3

The four audio channels output by tetrahedral arrays such as the ambiMIK‑1 comprise Left‑Front‑Up (LFU), Right‑Front‑Down (RFD), Left‑Back Down (LBD) and Right‑Back‑Up (RBU). In this raw form, known as A‑Format, those channels aren’t really much use, partly because A‑Format data doesn’t really correspond to soundfield information that’s usable in real‑world mix situations, and partly because it lacks compensation for the timing and amplitude errors that arise thanks to the specific frequency response and physical spacing of the four mic capsules. So the first thing that has to happen with an A‑Format four‑channel stream is that it needs to be rendered in a usable format, and that’s where the ambiMIK‑1 plug‑in comes in. Developed by Dirac (of room correction fame), this takes the raw, A‑Format audio channels and renders them to either interlinked binaural stereo, or B‑Format four‑channel Ambisonics. The screenshot shows the plug‑in configured in binaural mode.

In the case of the B‑Format, the processing maths required to do the rendering job is conceptually relatively straightforward and has some ideas in common with the way a Mid‑Sides recording can be rendered to conventional stereo. B‑Format comprises one omnidirectional channel called ‘W’ (equivalent to the Mid in Mid‑Sides) which is created simply through the addition of LFU + RFD + LBD + RBU, and three figure‑of‑8 channels called ‘X’, ‘Y’ and ‘Z’, which represent front/back, left/right and up/down respectively. The maths used to render these channels is as follows:

With the four‑channel mic data now in B‑Format, relative level and pan control of the individual signals enables recorded audio to be positioned in a spherical space as illustrated by the Yaw, Pitch and Roll controls in the plug‑in. B‑Format is the most common Ambisonic format and the one typically required for VR, gaming and object‑oriented audio applications.

Flick the ambiMIK‑1 plug‑in output format switch to Binaural and a whole different set of processing maths kicks in to render the four A‑Format channels to stereo binaural. This is not only conceptually more difficult than rendering to B‑Format in terms of the maths, it’s also, thanks to the nature of binaural audio (which attempts to reproduce exactly what a pair of ears hears), more approximate. Truly convincing binaural audio requires not only two omni microphones placed a head width apart, but also for the microphone output signal to be modulated by some kind of a Head Related Transfer Function. An HRTF can either be provided by the physical presence of a dummy head, complete with detailed ear mouldings, or it can be approximated in software, and it’s the latter that the ambiMIK‑1 plug‑in in Binaural mode attempts to do.

So what happens when you record using the ambiMIK‑1? I experimented with some double bass, acoustic guitar, ukulele and spoken voice, with the ambiMIK plug‑in set to binaural mode so that I was able to listen to the results of my efforts on familiar headphones.

Screen 2: The ambiMIK‑1 VST plug‑in lets you decode the mic’s output into either B‑Format or binaural audio.My first thought was that the ambiMIK‑1 seemed slightly noisy, although not to a really concerning or deal‑breaking extent (indeed, the ambiMIK‑1 boasts a self‑noise spec 1dB better than the Rode NT‑SF1). There’s two factors at play: firstly, a mic with four capsules is always going to be noisier than a conventional single‑ or dual‑capsule mic. Secondly, the very nature of recording with the intent to include a sense of acoustic space around the source means that mic‑to‑source distance is likely to be greater. That being the case, mic gain is likely to be higher and any noise more apparent. One factor that I’d wondered about before recording was potential latency issues with the ambiMIK‑1 plug‑in. I needn’t have worried, because according to miniDSP the plug‑in latency is 2ms in B‑Format mode and 2.3ms in binaural mode. Furthermore, it ought to be possible to set up a pre‑plug‑in mono monitor send by summing the four mic channels.

Everything I recorded sounded convincing, with no sense that the mic character was dominating tonally.

Tonally, I felt the ambiMIK‑1 was slightly warm in overall balance but with generally a satisfyingly natural and believable character. Everything I recorded sounded convincing, with no sense that the mic character was dominating tonally. And as far as the Ambisonic and binaural elements are concerned, well, I’m already a fan of binaural audio so the ambiMIK‑1 is somewhat preaching to the converted. The opportunities binaural provides to manipulate the apparent location of audio sources within acoustic spaces, or to rotate the listening perspective, add a whole new creative element to recording and mixing. And with so much listening done on headphones these days, it seems crazy to me not to take creative advantage.

I had no traditional binaural head/mic unit available to compare with the ambiMIK‑1 plug‑in processed binaural, and I suspect something along the lines of the classic Neumann KU100 might reveal some limitations in the ambiMIK‑1 — however, the KU100 is very much more than 10 times the price of the ambiMIK‑1 and it doesn’t output B‑Format audio. As an introduction to Ambisonic and binaural recording, the ambiMIK‑1 is a really strong proposition.

I’ve already mentioned the Rode NT‑SF1 and Voyage Audio Spatial Mic, but the Zoom H3‑VR, which combines a tetrahedral mic array with a portable standalone recorder, is also perhaps worth investigating.