Can the Cab Clone offer something new, or is it just another ‘me-too’ cabinet simulator?

The Cab Clone is a passive speaker simulator and load box from Mesa Engineering, those Californian purveyors of knob-laden, multi-channel, high-performance guitar amps. Perhaps surprisingly then, this is a relatively simple device, priced resolutely at the affordable end of the scale. The Cab Clone is designed to sit between your amp and speaker and deliver a balanced output with cabinet simulation, whether for studio-recording or live-sound purposes. An internal load means you can also disconnect your speaker altogether for silent recording or practice, with an additional headphone output to aid the latter. There are so many more guitar players out there than any other strain of instrumentalist that the music-technology market tends to skew in their direction. As in every other department, guitarists are spoilt for choice when it comes to load boxes, power soaks, DI boxes and cab simulators. So what can the Cab Clone do to distinguish itself from the horde?

Reassuringly solid-feeling, and featuring styling that will be instantly familiar to any Mesa amp fans, the Cab Clone’s durable exterior has large vents on the top, bottom and sides to allow heat to dissipate. A bar on the underside keeps the unit raised up at an angle when sitting on top of your combo or amp head, but this can be removed if you would rather sit the Cab Clone flat on your desk or a rack shelf.

All of the connections are found at the rear. There’s an input, which connects to your guitar amp’s speaker output, and a thru output, which connects to your speaker cabinet (or the speaker in your combo). In this configuration, your amp and speaker operate as normal while the Cab Clone acts as a cab-simulated direct output, supplying both balanced XLR and unbalanced line outputs to your mixer or audio interface.

Disconnect your speaker from the thru output and the Cab Clone’s internal passive (or resistive) load takes over. The unit is available in 4, 8 and 16Ω variants. The 8Ω model — the version sent for review — is likely to be by far the most useful, as the vast majority of amps feature a corresponding output. Mesa say that the unit can handle amps up to 150W in output, but the Cab Clone will get hot when used with high-output amps at high volumes, so you may need to take a break to let it cool off. The final feature on the back panel is the headphone output. Designed for silent-practice purposes, plugging in a set of cans defeats the XLR balanced out.

On the front panel, the Cab Clone provides a range of controls to shape the cabinet-simulated output. In addition to phase-flip (polarity-invert) and ground-lift switches, there’s a continuous level knob for the balanced output. Ranging from -30dB (mic level) to +4dB (line level), it’s indented at 12 o’clock for -10dB (instrument level). Lastly, a cabinet voicing switch offers three distinct EQ options. Said to be based on a 4x12 cab with 60W speakers (we’ll assume Mesa’s Rectifier 4x12 equipped with Celestion Vintage 30s was the model here), the Closed Back position provides a scooped mid range and additional upper harmonics. The Open Back position provides the most open top end, while the Vintage Cabinet position has a darker tonality, rolling off the upper harmonics. 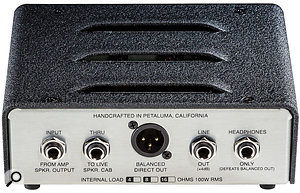 The Cab Clone is available with a 4, 8 or 16 Ω internal load, but that impedance is fixed.

The big issue that cabinet simulators face is one of unrealistic expectation. Whether manufacturer hype is to blame or the advent of affordable — and really pretty good — digital amp-modelling hardware and software, a lot of guitarists expect to be able to plug in and immediately hear the sound of their amp in the room or the fully produced guitar sound you would hear on a record. The immutable laws of physics, electronics and psychoacoustics mean that this is, unfortunately, just not going to happen.

So what do you get from the Cab Clone’s balanced out? The answer is something strikingly similar to what you’d get from a dynamic mic placed in front of the speaker. Perhaps a little brighter (depending on the position of the voicing switch) but fairly full, balanced and certainly a long way from the flat, brittle sound of a direct signal with no cabinet simulation. Further treatment is required to get to a satisfactory tone (some EQ, a little reverb...) but the same is true of the signal from a conventionally miked up cab.

I found it relatively easy to achieve some pleasing clean tones. Overdriven sounds are a little trickier to get right (in my experience, that’s a blanket statement that’s true no matter what method you’re using to record), but the voicing switch provides a useful range of adjustment, with each position providing something different without over-exaggerating the tonal changes. I found myself favouring the darker, smoother sound of the Vintage Cabinet setting (a name I found slightly confusing, as I associate lightly built, open-backed vintage cabs and combos with a brighter sound) but your guitar, pickups and amp of choice will naturally influence your preference here. The front-panel level control provides a good range of adjustment, and setting it at mic level means you can use your favoured mic preamp to further recreate miked-cab conditions.

Once you unplug your speaker cab for silent recording, the amp has to rely on the Cab Clone’s passive internal load and overall performance suffers as a consequence. The relationship between your speaker and your amp’s output transformer is a dynamic and complex one, thanks to the speaker’s moving coil. The end result of switching from this reactive load to the Cab Clone’s passive, purely resistive load is a change not so much in tone (which A/B tests reveal is relatively consistent at moderate output levels) but in feel and playing dynamics. Without the natural, bouncy compression created by the interaction between amp and speaker, the sound perceptibly flattens out and acquires a harder edge. This can be counteracted to a fair degree with the sensitive application of compression, but purely from a guitar player’s perspective, it doesn’t feel as nice to play!

Without the opportunity to add EQ, reverb and compression after the fact, the headphone output is the option I enjoyed playing through least. Though Mesa point out that you can add effects in your amp’s effects loop (if it has one), it’s hard to picture this feature of the Cab Clone getting a lot of use in my studio.

While the Mesa Cab Clone doesn’t offer all the features of other, generally more costly, devices — features like a reactive load, variable impedance or power-soak-style variable speaker output level — it’s clearly designed as a simple, straightforward device and is priced accordingly. Where it performs admirably is as a convenient direct output sitting in line between amp and speaker. In this context, its dynamic mic-like performance could be equally useful to live-sound engineers, giving them one less amp to mic up, or used in combination with additional ribbon or condenser mics in the studio.

The Hughes & Kettner Red Box and Radial’s JDX both provide a convenient direct out positioned between the amp and speaker, though neither allow you to disconnect the speaker completely. The Suhr Reactive Load is similarly priced to the Cab Clone but provides a reactive load. Up at the higher end of the market, the Sequis Motherload has long been a benchmark when it comes to combining power soak, dummy load and cab-sim duties, but the all-singing-all-dancing Radial Headload V8 has recently received a glowing review in these pages too.

A sensibly priced and very useful device for adding a convincing direct output to your amp for live and studio use, but the passive load means the Cab Clone is at a disadvantage when it comes to silent recording, when compared with more sophisticated designs.