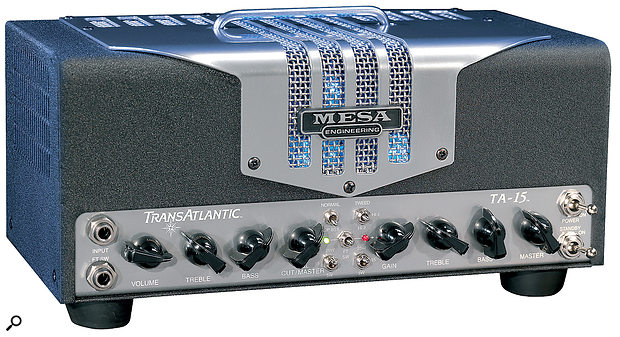 There’s so much news from the recent Winter NAMM show in Anaheim, that it can be hard to see the wood for the trees — so we thought we’d sift through it all and give the string pickers, pluckers and strummers among you a condensed round–up of the more interesting guitar–related gadgets for the recording musician.

When it comes to software, IK Multimedia have already established themselves as one of the leading guitar amp and effects modellers with their Amplitube and Ampeg SVX products. They unveiled Amplitube 3, which offers a much greater range of modelled gear and, IK state, “the most realistic playing feel” of any amp modeller. Meanwhile, Muse Research have teamed up with Peavey to create the Muse Box, which is described in more detail in the ‘What’s New’ section of this issue.

Moving on to electric guitar hardware, Mesa Engineering demonstrated their latest amp–head, the Transatlantic TA15 (pictured). Why ‘Transatlantic’? The amp has two fully independent channels (between them offering five ‘style modes’), one voiced to sound like a classic British amp (along the lines of a Vox AC15), the other a Tweed — which comes from the other side of the Pond — but with an additional high-gain option for those voicings. Also, Audix announced a larger version of their Cab–grabber cab-mounted mic bracket, for use on larger guitar and bass cabs.

There were some interesting acoustic–related products too. LR Baggs launched the Anthem Tru Mic, a new acoustic–guitar mic/pickup device that uses their established Element under–saddle pickup alongside a PZM-style mic (which LR Baggs claim is ‘noise–cancelling’) on the bridge plate inside the body. A trade show wasn’t the best place to audition this, but it seemed to offer a good degree of ‘immunity’ from feedback. ToneRite have developed the ToneRite Guitar, a novel system that vibrates an acoustic guitar’s strings to accelerate the guitar ageing process, so you don’t need to ‘play it in’. This could be a promising development for guitarists and manufacturers alike!

Finally, amongst a number of new pedal effects was the TC Electronic PolyTune, the review of which you can read elsewhere. Watch this space for reviews of the other items mentioned here.