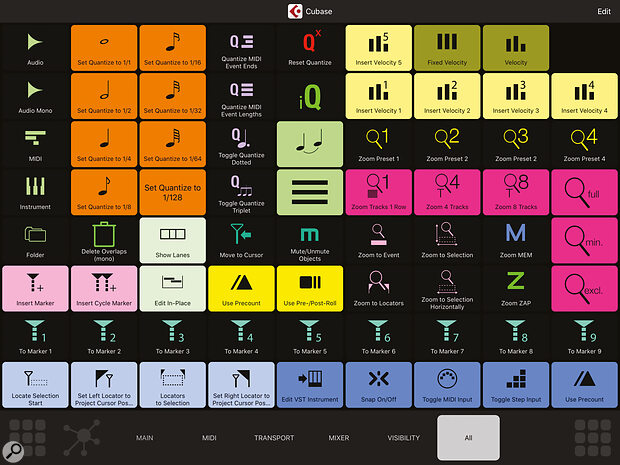 Metagrid lets you control multiple pieces of software from a single iPad app.

As a Cubase user who happens to own an iPad, I’m also a fan of Steinberg’s Cubase iC Pro app that provides a touchscreen remote control experience for Cubase running on my OS X desktop system. Of course, iC Pro is not the only iOS app that can provide remote control of your DAW/sequencer and Metagrid is another excellent choice. The app has recently been upgraded to v.1.6 and, since I last tried it, has also added Windows support to the existing OS X support. So, if you have a suitable iPad (iOS 10.0 or later is required) and want to put it to good use in the studio, is Metagrid worth a punt?

In order to use the app, you have to download the appropriate free ‘server’ software for Windows or OS X from the Metagrid website. There are some additional downloads that provide preset support for particular desktop applications and these include a number of DAW/sequencers (for example, Cubase, Logic, Digital Performer and Studio One). Ableton Live support for OS X was one for the additions in v.1.5 but the website contains full, up‑to‑date information on software compatibility. Metagrid also works with non‑music software and, for example, presets exist for Photoshop, Final Cut and Illustrator. By default, Metagrid will adjust its displayed control set to match whichever software has focus on your desktop.

If you move between multiple DAWs, or want control of other creative software, then Metagrid makes a lot of sense.

There is some initial setup required, but a couple of PDF downloads provide a reference manual and installation guides for the popular DAWs; within five minutes of starting, I had my Cubase Pro configuration fully operational. Once set up, for Cubase, what you essentially get are a number of preset screens — each themed for different areas of operation — containing a collection of buttons that provide access to Cubase key commands. And, as Metagrid ships with a huge collection of button icons (this number was significantly increased in the v.1.5 update), these provide very clear visual prompts to go alongside their text labels. It’s all super‑intuitive and, unless you are already a key command ninja, a heck of a lot easier than recalling the (sometimes) convoluted key combinations required on your actual computer keyboard. Once your muscle memory retrains itself to reach for your iPad, there are some considerable workflow enhancements to be had here.

There were a few rather quirky command choices in the Cubase preset. For example, the Transport page, while containing lots of options for working with markers, didn’t actually contain any transport controls. However, the editing process is straightforward, and I was easily able to add what I needed. The other thing to note is that, unlike Cubase iC Pro, there is no support for controlling faders or knobs; as far as I can see, this is a system for key command execution. However, Przemek Mieszkowski also offers the Metapad iPhone app and this does support gesture control with your DAW. Using Metagrid and Metapad together is possible.

If you tend to stick with a single DAW/sequencer, a dedicated remote‑control app built for that software (such as Cubase iC Pro) might be all you need. However, if you move between multiple DAWs, or want control of other creative software, then Metagrid makes a lot of sense. Provided you are prepared to dig in and do whatever initial customisation is required to suit your own needs, Metagrid is a powerful and flexible system. And given that power and flexibility, it’s also very good value for money.

While you might need to spend some time fine‑tuning the control layouts to best suit your own needs, once configured, Metagrid can bring some considerable workflow enhancements to your DAW/sequencer workflow.