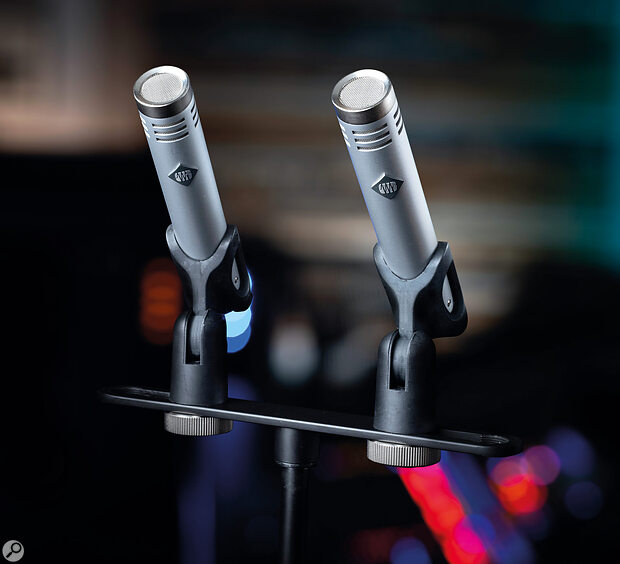 The PM‑2 set offers quality stereo capture for those on a budget.

While large‑diaphragm microphones tend to be the most glamorous, small‑diaphragm models are often better‑suited to recording acoustic instruments, and they are also easier to set up as X‑Y stereo pairs. Common applications in the smaller studio include drum overheads and other acoustic instruments such as acoustic guitars.

Designed in the US by PreSonus but manufactured in the Far East to keep costs down, the two mics in the PM‑2 kit are closely matched, small‑diaphragm capacitor microphones, each employing a 0.75‑inch, centre‑terminated, gold‑sputtered 6mm mylar diaphragm. Although there are currently no alternative capsules offered to fit these microphones, the cardioid ones provided are removable. These screw onto the end of the matte‑silver ‘stick’‑type bodies. The mics are fairly light and won’t make your mic stand droop.

As is common with this type of microphone, the preamp uses a Class‑A FET configuration, and standard 48 Volt phantom power is required for operation. Mic clips are included, as is a slotted stereo bar with knurled locking rings, intended for X‑Y or narrowly spaced mic placement (the maximum distance that can be achieved between mic clips is just 17cm, which isn’t enough to accommodate some wider‑spaced mic arrays). There are no pad or filter switches, though the mics can handle up to 135dB before significant distortion sets in so they should be comfortable with most sound sources.

PreSonus specify the frequency response as 40Hz to 18kHz, but the supplied graph shows that the response is only down by a few dB at 20kHz, and with only gentle undulations of a dB or two within the operating band, so you can consider these to be full‑range microphones without any inherent presence peaks or other intentional coloration. The equivalent noise level is specified as 22dB A‑weighted; while not especially low, that is fairly typical for this type of microphone and won’t be an issue in any normal application. Sensitivity is 8mV/Pa, which is again not atypical. So, while there’s nothing exotic or surprising in the specifications, there’s nothing to cause concern either.

I was rewarded by a clean and well‑balanced rendering of the acoustic sound of the instrument that balanced weight with clarity and avoided boxiness or roominess.

My first test with this type of microphone is always my acoustic guitar, and in this case the PM‑2s didn’t disappoint. As a rule I try to record acoustic guitars using a single microphone to avoid phasing problems when the player moves, though a coincident X‑Y pair is a pretty safe option if you really want to record in stereo. (This configuration does produce a stereo image, but it does so by exploiting the directional nature of the microphones rather than their relative distances to the source, so the result is generally less dramatic than when using a spaced pair, and the result is always more mono‑compatible.) Using a single mic placed in the textbook ‘where the neck meets the body’ position and around 300mm from the guitar, I was rewarded by a clean and well‑balanced rendering of the acoustic sound of the instrument that balanced weight with clarity and avoided boxiness or roominess.

On other acoustic sources such as my tongue drum, the mics also delivered a believably accurate version of the acoustic sound, capturing the percussive attack and metallic resonances in a very natural way. Certainly I’d have no qualms about using these mics as general‑purpose all‑rounders for recording acoustic instruments in a normal studio environment. They may not be in any way esoteric, but given their solid performance when used either as a stereo pair or individually, the PM‑2s make very capable studio workhorses and should be particularly attractive to those working to a tight budget.

An affordable yet very capable entry point  to the world of stereo recording.