Why buy a mic when you can build your own? Microphone Parts’ DIY alternative can save you money and help you brush up on your soldering skills.

Californian company Microphone Parts offer, through their web site, a range of microphone components and complete microphone kits. Among their products are electronics packages for upgrading some lower-cost mics, such as models by MXL and Studio Projects — you can buy capsules to upgrade or repair an existing mic, or you can order a custom mic kit teaming your own choice of capsule and either transformer-based or transformerless electronics. In the interests of science, we undertook to build one of their S12 kits, which comprises an unbranded body, an MP-V57 transformerless circuit kit, an RK12 edge-terminated, dual-diaphragm capsule, a swivel mount and a soft storage pouch.

This kit has one internal switch that can be configured by the builder as either a cardioid/omni polar-pattern selector, or as a 10dB pad (parts for both options are included). The circuit boards, which have through-plated holes, appear to be of high quality, as do the components, which you have to solder into place. Comprehensive instructions are provided, and while this is not a beginner’s kit — the designers rate it as intermediate — really you just have to be able to solder neatly. Key capacitors are by WIMA while the JFETS are NOS (new old stock) parts from Siliconix, and are individually biased for every kit: you get the correct resistors for your FET. The bipolar output transistors, also NOS parts, come from Hitachi, while the resistors are 1-percent-tolerance metal-film types.

All the parts come neatly bagged up, with the capsule in a protective plastic case. To undertake assembly you’ll need the usual assortment of screwdrivers, small pliers, wire cutters, a fine-tip soldering iron — and patience. A magnifying glass is also pretty much essential to read some of the tiny component markings; reading glasses just won’t cut it. Once the mic has been assembled, you’ll need a voltmeter to adjust the capsule polarising voltage via the onboard trim pot. The instructions are in colour, which is helpful, and they are adequately detailed. 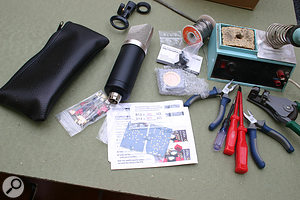 To assemble the mic, you’re going to need a decent set of tools: screwdrivers, pliers, wire cutters and a small-tipped soldering iron.While there’s nothing at all difficult about the construction, you do need to double-check that every component is in the right place before you solder it, as you’re unlikely to be able to remove them again once soldered without damaging them. If you follow the assembly order set out in the manual, that’s not too much of a challenge. There are a few alternative components included so that you can choose how to voice the mic. For the RK12 capsule you can decide whether you want the electronics to have a flat response, or a mild or more pronounced high-frequency roll-off. I went for the middle option, as C12-type capsules can be a little aggressive at the high end if unvoiced, but I didn’t want it to sound too dark. The instructions recommend using a flux cleaning solvent to remove all the solder flux prior to assembly, and I found that UPVC window cleaning solvent worked fine for this purpose. 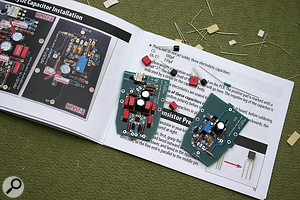 The kit comes with all the components you need, along with detailed instructions on where to solder them.Once the circuit boards have been populated, it’s time to fit the capsule, which comes with a mounting kit, though details of exactly how to fix the capsule to the included support yoke are online, not in the manual. It’s easy enough, though: there are a couple of threaded holes in the capsule surround hidden behind thin plastic tape, so you simply poke through the tape, then use the included screws to fix the capsule to the mounting yoke, but only after that has first been bolted to the mounting post on the body. It is important to handle the capsule carefully and not to touch the diaphragms, so I refitted the basket as soon as the capsule was in place and the wires were threaded through to the main body.

Then it’s a matter of connecting up a few wires — just the capsule, the XLR socket and a couple of wires that link the two PCBs — and you’re good to go. Two of the capsule wires connect directly to the back of the internal switch, which is configured for cardioid/omni pattern change by default.

Building the mic took me around three hours (including stopping to take a few photos). Having double-checked everything, I plugged in the mic and adjusted the capsule voltage to 62 Volts. There’s some leeway here, as the higher the voltage, the more sensitive the mic but the less headroom you have. The maximum voltage is around 70 Volts, above which the diaphragm can get pulled into the backplate. A test recording of speech revealed a warm, smooth character without any obvious presence boost, and the mic was a little more sensitive than a couple of Audio-Technica models I used for comparison. In some respects the voicing, at least at the higher end of the spectrum, leans in the direction of the AKG C12VR. Plenty of HF detail is present, but not in that splashy, in-your-face way that some mics present it, which suggests that it is likely to be kind to female vocals. 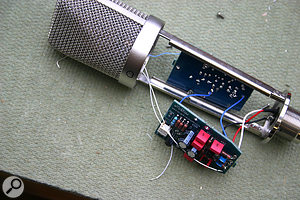 Once the circuit board is assembled, all that remains is to connect the internal wiring and screw on the body.If you want a glassy top end and didn’t voice the mic ‘flat’, a little 5kHz shelving EQ brings out the highs very nicely and this treatment works particularly well on acoustic guitar. You only need a few decibels of lift and you have all the zing you could wish for. The spec of the finished microphone is also impressive, with a high sensitivity (35mV/Pa or better) and a self-noise of 10dBA or below. Certainly I have no qualms about the sound quality, especially given the very attractive price of this kit, and it could certainly give some of the boutique mics out there a run for their money.

By building one of these kits, you not only save money but you may also gain the confidence to repair or modify mics you already have.

For around the same price as an entry-level mic you get to build a microphone that could go up against models costing two or three times the price.