Despite the AP1's (/sos/mar13/articles/mg-ap1.htm) unusually deep case the electronics are mounted on a single PCB that occupies only the front third. A slim torroidal transformer, mounted just behind it on the left-hand side, provides dual 18V windings and a 48V winding for the symmetrical audio and phantom power rails respectively. The circuit board appears to be arranged in distinct sections with the power supply to the left, high-pass filter, input and gain stage across the centre, and the bar-graph meter driver on the right (as viewed from the front). 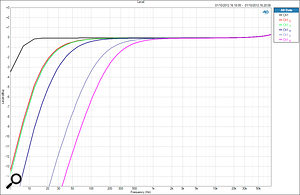 The two rotary potentiometers are made by ALPS (RK27 'blue beauty' types), while the gain switch is an ELMA unit. However, the most striking feature of the circuit board is the array of thirteen sealed relays that provides the gain switching, with more relays to switch the high-pass filter into circuit, and enable the output polarity inversion.

The AP1's bandwidth (at -1dB limits) is claimed to span 20Hz — 50kHz, but my bench tests with an Audio Precision system found the lower -1dB limit to be 8Hz (and -3dB at just above 5Hz), while the high end revealed a slight rise above 50kHz, rather than the expected gentle roll off..

The published distortion figure isn't particularly impressive at only <0.01% and the A-weighted EIN isn't much more encouraging at -127.4dBu. However, the review unit gave a THD+N figure, which was an order of magnitude better at 0.0008% (-101dB), with very clean harmonics (slightly favouring the 2nd harmonic). The equivalent input noise (EIN) figure was an equally reassuring -131.2dB with a 100Ω source impedance. So it seems the Gefell engineers are being a little pessimistic with their print specifications!

The maximum input level (stated as +15dBu) actually proved to be a healthy +18dBu, so there is little risk of overloading the input with high-output mics in front of loud sources. The specifications indicate the input impedance is a lowish 1.3kΩ, yet my handy little NTI Minirator Pro reckons it's actually a far more practical 5.7kΩ.

Phantom power was bang on the nose at +48V, but one aspect here that I wasn't very keen on is that it takes almost five minutes for the voltage to die away completely after being switched off! This could be an issue if you want to connect a delicate ribbon mic immediately after using a powered capacitor mic, for example. I suspect the reason for this is the very large reservoir capacitor which can be seen on the circuit board right next to where the mic input is connected!

The AP1's maximum line output level is given as +28dBu from a low 40 ohm output impedance, but this is one occasion where I found the published specifications were over-optimistic. The review model clipped at +26dB with a high impedance load and the gain at maximum, and slightly lower still at +23dBu when set to minimum gain. Shorting one output doesn't appear to affect the level or distortion of the other in any significant way, and correct polarity is maintained through the unit unless the polarity switch is pressed.

When I investigated the AP1's gain range I found the rotary switch spanned 3.7 — 57dB, while the total range could be expanded to 0.7 — 62.7dB with the Trim control at minimum and maximum, respectively. The gain switch steps were roughly 5dB, rather than the claimed 3dB, and the Trim control range is distinctly asymmetrical, reducing the gain by 3dB and increasing it by nearly 6dB (instead of the claimed ±6dB). However, while these figures are significantly adrift of the published specifications, in practice the gain adjustment controls and overall gain range are both perfectly satisfactory.

The high-pass (low-cut) filter's -3dB turnover can be adjusted between 16 and 180Hz, matching the control-panel markings, rather than the published 18-220Hz range. However, the frequency control is rather 'bunched' at the low end, which can be seen on the frequency response graph. The five coloured lines show the filter slopes with the control at minimum (red), nine o'clock (green), 12 o'clock (blue), three o'clock (mauve), and maximum (pink). The black line is the response with the filter switched out.