The Vitous brand has a great reputation in the world of orchestral samples. Does this brand-new library live up to it? 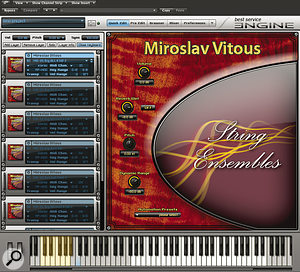 The name 'Miroslav' is nothing new to any musician who uses samples in their productions. His original orchestral sample library, which I own in Akai format, was the source for convincing orchestral mock‑ups. Fast forward a decade or so to the present day and Miroslav's original library is still being employed by composers and producers, for its simplicity and, more importantly, for its great sound.

With Miroslav's latest release, String Ensembles Composer's Dream (to give it its full title), I couldn't help but expect to have my socks knocked off. Miroslav's name alone evokes so much integrity that his new string library promises to raise the bar. For the last month, I've been testing String Ensemble's features, challenging it against the other top players in the field and using it in professional productions. Were my expectations met? Am I, in fact, sockless? Read on.

The entire String Ensembles library (SE from here on in) ships on a single DVD. At first, this was a bit off‑putting. After all, for its retail price, I would expect SE to be so massive that it would ship on a hard drive or at least a half dozen discs. Well, here's the thing: after it's transferred to your hard drive, the library weighs in at around 6.5GB. Miroslav may be a master at getting the most out of small sample sizes but in 2010, that's still a little light, right? However, the Best Service Engine Player (more on this later) decompresses the samples on the fly, so in fact you're getting 35 to 40 gigabytes of data. Some modern‑day composers may feel that unless they spend a day feeding their computer discs and having to use a new hard drive for each library, they're being short-changed, but I'm totally cool with SE's smaller footprint. After all, this is a string section, not an entire orchestra. 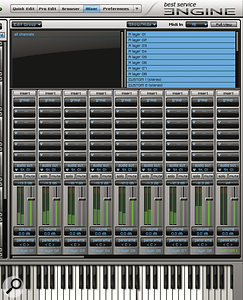 The Mixer section of the Best Service Engine software.

Installation posed no problems, so in a matter of minutes I was face‑to‑face with the interface. As I mentioned before, SE uses Best Service's Engine sample player plug‑in (powered by Yellow Tools Technology) to interface with the library. Engine, while not being as ubiquitous as some sample-player plug‑ins, is a robust piece of software that contains very powerful editing features in its Pro Edit section, as well as flexible mixing and routing options. Its basic interface bears a resemblance to NI's Kontakt, which made it seem familiar enough to make using Engine comfortable straight away. It runs in both stand‑alone and VST, RTAS and AU plug‑in modes.

I have to admit that I was a little confused about this library when it first arrived. Why would a string library boast the subtitle 'Composer's Dream'? I didn't spend a lot of time thinking about it and dived right into the patches. Big mistake. There's a concept behind SE, and it needs to be understood. The manual, written by Miroslav himself (for better or for worse), is essential reading if you want to grasp the potential of the library. The basic idea is that the samples are meant to be used as performances, as opposed to raw data to be manipulated into sounding natural. This approach ensures that the end result is as organic as possible.

The other philosophy behind SE, and one of its greatest strengths, relates to how it's meant to be played. While numerous articulations are available as separate patches, the basic large key‑switch patches contain most of the meat‑and‑potato articulations required for string writing: legato, detache, up/down bow, vibrato, tremolo, sforzato, sul ponticello and so on. Although the Quick Edit page of the Engine player provides some options for changing reverb pitch and dynamic range, I found that if the correct articulation and dynamic was selected, very little tweaking was necessary. 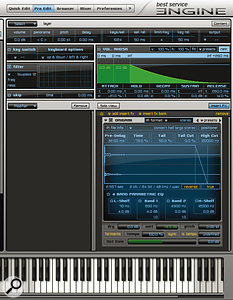 Putting SE through its paces was simple enough. The familiar layout of the interface and the efficient organisation of the patches make String Ensembles a very easy-to-use sample library.

I was expecting the sound to be outstanding and I wasn't disappointed. The detail that was captured to give the 'performances' the most natural sound is evident. On the other hand, the lack of tweakability leaves the composer somewhat stranded at times. For instance, the swells are fantastic, but there's no way to control them, so you have to adjust your playing accordingly.

Because it's laid out so simply, it's easy to overlook how much there is in this library. For example, I didn't go near the Chamber sections until I'd been using SE for a week or two. Another big mistake on my part. The Chamber samples are highly evocative, and perhaps even more lifelike than their larger counterparts. They also offer workarounds for dividing your sections.

I used SE on a cue I was developing for a cartoon series. The piece started off with a romantic violin melody accompanied by viola and 'cello. String Ensembles held its own on this section, but when the tempo doubled up and I needed a tight, rhythmic chugging from the strings, SE, while not failing, didn't give me what I needed. To be fair, no single library does everything well, so I didn't hold it against SE.

SE's strength lies in its approach rather than its features. For example, many composers who like to work the same way I do — starting a project with a large palette of sounds but with some basic patches to actually write with — will be attracted to SE. As a matter of fact, this is what I think is String Ensemble's greatest appeal. To be able to have violins, violas, 'cellos and basses in a fast loading, low CPU‑drain template, with all the articulations available in one patch each, is a terrific boon. While other libraries focus on getting the sound exactly right, in most cases they neglect to make patches that are easy to write with. When a composer is constructing an orchestral mock‑up, the orchestration stage is like microsurgery. For this application, String Ensembles would not be my first‑choice library, but where it does excel is in getting you to that point.

String Ensembles is great to work with. After you learn a few key‑switches, it enables you to write for strings in real time. One thing I would like to see, though, is the name of the current articulation in Engine. While it seems that should be evident from the sound, it isn't always, and I find writing with an open manual on my lap unnerving!

The built-in reverb supplied with String Ensembles is quite good and is, like everything in SE, very simple to employ. Interestingly, though, Miroslav himself doesn't gush over the included reverb and, in fact, states in the manual that a Lexicon or similar is preferred for the library. Hey, I told you this guy has integrity.

Let me say first that String Ensembles is a fantastic composition tool that adds great realism via an intuitive working method. I would certainly recommend it over other libraries as a starting point for your string writing, and, as I said earlier, it may become my main writing tool for strings. However, in terms of 'bang for the buck', it's a little feature‑shy.

Niggles include the fact that there's no looping on long notes, and while this was surely a choice made in order to 'keep it real', that's little consolation when the notes in your chord are ending at different times. There's currently a trend towards the provision of divisi‑able string sections in the current crop of string libraries, which may be too 'detail‑centric' for SE, but the lack of second violins seems like an unwise omission. Finally, while solo strings would be a nice touch, I can understand them not being included in a string ensemble library. However, the lack of trills is somewhat disappointing.

I believe SE to be a great complement to other libraries (which also fall short in certain areas) but I don't see it as being the one library to have if you can only afford one. I don't say this because it's weak, but because I think most consumers, after spending £600$1000 on a sample library, want to boot it up and be dazzled. That's not what this library does — on the surface, anyway. This library is for creating music.

There's no shortage of professional string libraries on the market at the moment. Los Angeles Scoring Strings is attracting the most buzz currently, due to its true divisi, programmable legato, and powerful rhythm tools. VSL are always contenders with their string libraries, and Hollywood Strings from EastWest is also a worthy contender for your string-library budget.

Miroslav Vitous String Ensembles is an excellent-sounding and highly usable string library. However, its lack of wow‑factor features may prevent it from ending up on some composers' wish lists.