Ever since the launch of high-power Apple Mac computers without PCI slots, such as the latest generation of PowerBook portables and the G4 Cube, users have been asking for a serious FireWire audio interface, and demand can only increase as FireWire becomes standard on more and more new PCs. MOTU's 828 answers that need and is designed to work with any Mac or PC audio software that supports ASIO 2 drivers and that runs on a computer with IEEE 1394 connectivity. MOTU's own software, such as Digital Performer, bypasses ASIO and talks to the interface directly, though a control panel providing the same options is used to set the interface parameters within other ASIO-compatible software. A Mac multitrack audio recording application called AudioDesk is bundled with the interface.

In a nutshell, the 828 unit is a mains-powered, 1U rackmounting audio interface for MacOS or Windows that can handle up to 18 simultaneous inputs and outputs at either 16- or 24-bit resolution. These are configured as eight analogue connections, two optical digital connections that can be used as either ADAT or TOSLink ports, and a pair of phonos dedicated to S/PDIF in and out. Connection to the computer is via a single FireWire cable and, like all FireWire devices, the 828 can be hot-plugged. No PCI card is needed.

All the analogue line out connections and six of the inputs use balanced TRS jacks operating at +4dBu and these are all serviced by 24-bit converters. The remaining two inputs are on Neutrik combo XLR/jacks, enabling them to accept line-level or mic-level inputs. Both XLR inputs have 48V phantom power, switchable as a pair, and both have gain controls with a maximum gain of 40dB. This is less than the mic amp gain of a typical mixing console, but adequate for normal vocal recording or instrument close miking. The other analogue inputs have level controls that operate as pairs 3/4, 5/6, and 7/8. The analogue inputs use very nice-sounding 24-bit, 64x oversampling converters, while the outputs use 128x oversampling. Sample rates of up to 48kHz are supported but 96kHz has been omitted to keep the cost down and also, presumably, not to place too much of a bandwidth burden on the FireWire link.

Included in the design is a through-monitoring system called Cuemix Plus for no-latency monitoring of input signals when recording or overdubbing, though with modern computers, latency will often be so low as to be insignificant. Outputs 1 and 2 are also fed to a further pair of balanced jack outputs for monitoring, and if Cuemix Plus is being used, the selected input (or input pair) is summed with the main outs. A front-panel Main level control adjusts the level of the main outputs, and there's a separate control to adjust the Monitor signal level. Two rows of eight LEDs monitor the audio input and output activity for the first eight channels, but there's no metering as such — that is generally taken care of by the host software. Additional LEDs monitor the S/PDIF input and output status, the optical in and out status and the clock rate.

Also fitted are an ADAT 9-pin Sync connector (see box, below) and a footswitch jack, which can be configured to two different sets of keyboard commands, one for opening and one for closing. This is included primarily to provide hands-free punching in and out, but can be reconfigured to control anything that is accessible via a keyboard key command. There's also a headphone jack for monitoring.

The 828 comes with an ASIO 2 driver plus support for MacOS Sound Manager, for the benefit of those who want to use it with iTunes or listen to audio CDs via the interface. The Mac AudioDesk software that comes with the 828 is based on the audio side of Digital Performer, and is actually a very nice stand-alone multitrack recording application. I suspect that most people will want to use the 828 with their own choice of software, but AudioDesk is a very useful extra to have thrown in. Installation is from CD-ROM and during installation, you're asked where the ASIO driver should be placed. My tests were done using my own Mac G4 system and installation was both simple and uneventful once I'd got hold of the correct version of the FireWire enabler (as prompted by the installation software). 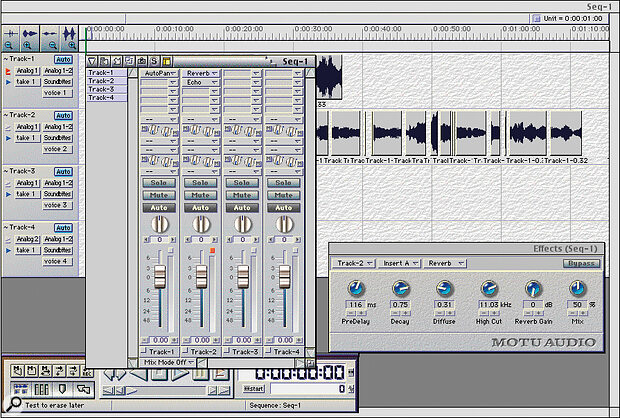 Once installed, the 828 options are accessed by means of a small Control Panel window where you can set the optical ports to ADAT, TOSLink or Off and set the sync status to internal, S/PDIF or ADAT 9-pin. It's here that you also set the key combinations to be triggered by the footswitch, the 'samples per buffer' size and the sample rate. The 'samples per buffer' size determines the latency, with smaller values equating to lower latencies. A buffer setting of 512 equates to 23 milliseconds, which is just high enough to affect the feel of a performance, but I had no problem with a setting of 256 or even 128, which brings the latency down to the point where the vast majority of people can't perceive it. Where your system latency is too high for comfort, 'through monitoring' is an option when recording audio tracks (although you won't be able to hear the effect of any plug-ins as you record), but it obviously doesn't work for virtual instruments.

The pedal input and Sound Manager support are both enabled via tick boxes, and a further window allows a monitor input source to be selected for use with Cuemix Plus. When the optical input or output is set to TOSLink, the S/PDIF phono connector will not be available for selection, as only one S/PDIF port can be active at a time. Note that you can only make changes in the Control Panel window when the host application is not running — I tried this with Logic Audio, and once Logic grabs the ASIO driver, you can't make any further changes to the I/O configuration or sample rate until you quit Logic.

Unlike MOTU's 2408, which also doubles as an audio routing system, the 828 is very straightforward: it simply gives you 18 inputs and outputs, the eight analogue channels numbered 1 to 8, the S/PDIF 9 and 10, and the ADAT channels 11 to 18. These are accessible from within the host application and any routing is done there in the same way as with any other audio interface. Once the 828's ASIO driver is selected in the host application, its inputs and outputs appear in the list of available selections in that software. On those pieces of software that are fully ASIO 2 compliant, ADAT 9-pin Sync appears as one of the sync options. 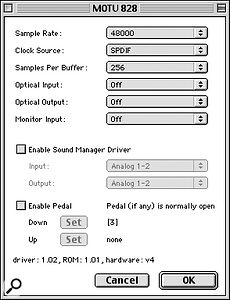 Once I'd installed the drivers and configured the Control Panel, the 828's I/O options appeared as choices within Logic Audio, after which the program ran normally. I made some test audio recordings and listened carefully to the playback to make sure there were no glitches — which there weren't — and found the overall audio quality was extremely good. I then went on to try the S/PDIF input with a 16-bit feed from the back of my DAT machine. This meant setting the Control panel to S/PDIF sync, after first quitting Logic to allow access to the Control Panel, and I also found I needed to set the sample rate value in both the 828 Control Panel and in Logic. This may be an issue with other software too, so don't just assume that once the driver is configured correctly, everything else is. Again the S/PDIF inputs were piped in smoothly with no glitching problems.

As an ADAT user, I checked the system's ability to transfer eight ADAT tracks at a time at 48kHz, which it did with absolutely no problem. In Logic, the audio moved across fine, but without the benefit of 9-pin sync time location, as was expected. Doing the same test in AudioDesk showed that the time cursor followed the ADAT tape location whenever 9-pin was selected as the sync reference.

Recording vocals and wooden flute via the mic amps again demonstrated that serious design attention has been paid to sound quality, though I felt a little more mic amp gain might have been useful for the benefit of anyone working without a sensitive capacitor microphone or when recording quieter sounds.

This has turned out to be a relatively short review because the 828 is one of those 'does what it says on the tin' products that just gets on with the job without fuss. The bundled AudioDesk software (which also includes some good-quality plug-ins) is easily powerful enough for Mac users who need multitrack audio recording without MIDI, but my guess is that most users will buy the 828 to run with software they already own. The fact that not all audio software fully supports the ASIO 2 protocol may mean that you can't use the ADAT 9-pin Sync for sample accurate location and synchronisation, which is regrettable, but that's hardly a problem of MOTU's making.

It is fairly obvious that MOTU are targeting the Digi 001 market as the 828 offers similar I/O facilities (although there's no MIDI port), is similarly priced and it comes with bundled multitrack audio software. However, the addition of ADAT 9-pin Sync and FireWire connection extends the flexibility of the interface considerably, and widens the market to include 'slotless' Mac owners. The inclusion of monitoring and mic amps (which the Digi 001 also offers) also provides a means for the serious user to run an 'all-soft' system without needing a mixer or separate mic preamp.

The audio quality of the unit is commendable, and though it doesn't support 96kHz, it's my contention that there aren't more than a dozen or so studios in the world that can exploit the full benefits of 96kHz recording, and I think I'd be safe in saying they'll probably choose something much more expensive than the 828 anyway! Instead, it provides a real-world solution to a real-world need, and in addition to providing a means for all those G4 Cubes and fast iMacs to function as serious desktop studios, it can also be used with more conventional Macs and PCs to free up another valuable PCI slot. In another context, the combination of an 828 and a G4 PowerBook could form a killer portable recording system. This is a very welcome new product which does its job without fuss, and the extent to which it is already back-ordered shows just how desperately it was needed!

In addition to its audio I/O, the 828 features an 9-pin ADAT Sync connector, but be aware that this only works if the host application fully supports the ASIO 2 protocol. Most of my tests were done with Emagic's Logic Audio, which doesn't, so the only way to lock up an ADAT in this case is via MTC or SMPTE, which requires an Alesis BRC, a JL Cooper SyncLink or a MOTU MIDI Timepiece.

You can transfer data to and from an ADAT using Logic and an 828 with no problem — it's just the sample-accurate location that doesn't work. When I used the included AudioDesk software, however, I got it to lock to the 9-pin sync and follow the tape counter position with no problem, and Digital Performer and Cubase VST should do the same.

The MOTU 828 is a high-quality audio interface offering analogue, S/PDIF and ADAT connectivity combined with the convenience of FireWire. It also includes a pair of mic amps and an integral monitoring system making it a true one-box solution.