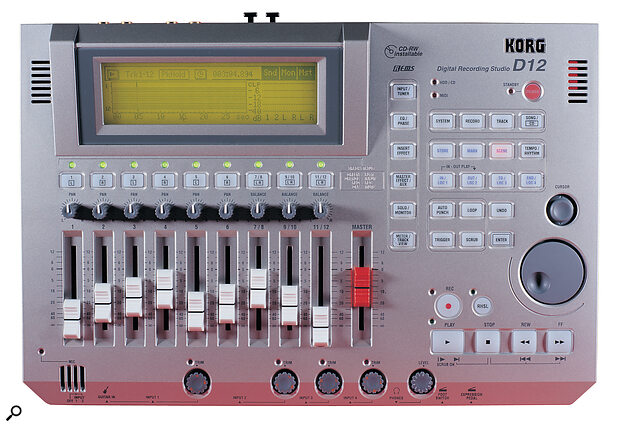 If eight tracks feels a little cramped, but 16 is just too expensive, then maybe 12 is the answer. John Walden investigates the new Korg D12.

Another month, another hard disk digital multitracker. The competition between manufacturers seems to generate new machines at an ever increasing rate. Not that those looking to purchase are likely to be worried; prices are falling and specifications rising. There are already a number of eight‑track machines, including the Boss BR8, Fostex VF08, Roland VS890 and Tascam 788, and now there is also an increasing number of 16‑trackers available, such as Akai's DPS16, Fostex's VF16, Korg's D1600, Roland's VS1880, and Yamaha's AW4416. However, there is precious little choice for you if your needs stretch beyond eight tracks, yet your budget can't stretch as far as 16 — so far only the Akai DPS12 has provided an intermediate track count.

Korg's new D12 12‑tracker is designed to fit neatly between these two markets. While clearly related to the larger D1600, with an impressive feature list, this machine retails in the UK for £600 pounds less than its larger sibling. So which corners have been cut to make this price possible?

The D12's mic, line and high‑impedance guitar input sockets are all conveniently arranged on the front edge of the unit, along with their respective gain controls. Headphone, footswitch and expression pedal sockets are also provided, as well as a built‑in microphone.

The D12 is capable of simultaneous playback of 12 uncompressed, 16‑bit, 44.1kHz tracks, with four tracks of simultaneous recording. Like a Baker's dozen however, Korg offer something extra in terms of track count as each of the 12 playback tracks has eight 'virtual' storage tracks. A 24‑bit mode is also available (with reduced track count) although, as the A‑D/D‑A conversion is only at 20‑bit, you need to record via the unit's digital inputs to get the full benefit of this.

The physical size of the D12 has been cut down, having more now in common with Korg's original D16 (reviewed back in SOS February 2000) than the D1600, yet the unit still remains fairly robust. There are four analogue inputs provided, all located along the unit's front edge. Inputs 1 and 2 will take XLR connections but, unlike the D1600, no phantom power is provided. Input 1 also has a dedicated guitar input on an unbalanced quarter‑inch jack and, when used with the built‑in guitar‑oriented effects, makes for very easy direct recording of guitar or bass tracks. There is a built‑in microphone, situated at the bottom left of the control surface, and the quality of this is perfectly suitable for catching those vocal or guitar ideas before inspiration disappears in a maze of mics, cables and preamps.

A SCSI connector is provided on the back panel for the connection of external storage drives, and there is also the option to install a laptop‑style CD‑RW drive within the D12's own casing for audio and data use — Korg's own‑brand model will set you back an extra £300. This side of the unit's operation is exactly the same as on the D1600 (see that review's 'Import & Export Duties' box for full details) — song data can be copied or backed up to CD, audio files can be input and output as WAV files, and mixes bounced to stereo can be written to CD as audio tracks.

While the D12's LCD may not be a touchscreen, it's at least large enough for a nice waveform display.

The layout and functionality of the D12's control surface is almost identical to that of the D1600, but with two obvious exceptions: the D12 has a smaller number of channel faders and does not feature the D1600's touchscreen display. In addition to the Master fader, the D12 has nine 45mm channel faders controlling the playback levels of the recorder's six mono tracks and three stereo tracks. The stereo format of the latter channels is fixed — each has a single fader, and single sets of controls for EQ, sends and balance. Above each fader is the pan/balance control and the single button used to switch between playback, mute, input active and record enabled modes. There are no dedicated Solo buttons, but a Solo/Monitor option provides a virtual equivalent via the LCD when needed.

The absence of the touchscreen on the D12 will only be an issue if you have experienced the D16 or D1600. On these units, this facility does speed up some operations considerably. This said, moving around the LCD using the D12's cursor keys is no more difficult than with any similarly equipped piece of high‑tech recording gear. If you've never had a touchscreen, you probably won't miss it!

The D12's mix automation is identical to that of the D1600. A built‑in snapshot‑based automation system provides up to 100 mixer snapshots per song, with each Scene holding volume, pan, EQ and effects settings. No crossfading between Scenes is provided. If the D12 is used in conjunction with a MIDI sequencer, it can be set to transmit mix data via MIDI, so that any fader movements or changes to pan, EQ or effects sends can be recorded to the sequencer. Playback of the MIDI data to the D12 then reproduces the required mix automation. As the faders aren't motorised, the Scene button provides a Mix View that displays virtual fader and pan pot moves in real time on the LCD.

The D12's EQ and effects offer identical facilities to those of the D1600. Fairly basic three‑band EQ, with sweepable mid‑band, is provided on both input and playback channels. Effects processing is based around Insert, Master and Final Effects types. A maximum of eight Insert Effects are available and can be allocated either to input sound sources or playback channels (but not to both at the same time). These include various guitar multi‑effects and amplifier simulations, compression, limiting, gating and parametric EQ. The two Master Effects have sends from each channel, and there is a wide range of available effects types, including some very usable reverbs. The Final effect is applied globally across the stereo mix and offers some effective mix‑processing algorithms such as stereo multi‑band limiting. All the effects types provide a reasonable amount of editability via the LCD.

It doesn't take long to become comfortable with the D12's operating environment. Once a new song has been created, laying down tracks is just a matter of routing an input to a channel number, record enabling the track, and pressing Record and Play. The trim controls and faders allow a wide variety of sources to be accommodated. Both the S/PDIF and CD can be used as audio sources, if required, and their signals routed to a particular audio track. With only four analog inputs, recording live drums might require a minimalist approach, but for the solo musician who tends to record in mono or stereo, one input pair could be used for recording new material while inputs three and four could be used to monitor any sequenced MIDI sources. Like the D1600, the D12 also includes a collection of rhythm patterns (mainly in four/four time) so anything from a click track to full drum sequence can be used as a recording guide.

The virtual track system provides some additional flexibility if 12 tracks is not enough. Alternative takes can be stored on a number of virtual tracks and then the best take (or even the best sections from each take) chosen when it comes to the final mix. The D12 allows you to bounce tracks to stereo if you wish and, if the original parts are retained as virtual tracks, these submixes can always be redone if they need further tweaking. There are two main bounce options and bouncing can be done to virtual tracks, though there is no dedicated mode for bouncing down a single track to free up its Insert Effects — you have to work around this by muting all tracks but one while bouncing.

Aside from fewer tracks, the most important differences between the D12 and the more expensive D1600 would be the lack of phantom powering, the use of 20‑bit as opposed to 24‑bit A‑D/D‑A conversion, and the provision of the touchscreen facility. The lack of phantom power will be significant to some musicians, so you'd need to have an external preamp or voice channel if you wanted to use a condenser mic to get the most out of your acoustic recordings. The reduction in converter resolution shouldn't really worry people unduly, and it has to be said that the audio quality of finished D12 recordings is really very good. As for the lack of the D1600's touchscreen, this simply makes some operations a little slower on the D12 in comparison to the D1600, though still no slower than with any other cursor‑driven operating system I've used.

But to concentrate on what it doesn't have is perhaps to miss that the D12 has most of the advantages of the D1600. Top of this list would be the uncompressed 16‑bit sound, decent track count, usable effects processing and the convenience of having almost everything you need in a single box. If you aspire to more than eight tracks, but your budget will not stretch the other side of the £1000 barrier, then the D12 is a serious and very capable contender. It is incredible what can be achieved at this price point within a box the size of small cereal packet!

The D12 is a very capable digital multitracker which includes most of the functionality of the larger D1600. If you know you need more than eight tracks, but you can't really afford to go up to 16, then the D12 is a worthy and workmanlike option.