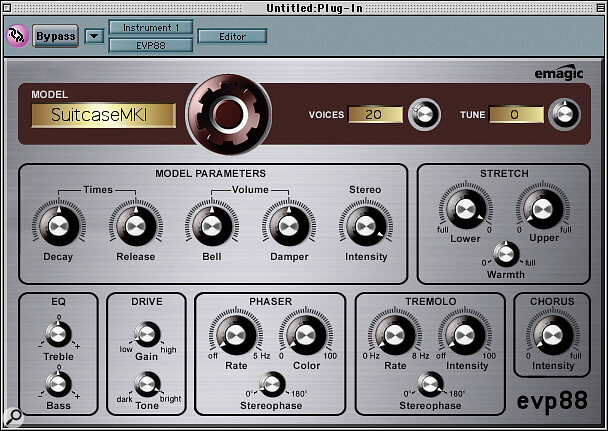 More and more vintage hardware instruments are now being modelled as virtual instrument plug‑ins. With EVP88, Emagic have turned their attention to electric pianos, producing a Logic‑only plug‑in which models several different piano types. Paul White discovers that the tines they are a‑changin'...

Emagic's EVP88 is an electric piano virtual instrument plug‑in for use with all versions of Emagic Logic Audio from v4.7, on both Mac and PC platforms. It uses modelling to emulate the various piano types it offers, and thereby claims to produce a more accurate response to playing dynamics than sample‑based instruments, while still allowing the user access to key parameters of the sound. Models of the Fender Rhodes Suitcase Mk I, the Fender Stage Mk I and II, the Wurlitzer 200A and the Hohner Electra are included, grouped into the following preset titles: 'Suitcase Mk I', 'Stage Piano Mk I', 'Stage Piano Mk II', 'Bright Stage Mk II', 'Hard Stage Mk II', 'Mk IV', 'Wurlitzer 200A', 'Soft Wurlitzer', 'Funk Piano', 'Electra Piano' and 'Metal Piano'. A cut‑down version of EVP88, called EVP73, is also in preparation. This offers only one model (the Fender Rhodes), but at least the plug‑in will be a VST instrument, allowing its use with sequencers other than just Logic.

The control panel is the same for each EVP88 piano, offering a virtual dial with which the user may scroll through the 10 available piano models. The usual menus are present for saving and loading user patches, and in addition to the basic piano, there's also a supremely nice Phaser, Tremolo and Chorus section. A couple of smaller dials at the top of the window set the maximum number of voices (up to 88) and permit fine‑tuning, and as the name of the plug‑in suggests, it responds to MIDI notes over the full 88‑note range.

Most electric pianos work by striking metal tines with hammers, so EVP88's models provide parameters directly related to this kind or mechanism. For example, there are separate Decay and Release controls, with individual level controls for the Bell and Damper components of the sound. Bell affects the metallic attack at the start of the sound, while the Damper mimics the sound of the mechanical dampers used in real electric pianos. As a concession to modern times, the stereo image has a width control, and to satisfy the real purists, there's adjustable stretch tuning for both the upper and lower parts of the keyboard. There's also a Warmth control in the tuning section that affects the general timbre of the piano sound, and that's in addition to the usual bass and treble controls, based around those in Emagic's Fat EQ plug‑in algorithm.

Those who have an affection for electric piano sounds will know that the end result is often a combination of amplifier/speaker overdrive and added effects, such as chorus, phaser or even wah‑wah. On EVP88, the amp side of the equation is looked after by the Drive section, which features adjustable gain and a Bright/Dark tone control. At higher gain settings, the sound gets pretty dirty, but in a convincing way. It's more than simple distortion, as there's none of that fizzy roughness you get by adding overdrive without speaker simulation.

Phasers are often looked upon as pretty tame effects, but the one provided here is an absolute classic, with Rate, Colour and 'Stereophase' controls. It's as simple to use as a pedal, but it gives exactly the right swirling quality to the sound. Anyone who remembers Hugh McKenna playing electric piano in the Sensational Alex Harvey Band will know just how expressive this combination can be, and Emagic's emulation comes so close that the result is pure nostalgia.

Tremolo is also a 'must‑have' effect to add life to electric pianos, and, like the phaser, this one has a so‑called 'Stereophase' control as well as the expected Rate and Intensity. Again the result is spot‑on. Finally, there's a Chorus effect with a single Intensity control. I don't know which chorus device this is designed to emulate, but it has a nice analogue pedal quality to it and works well with the piano.

As most regular SOS readers will know, I am to piano playing what Saddam Hussein is to lacemaking, so I enlisted a piano‑playing colleague to help out as well as an engineer friend who has worked on many sessions using the original Fender and Wurlitzer pianos. To hear EVP88 played properly was a revelation. The dynamics associated with those classic pianos was all there, along with the pronounced and progressive tonal changes that accompany playing dynamics. In fact, the only comments were that the keyboard didn't feel the same as those on the original instruments (this was fair, as I was triggering EVP88 from an unweighted keyboard) and that it didn't seem quite right having all the notes properly in tune! It was almost like playing an unnaturally well‑serviced electric piano.

Though the degree of tonal control offered by the front‑panel knobs might seem limited, EVP88 actually provides all the adjustment needed to produce natural‑sounding variations on the basic piano sounds, and being able to tweak the tine attack makes a lot of difference to the feel. Naturally you can automate any tweaks in real‑time via MIDI, and automating the effects could be particularly useful. My favourite preset overall had to be 'Suitcase Mk I', though the Wurlitzer's classic warmth and greater mellowness also came across with uncanny realism. The bell‑like tones of the 'Electra' piano were redolent of FM synth electric piano sounds, while the Funk and Metal variants were my least favourite, though still eminently playable in the right context.

In EVP88, Emagic have captured the spirit of the mechanical electric piano with the same care and attention to detail that Native Instruments lavished on their B4 tonewheel organ plug‑in. Indeed, because the electric piano is a dynamic instrument (organs normally have no velocity component), the result is all the more impressive; the difference between EVP88 and a Rhodes sample is instantly evident. To get the best out of this plug‑in, you need to be a good piano player; hearing jazz played on it is quite astonishing. Driving it from the MIDI guitar is less impressive, though the dynamism and excitement of the instrument still manages to shine through. If you're a Logic user and you play piano, this is a plug‑in that you can't afford not to own. And if you're not a Logic user, you still don't have an excuse, as the forthcoming VST‑compatible EVP73 isn't far off release!

EVP88 does for the electric piano what Native Instruments' B4 did for the tonewheel organ. It really is astonishingly good.