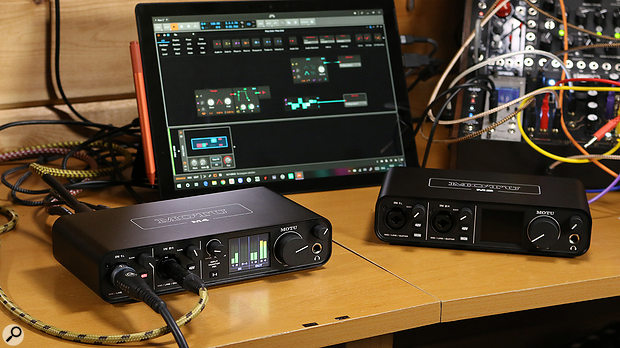 MOTU are not known for entry-level audio interfaces, favouring the more high-end side of multichannel audio, and so the M2 and M4 USB‑C interfaces with only two in/out and four in/out respectively came as a welcome surprise. It's a crowded market and so I was very keen to see what MOTU thought they could bring to the table.

Both units are wrapped in cold hard metal and feel plenty weighty enough for this sort of interface. They have decent feet to prevent them from being pulled off the desk by the weight of your cables and the knobs have a good feel to them with grippy surfaces. It's all good standard two in/out, four in/out audio interface stuff. What you are drawn to is the displays — they're rather nice.

Installation requires a driver from the MOTU website, where you'll also find a bundle of software and loops including a lite version of their own Digital Performer software. The only fly in the installation ointment is that the interfaces ship with a USB‑C to USB‑A cable, which is super for people without a USB‑C socket on their computer, but I'd suggest that one of the key reasons to buy the M2 or M4 is the very fact that you have a USB‑C port on your computer that you want to make use of. It's a small point, but there are so few bad things I can say about these interfaces that I have to make a meal of the ones I find.

The layout of two front-mounted XLR/TRS combi jack mic/line/Hi-Z inputs with independent gain knobs is so familiar that it's easy to miss the note-worthy touches that MOTU have included. Each of the input channels has its own +48V phantom power switch, making it easier to mix and match microphones. They also have their own Monitor button to enable direct monitoring. So you could monitor vocals directly through the interface on input 1 while running your guitar through virtual amp modelling software on input 2. I can't think of any other entry-level audio interface that offers these two features independently on each channel. A knob that mixes between direct and software output is present on the M4, but not on the M2. The M4 also has another single button to turn on direct monitoring for inputs 3 and 4.

Rounding off the front panel are nicely large monitor knobs and single quarter-inch headphone sockets with volume control. Oh, and the displays, which I'll come onto in a minute.

At the rear of both units is the welcome sight of MIDI In and MIDI Out on regular DIN sockets, and the more unusual sight of the audio outputs mirrored across balanced jacks and unbalanced RCA phono sockets. And for modular fans, yes, the jack outputs are DC coupled (see 'DC Coupling' box). Another noteworthy feature are the decent rocker-style power switches so, unlike many other interfaces in this class, you can turn the thing off without having to unplug it.

The rear panels of the M4 and M2 are identical except for the number of audio connections.

The audio resolution on offer is up to 192kHz. Both interfaces are quoted as having a 120dB dynamic range at the output and -129dBu EIN on the microphone inputs, which are remarkable figures at this price. The converter technology is the same ESS Sabre32 Ultra DAC that's found in many of MOTU's more high-end audio interfaces and extends to the headphones as well as the main outputs.

MOTU haven't just dropped a pair of decent audio interfaces into this entry-level market, they've raised the bar by quite some distance.

There's bags of headroom on these devices, whether you are plugging in dynamic or condenser mics or guitars with active pickups they're completely unfazed. And in all cases when monitoring or recording they're very quiet and the quality is superb. This is a good place to mention the displays. On most interfaces you might get a peak light or a couple of LEDs, but with the M4 and M2's full-colour LCD displays you have the sort of metering that you can actually use to help you gauge levels with some degree of accuracy. It's not crystal clear and doesn't have level numbers up the side, but it's by far the best metering I've seen on this sort of product.

The reported latencies are great and the reality isn't too far off either. At 44.1kHz they can go down to 16 samples with a reported round-trip latency (RTL) of 1.6ms. Taking some measurements and using the Oblique RTL Utility it was more like 3.8ms. At a more relaxed 64 samples I measured the latency at 5.9ms. Switching up to 192kHz they gave us options down to 64 samples which I measured at a convincing 2.5ms RTL. So the actual latencies are well within the bounds of usable real-time software monitoring. The playing of virtual instruments was excellent, even up to 128 and 256 samples. I also compared the performance of the supplied cable with a purely USB‑C connection and found no measurable difference. MOTU have done a great job on these drivers.

While there's no mixing, routing or monitoring software, MOTU have included a little driver feature that's going to win a lot of people over: Loopback. It's a virtual driver that routes audio from the output back into the inputs for recording internally between audio software. So if you were live streaming with something like Vmix or OBS Studio and wanted to demonstrate a virtual instrument or something in your DAW you could set the output to 'Loopback Out' and set 'Loopback In' as an input channel in your Livestream software. Or maybe you're podcasting and want to record the output of YouTube or another piece of software into your DAW; Loopback enables the internal recording connection. This is a stunningly useful feature for podcasters and live streamers and saves all that fussing around with virtual audio cables.

MOTU haven't just dropped a pair of decent audio interfaces into this entry-level market, they've raised the bar by quite some distance. They've gone significantly further on every aspect whether it's the individual +48V and monitoring buttons, the power switch, the low latency, the low noise, the metering, the DC coupling, the Loopback driver or the extra RCA outputs for easy connection to DJ gear; feature after feature that sets them apart from anything in their price range. Both the M2 and M4 are priced at the top of this bracket of audio interfaces, and you might have to factor in an additional USB cable, but they are worth it.

MOTU interfaces are favourites among the Eurorack community because they all tend to have DC coupled outputs. The M2 and M4 are no exception. The only other entry-level audio interface I've tested with this ability is the Native Instruments Komplete Audio 6 MkII which offers +/-2V. I measured the output of the M2 and M4 as +/- 3.6V, giving a very usable range of 7.2V.

The M4 and M2 are thoughtfully produced audio interfaces that go further and tick more boxes than anything else in their class.