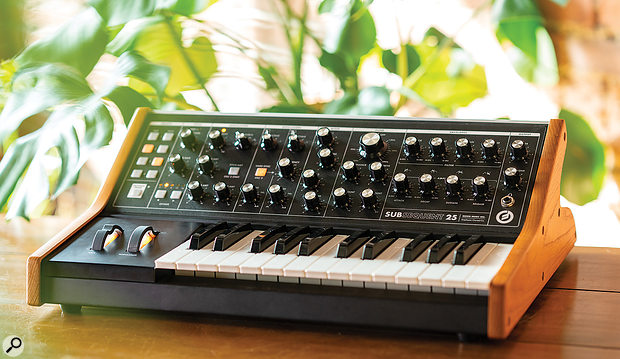 There's a lot more to Moog's Subsequent 25 than meets the eye...

Back in November 2014, Gordon Reid reviewed the Moog Sub 37. He was impressed by its combination of hands-on, uncompromising design and, of course, the classic Moog sound. At the time it represented a return to form for Moog. Gordon was suitably impressed. In the intervening years the analogue monosynth market has become ever more crowded and Moog's own Grandmother and Matriarch synths have set a new company standard for '70s analogue allure. So can the diminutive Subsequent 25 carve its own place?

For the purposes of this review I think it easier to see the Subsequent 25 as a trimmer, leaner Subsequent 37. If you want a quick reference of exactly what has changed, again see the 'Sub Vs Subsequent' box. For the most part, they share the same synthesis engine. The obvious differences are a shorter, 25-key keyboard and a dramatic reduction in physical controls to better match the Sub Phatty layout.

Despite the much simpler front panel, more features have been retained than you might think. A lot of lesser used functions remain as what Moog call 'hidden parameters', accessed via a Shift mode. There are two types of hidden parameter. The first can generally be turned on or off, or selected from a small number of options — things like enabling duo mode, pitch-bend ranges, MIDI sync, LFO re-triggering, etc — many of which had dedicated buttons on the Subsequent 37. These require the use of Shift mode and the keybed to select specific options. The second are variable parameters, which are accessed by entering Shift mode and using the front–panel knobs — things like extra envelope parameters, external input level and oscillator beat frequency, which don't have their own dedicated controls anymore. By hiding away a lot of the lesser used functions, Moog have managed to keep a great deal of the Subsequent 37's synthesis engine, whilst reducing the complexity, size and cost.

The Subsequent 37 and 25 are two-note paraphonic analogue monosynths. They both share the same core architecture with dual variable waveform oscillators, a sub-oscillator, mixer section with feedback control, and the classic Moog ladder filter. Both wield dual DAHDSR envelopes and LFO sections, although there is only a single LFO on the Subsequent 25, instead of the dual LFOs on the Subsequent 37. The sequencer and arpeggiator from the Subsequent 37 also didn't make the cut. The paraphonic mode, which Moog call 'Duo mode', allows for the two oscillators to be played independently on the keyboard. Oscillator 2 will track either the highest or lowest note, depending on what preference you have set.

The sloped design, which originated with the Moog Little Phatty and continued through the Sub Phatty and Subsequent 37, is retained. The steel chassis, wooden end cheeks and aluminium curved back panel look as beautiful as ever. Knobs feel sturdy and butter-smooth. In short, no compromises have been made to the build quality. The Subsequent 25 feels every bit as premium as the Subsequent 37. 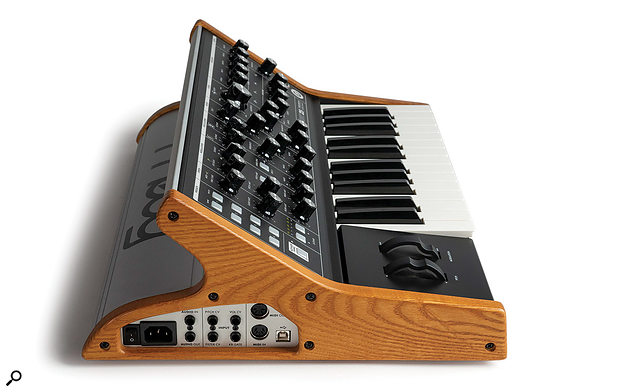 The Subsequent 25 has a side rather than a rear panel, and this features an IEC mains socket, audio I/O, CV and gate sockets, MIDI I/O and a USB socket.

The exact same connectivity side panel offers MIDI in and out via 5-pin DIN or USB, CV inputs for gate, pitch, volume and filter, audio in and out, and an IEC mains socket for internal 100-240 V, 50/60 Hz AC power supply. The keyboard retains its modulation and pitch-bend wheels and its velocity sensitivity, but sadly loses aftertouch.

The Subsequent 25's front panel sports 31 knobs and 13 buttons. The vast majority of these are direct synthesis controls, with the exception of nine buttons on the left which are grouped under the label of 'Presets'. As you might expect, these buttons allow you direct access to the Subsequent 25's presets — just 16 — which are grouped into four banks of four. This grid of buttons doubles up as a way to access many of the hidden parameters too. Unfortunately there are no labels on the panel to guide you in this endeavour, so unless you use a certain function a lot, you'll have to dive into the manual to find the exact combination of buttons needed. To mitigate this, the manual does offer a handy tear-out A4 reference card which shows all the hidden parameter button combinations. It slips easily underneath the synth, ready to be pulled out at a moment's notice. Alternatively, if you plan to use the Subsequent 25 with a computer, the free editor will give you access to all the hidden functions and much more (see the 'Software Editor' box).

Enough of the comparisons for now, let's focus on the synth at hand. The Subsequent 25's dual oscillators offer four octave transpose switches and a variable waveform control which sweeps from triangle through sawtooth, square and pulse. The second oscillator has an additional ±7 semitone detune control, and there's also a Hard Sync option which locks the second oscillator's phase reset to the first.

The oscillator section is where we find our first hidden parameters. Enabling Shift mode allows the Oscillator 2 frequency control to be used as a 'beat frequency'. This offsets Oscillator 2's frequency by a fixed amount, plus or minus 3.5Hz. The creates a linear constant detuning so that the beating of both oscillators against each other is constant, regardless of the note being played. Another hidden parameter, tucked behind the Hard Sync button, will enable oscillator phase reset.

Both oscillators feed into the mixer section, along with noise and the sub-oscillator, which is fixed as a square wave one octave below Oscillator 1. The mixer section is classic Moog. Turn any knob past around 12 o'clock and the signal will begin to overdrive the filter in a very pleasing manner. The external input can be mixed in by using the Shift mode and Noise control. With nothing plugged into the input, the synth's output will feed back into the mixer section for the classic Minimoog feedback trick, which is a great way of adding some grunge and further saturation.