From the mixer, the signal somewhat predictably heads to the filter. There really isn't much one can say about the classic Moog ladder filter that hasn't already been said. It sounds fantastic, let's leave it at that. The huge filter cutoff knob feels as smooth as Michael Jackson's criminal. It's joined by resonance, envelope and keyboard amount, and the Multidrive control, which adds anything from gentle tube-like warmth to aggressive clipping. One very nice feature, retained from the Subsequent 37, is the ability to change the filter slope. By default, it is set to the classic Moog 24dB per octave but you can change this to 6dB, 12dB or 18dB via one of the hidden parameter settings.

Moving over to the envelope section we find the two DAHDSRs, one each for the filter and amplifier. Despite being six–stage envelopes, there are only four knobs per envelope. Very sensibly, the attack, decay, sustain and release are all available on the front panel, whereas the lesser used delay and hold are accessed using Shift mode plus the Attack and Decay controls respectively. Velocity to filter amount is available using Shift plus Sustain, and velocity to decay/release via Shift plus Release. I find myself wishing that Moog had printed these Shift mode assignments on the front panel. There is easily enough room and it would have helped with the overwhelming number of hidden parameters.

Most of the time, the Subsequent 25 feels like one giant sound-design sweet spot. You'd be hard pushed to get a bad sound from it.

The modulation section houses the Subsequent 25's single LFO. It can produce triangle, square, sawtooth, inverse sawtooth and Sample & Hold waveforms. The waveform selector also has a setting for filter envelope, which allows the envelope to reach parameters that the LFO is meant for. The LFO range is around 0.1Hz to 100Hz, but it can be shifted to either a slower 0.01-10 Hz or a faster 1-1000 Hz via a hidden parameter. This means you can focus on a range that's right for the patch at hand, and even do some basic audio-rate frequency modulation with the faster setting. The range settings are saved per patch.

If MIDI Clock sync is more your style, the LFO can do that too. Once enabled, the Rate knob lets you select a clock division ranging from four whole notes to 1/64th note. The LFO can be routed to either pitch (either both oscillators, or Osc 2 only), filter frequency or oscillator waveform (both oscillators, or either one in isolation). There's a also hidden parameter to allow the LFO to reset on each Note On. 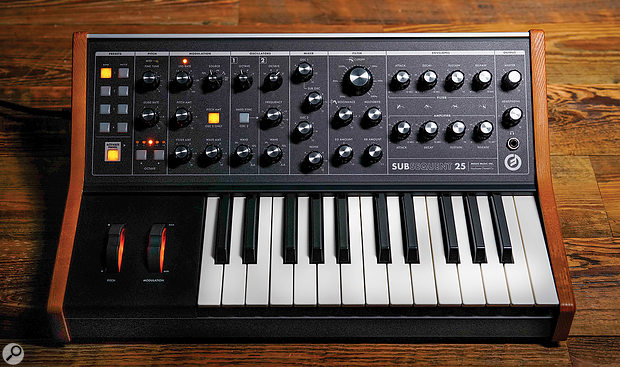 The remaining front–panel controls are more utilitarian. The output section provides two controls, one for master volume and one for headphone volume. The headphone jack is also conveniently located on the front panel. The Pitch section offers a Fine Tune control, which affects all oscillators, and a Glide Rate control. You can change the Glide type between constant rate, constant time and exponential, as well as toggling legato via Shift functions. Also in the Pitch section are the Octave Up and Down buttons, which transpose the keyboard by ±2 octaves.

The final control to point out is the Activate Panel button. As well as being used, in combination with the Bank 4 button, to enable Shift, Activate Panel will relinquish digital control of the front panel and set all parameters to be exactly the values you see in front of you. Of course, when switching presets, it's common to end up with knobs which don't reflect the values you're hearing. The Activate Panel button makes sure that you're hearing exactly what you're looking at. For any old school purists who don't believe in presets, this is the mode for you.

I must confess, I was initially worried by the seemingly drastic cut–down of controls on the Subsequent 25's front panel when compared to the Subsequent 37. The Subsequent 25 looks, on the face of it, like a much simpler synthesizer. In reality, though, Moog have done an excellent job of transplanting the beating heart of the Subsequent 37 into its new body. Not everything survived the surgery of course, with the big casualties being aftertouch, the second LFO, the arpeggiator and the sequencer.

A good portion of what was previously found on the front panel of the Subsequent 37 is now hidden behind esoteric button combinations and keyboard presses. This could be a problem for some. On the other hand, it's clear that Moog have thought carefully about which parameters are important and which might be used less. The Subsequent 25 could easily have felt like a crippled Subsequent 37, but mostly it feels like a very focused design which offers extra power under the hood for those that wish to find it. You could, in fact, use the Subsequent 25 only from its front panel, never accessing any of the hidden parameters, and you would still have a superb synth. With the Subsequent 37, I always felt I might be paying for features which I wouldn't use often. The two-note paraphonic mode, for example, whilst great to have, is not something I'm likely to use in every session. With the Subsequent 25, it feels more like a freebie, a bonus to be used when the time is right.

Sonically, the Subsequent 25 is exactly what you'd expect. I love the smooth analogue basses and Boards Of Canada-style '70s leads which fall effortlessly out. This synth is at its best when doing classic sounds, and the smaller front–panel design reflects this perfectly. Most of the time, the Subsequent 25 feels like one giant sound-design sweet spot. You'd be hard pushed to get a bad sound from it.

In the end, it's about options. Both the Sub Phatty and the Subsequent 37 are still sold by Moog, although I have a feeling the Sub Phatty's days are numbered. The Subsequent 25 is clearly a replacement. The choice, therefore, is between Subsequent 25 and Subsequent 37. That will boil down to finances, size, those few extra features and whether you can live with the hidden parameters system, which really isn't as bad as it might seem. I would gladly recommend the Subsequent 25 to beginners and experienced synthesists alike. In fact, I'm highly tempted to buy one myself. Or do I go for the bigger brother? Decisions, decisions...

The Moog Subsequent 37 is the obvious contender. You must decide if the extra octave, aftertouch support, arpeggiator, sequencer and second LFO are worth the additional price. The Korg ARP Odyssey offers a similar 'modern classic' feel and supports two-note paraphonic playing.

The Subsequent 25 comes with a software editor, free when you register your Subsequent 25 on the Moog website. It wasn't quite ready at the time of this review, but a glance at the equivalent Subsequent 37 editor shows us what to expect.

Available in both stand-alone and plug-in format (VST, AU, RTAS, and AAX) for both Mac and PC, the editor gives access-all control over the entire synth via a rather sleek lookalike graphical interface. The inclusion of plug-in formats means you can sequence and automate the Subsequent 25 directly from your DAW. The editor also covers librarian duties, so you can transfer and backup presets and access global settings. It connects via the USB MIDI port.

You may have noticed, during the course of this review, several references to the 'Sub 37' and many more to the 'Subsequent 37'. These are deliberate because the two are slightly different models of the same synth. The Sub 37 was the initial version released in 2014 and was based on the core analogue engine of the Sub Phatty. In 2017, Moog discontinued the Sub 37 and replaced it with the Subsequent 37, which had an improved mixer with double the headroom, a tweaked ladder filter, a better keybed and a more powerful headphone amplifier. The Subsequent 25 is also carefully named. It is not a Sub 25. It benefits from the same sonic upgrades as the Subsequent 37. The Sub Phatty and the Sub 37 do not.

The Subsequent 37 has the luxury of an LCD screen, where many typical 'setup' options could be found. With no LCD screen, the Subsequent 25 uses Shift mode and various button combinations to access functions such as keyboard transpose, pitch-bend range (up and down), legato glide, glide type, note priority, mono or duo mode, filter slope, LFO ranges, LFO keyboard tracking, LFO MIDI sync, MIDI setup, envelope looping, local control and even initialise preset. There are so many, in fact, that nearly half the manual is dedicated to these hidden parameters.

In practice, many hidden parameters are 'set and forget', and the ones you use often will become muscle memory. Alternatively, if you're using the Subsequent 25 with a computer, it might be easier to access these functions using the software editor (see the 'Software Editor' box).

The Subsequent 25, along with most of Moog's recent MIDI enabled synths, comes with a respectable MIDI specification. This includes MIDI channel selection, MIDI control changes or NRPN assignments for almost all parameters (your choice), and SysEx dumps of various kinds. It transmits and receives all of these. Additionally you can filter certain messages, for example, if you wish to send only keyboard data and not messages from the front panel.

At first glance it seems the Subsequent 25 has no aftertouch support at all. That is true for the built-in keyboard, which does not transmit, but with a suitable MIDI controller you can use aftertouch to control the filter cutoff. There are no other choices for destination, just the filter. Using a hidden parameter, you can adjust the sensitivity of the aftertouch, which will be saved with the current patch.

MIDI In and Out can be configured to use MIDI din ports, USB or both and you can select separate MIDI channels for input and output. You can also merge MIDI from the either din or USB port to allow MIDI Thru to USB, din or both outputs. This could be useful if you want to use the Subsequent 25 as a MIDI interface for your computer.