The prospect of combining the functionality of a mixer and an audio interface is an attractive one, for a number of reasons...

Setting up a studio can be a complicated business. Before you've even decided what equipment you need, you've got to decide on how you plan to work. Broadly speaking, there are two approaches: buy separate boxes for the various different facilities you need — an audio interface, a headphone amp, a monitor controller, and so on — or get a few units that each cover a lot of bases. Most mixers, for example, incorporate channel strips, headphone outputs and various routing facilities, which means that with a desk and a multi-channel audio interface, you're just a couple of microphones and a pair of monitors away from being able to do some serious multitrack recording. 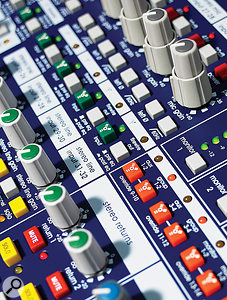 Some of the more advanced 'mixerfaces' have routing buttons that let you flip a channel from being fed an analogue input to receiving a digital input from your computer.Taking this latter approach to its extreme, many mixer manufacturers have started to incorporate multi-channel interfaces into their consoles, and there are many reasons why you might want to invest in a 'mixerface' rather than buying the two separately. For starters, there's less cabling to worry about! If you wanted to record, say, eight channels from a mixer into a separate audio interface, you'd need either eight separate cables going from the desk's outputs to eight interface inputs, or you'd have to buy an expensive eight-way loom. And that's before you've even thought about the best way to monitor your recordings! Since pretty much every mixer/interface has some facility for sending audio from the computer directly to an input on the mixer, you also won't have to worry about cables going back the other way, from your computer to the mixer.

This kind of simplicity is particularly welcome when you want to make a recording of a live performance. Interfacing all the necessary analogue equipment (mics, stage boxes, monitors and so on) correctly is a challenge in itself, without having to worry about using splitter boxes, or connecting looms to your mixer's direct outputs, and then connecting those to your computer! With an all-in-one mixer/interface, by the time you've got the gig set up, all you need to do is connect the desk to a laptop via USB or Firewire, and hit the record button in your DAW.

So far, we've talked only about recording from your mixer to your computer, but many of the consoles listed on the previous pages (particularly the more expensive ones) are also happy to pipe multi-channel audio in the other direction. This means that, at the press of a button, each channel on the desk could be passing a channel of audio from your computer, allowing you to easily use all of your desk's facilities — including EQs and routing facilities — for mixing as well as recording. This approach also makes doing overdubs and drop-ins a doddle: simply switch a channel back into record mode and you'll be able to hear what's being recorded in real time (and with zero latency) alongside all the existing tracks.

On The Flip Side

So is there a down side to the recording Utopia that is the combined mixer and interface? Well, potentially. Expandability is the first casualty: say you initially started off with a 16-channel mixerface, but later decided that you wanted to record 24 channels simultaneously. A desk upgrade might not be enough in itself — you could well find yourself having to buy a whole new interface too, in order to accommodate the extra streams of audio you intend to capture.

The other potential pitfall has to do with the computer side of things. If, in a few years, you wanted to upgrade your computer, you could find that it wasn't compatible with your mixerface. Firewire ports, for example, are becoming increasingly rare on laptops (indeed, many new Macbooks don't have them at all), so if you had a Firewire mixerface but wanted a new computer, you might need to either buy some kind of Firewire adaptor (a Thunderbolt type, say), or face the prospect of getting a new mixerface altogether.

Still, the bottom line is that, as long as you get a mixer/interface that suits your recording requirements, and is capable of handling a bit extra if you wish to record more channels, the combination approach ought to make your life significantly easier for years to come.

The Decision Is Yours...

Computer recording technology is now very mature, but many people still prefer to work with traditional mixing desks. So why not get a desk that fully integrates with your computer? Here's our pick of available options.

Behringer X32 digital mixer/audio interface.This digital console upset the market when it was first announced a couple of years ago, particularly because of the number of features on offer for the price. Although it's intended mainly for live use, its Midas-designed preamps should make it easily capable of producing quality studio recordings, while its built-in effects and motorised faders also help to make it suitable for mixing. 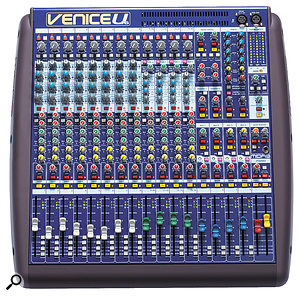 From live-console legends Midas, the Venice U-series are premium-quality live mixers that offer an extensive feature set — including six auxes and polarity inversion on the mic channels — as well as multitrack recording and mixing via USB. The Venice F-range desks offer identical functionality, but with Firewire computer connectivity. 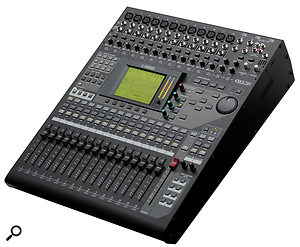 Based on the established 01V96, the new 'i' version has the same layout, effects and channel count (40 inputs, including 12 mic preamps, controlled via 16 motorised faders), but adds 16 channels of bi-directional USB interfacing. It can also be configured to work as a control surface with most DAWs. 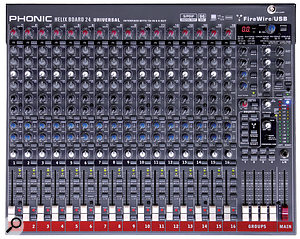 Despite its reasonable price, this 16-channel analogue desk is capable of up to 18 separate tracks to a computer, via either USB or Firewire. It also offers a stereo return from a computer, a digital S/PDIF output, and a built-in effects section. 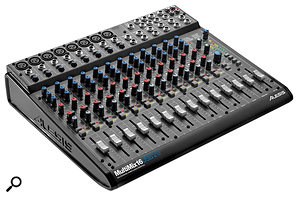 Although it's the lowest-cost mixer here, the Multimix 16 USB still allows you to record 18 separate channels (from any of its mono mic/line inputs, stereo line inputs and main mix bus) to a computer, via USB. All the usual compact analogue mixer features are present too, including two aux sends, a two-track return and a headphone output. 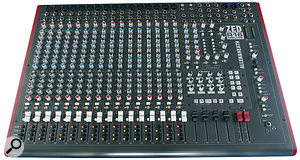 The Zed R16 from UK manufacturers Allen & Heath combines a traditional, high-quality analogue recording console with extensive Firewire interfacing, which means you can not only record the outputs of individual channels to your computer, but send them back the other way too, taking advantage of the mixer's analogue EQ and routing functionality during mixdown. It also features extensive DAW controller functionality. 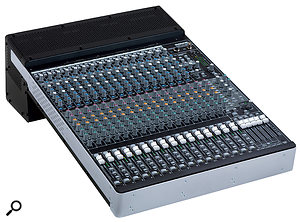 Like most of Mackie's new mixers, the 1640i uses the company's highly regarded Onyx preamps. Each channel has a four-band EQ, and the first two channels are capable of accepting instrument-level signals, eliminating the need for a separate DI box. Usefully, as well as the individual channels, you can route the aux sends into your computer, meaning that you can mix using VST plug-ins like traditional outboard effects. 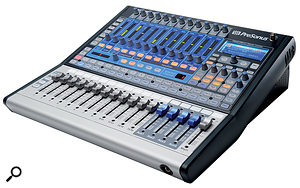 The baby of PreSonus' digital mixer range, the StudioLive 1602 is, as its name suggests, intended for both live and recording use. The control layout is designed to be familiar to users of analogue desks, and it ships with Capture, a software program that takes all the hassle out of recording live concerts to a computer. Uses bi-directional Firewire interfacing to record the outputs of any/all channels to your computer, or send them back the other way too, taking advantage of the mixer's digital EQ and routing functionality during mixdown. Dual onboard FX, no DAW control, non-motorised faders, but free Virtual Studio Live software allows offline editing/backup/transfer of all control 'scenes' (except analogue gain).