Alhough best-known for their synths and samplers, Native Instruments also have some impressive processors in their portfolio, and have recently joined forces with Softube to develop emulations of some classic studio hardware. The Vari Comp compressor, Enhanced EQ and Passive EQ were reviewed in SOS January 2013, and have just been joined by the RC24 and RC48 reverb plug-ins. As the names suggest, these are based on the classic Lexicon 224 and 480L algorithmic digital reverbs; the originals were heard on countless records at the end of the last century, and are still popular (and expensive!) today. All the common plug-in platforms on Mac and Windows are supported: VST, AU, RTAS and AAX. 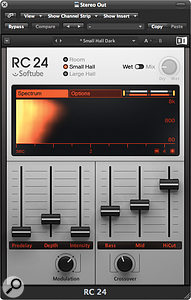 NI RC24.Like the original that it seeks to emulate, RC24 creates a rich, flattering sound with a hint of grit, while RC48 adds a little more density and realism. RC24 offers Large Hall, Small Hall and Room emulation programs, and models the old-school 12-bit converter sound of the original. RC48 provides just two hall algorithms, Hall and Random Hall, with control over all the usual parameters, plus Diffusion and Spread controls. It also incorporates some useful modulation options to mimic the Spin and Wander parameters that Lexicon developed to reduce metallic resonances and add complexity to their reverb tails. Both plug-ins have very similar interfaces featuring six sliders, although the function of these differs slightly. Both models have a Wet/Mix switch and a Mix control that is greyed out when Wet is selected.

RC24 has fader controls for Pre-delay, Depth, Intensity (of modulation), Bass, Mid and Hi-cut, plus rotary controls selecting one of four modulation types and the bass/mid crossover frequency. Clicking on Options provides input and output gain controls, the option to view or disable the real-time analysis display, and the option to include or omit quantisation noise.

The Depth parameter changes the apparent listening position within the room, higher settings equating to being at the rear of the room. As Depth is increased, the reverb tail dominates the sound, with the impression of the direct sound's contribution becoming more diminished. Reverb time is set using the Bass and Mid decay controls, while turning on the quantisation noise introduces some extremely subtle enharmonic noise components that would almost certainly be completely buried in a typical mix. The four different modulation modes introduce progressively more noticeable chorus-like movement within the reverb tail, and this effect is most noticeable on instruments such as piano, where you might choose to avoid using it. It is great on strings and vocals, though.

In use, RC24 has a lovely vintage sound with a nice 'steamy' decay, which has been described by some, when talking about the Lexicon original, as having a 'cats hissing' character! It's a very musical and versatile reverb that can be coaxed into delivering anything from small rooms up to large halls with many useful settings between the two extremes. Comparing RC24 with Universal Audio's Lexicon 224 plug-in, which runs Lexicon's original code, shows the NI/Softube emulation to be very similar in character, though the Lexicon 224 actually offers eight algorithms rather than just the three. The control settings don't translate exactly between the two and the Lexicon has more push-button tweak options, but a little fine-tuning should get you what you need. 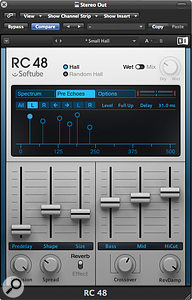 RC48 features six distinct early reflections or 'pre-echoes' which can be positioned by the user.

Although RC48's faders are similarly laid out, the first three are labelled Pre-delay, Shape and Size. There are rotary controls for Diffusion, Spread and Rev Damping, as well as Crossover; Damping affects the tonality of the whole reverb tail. There are the same options as provided in RC24, plus a further page called Pre-echoes, which shows a graphical representation of the time and level of six discrete delays up to a maximum of 500ms. These can be dragged around as you like, to create an early-reflections type of pattern that is overlaid on the reverb. Reducing Spread tightens up the reverb decay, while increasing it allows the end of the decay to wash away more gracefully. Size varies the apparent size of the modelled space and influences the decay time, along with the Bass and Mid controls. A further switch selects between Reverb and Effect. The Effect setting helps to create deliberately resonant sounds with relatively short decays.

Although RC24 and RC48 overlap somewhat in their applications, they each have a different fundamental character, and RC48's less grainy, more lifelike sound spans all manner of musical genres, as well as encompassing special-effect 'big' reverbs and small metallic enclosures. The Random Hall algorithm has a slightly larger-than-life sound, but both plug-ins sound pretty realistic over a very wide range of decay times. At the 'sub two-second' end of the spectrum, RC48 can be made to sound surprisingly plate-like, and those discrete echoes can be added to introduce some texture into the early reflections. If you need a convincing small room, it can do that, too. The ability to control the reverb tail shape is actually extremely useful, as the reverb decay in most real spaces is not exactly exponential, while a higher Space value adds a 'bloom' to the reverb tail.

The difference between Reverb and Effect mode is much more pronounced at shorter reverb settings. Engaging Effect mode makes short reverbs sound very resonant and metallic, while longer settings seem to slow down the reverb engine, rather as reducing the motor speed slows down a tape echo — allowing the reverbs to rumble on for half a minute or more at longer decay times! In either mode, reverbs can be held indefinitely if the Mid decay time is turned to maximum after the initial sound has hit. Diffusion changes the rate at which the reverb builds in complexity, and for non-percussive sources, lower diffusion settings can be flattering. However, if grainy is what you want, RC24 does it much better.

Both reverbs come with a decent library of presets to get you started, and because the pair of them can cover anything from vintage gritty to near-realistic, they could be the only two reverbs you'll ever need. Their sound comes very close to that of the originals but, more importantly, they are very musical and seem to have captured Lexicon's ability to allow you to really pile on the reverb while keeping the wet sound and dry sound properly integrated. In a word, classy.