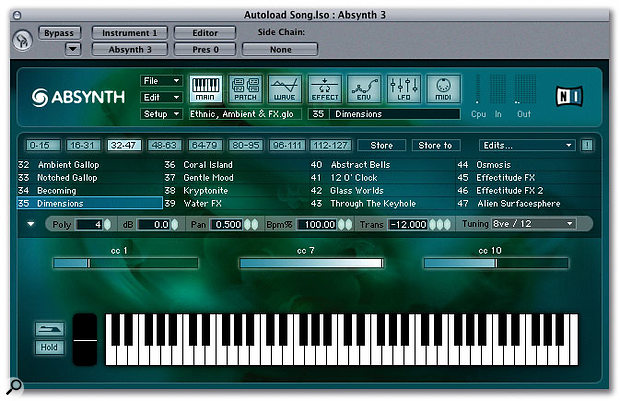 Absynth has always dared to be somewhat different to other software synths, and version 3 continues the grand tradition, with new effects, built-in frequency-shifting, and surround processing options.

Native Instruments' Absynth created quite a stir in the world of software synthesis right from its first incarnation, and Absynth 2 saw many of the shortcomings of the instrument resolved, perhaps most importantly by adding sample playback and the abilities to copy and paste module settings and to sync various envelopes and modulators to tempo. For reviews of the earlier versions, check out SOS December 2001 and November 2003. In version 3, a number of further worthwhile additions have been made, and the NI designers have also taken this opportunity to give the program a bit of a visual overhaul. If the original Absynth looked as though it was born in some tropical blue ocean, Absynth 3 has more of an air of algae infestation about it! Perhaps the best news is that you no longer have to do battle with both the plug-in and the stand-alone windows when editing patches within a plug-in: Absynth 3 now works like any other NI plug-in in this respect.

Perhaps the main reason for Absynth 's success is that it sounds very different to most other synths; although it can be used to create more conventional string sounds, bass sounds and so on, it really excels at generating complex, evolving pads and soundscapes. Though it is quite complicated to program from scratch, the ability to copy and paste sections of the sound-generating chain, introduced in version 2, makes it very easy to recombine existing elements to create new sounds, and of course the source oscillators can be changed to squeeze new sounds out of an old patch. What's more, registered users have access to a patch-swapping/downloading area of the Native Instruments web site, where there are already some creative sounds ready to load up and use.

Absynth 3 can be used in stand-alone form and as a plug-in under Mac OS X or Windows XP, and supports the VST, Audio Units, RTAS, Core Audio, Core MIDI, DXi, ASIO and Direct Sound protocols. The newly designed single-window interface comprises seven pages as before, though some features have been added and some graphical elements tidied up. Amongst the new features are support for a number of standard surround sound formats (3.1, 4.1, 5.1, 6.1, 7.1, 8.0) with envelope-controlled surround parameters, independent for all three Absynth channels with up to four dedicated parameters linked to envelopes at any time. Further variety is offered via the live processing of audio inputs, real-time fractal waveshape modification via envelopes, Unison mode, two new effects, additional envelope control and 256 new presets, as well as full compatibility with existing Absynth presets and patch libraries (and as before, user samples can be imported to use as oscillator sources in either WAV or AIFF format). Anyone who has already bought the NI Komplete package gets both Absynth 3 and Battery 2 at no extra charge! 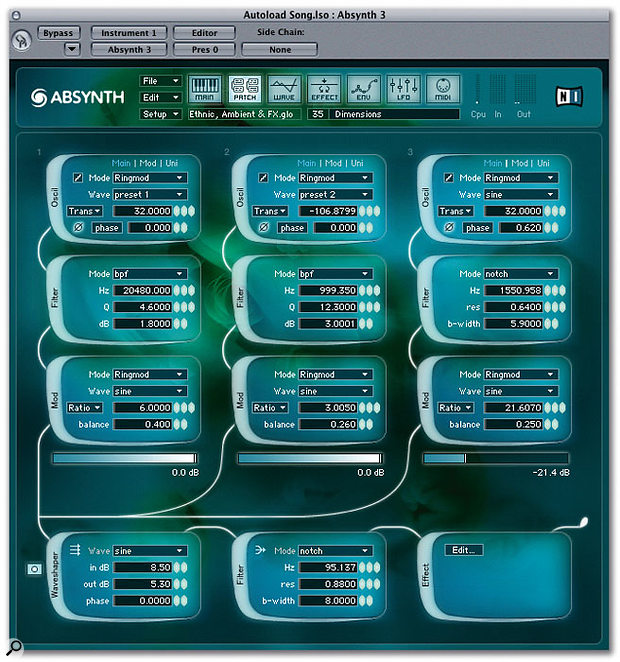 Though the graphics have been spruced up, the 'pod-like' patch-editing screen is still familiar.

Part of the secret of the Absynth sound is that up to three 'tone' oscillator channels can be used at once, but rather than these being restricted to any specific type of synthesis, they can be switched to use FM, subtractive analogue-style synthesis, ring modulation between two tones, a live source (for example, audio from another instrument or audio track), imported samples, single-cycle waveforms, user-drawn waveforms, samples treated to produce granular synthesis, and so on. Much of this was present in Absynth 2, but frequency-shifting (which is like ring modulation, but produces only the sum frequency, not the difference) and the ability to use live inputs are new, as is the ability to use fractal processing to add complexity to waveforms in real time (of which more in a moment). In all, there are now nine 'oscillator' source types from which to choose, plus 14 filter types available individually for the three sound generation and modification channels.

The other trick Absynth has always had up its sleeve is its complex 68-point envelopes, which is what makes it so good at producing shifting textures, rhythmic effects and so on. Allowing these to be sync'ed to tempo or via MIDI in version 2 greatly added to their usefulness when producing rhythmic material. In this version, the envelope display and management has been updated to include a time display, a variable-resolution grid (invaluable for creating accurate rhythmic effects) and a cursor showing the current position within the envelope. All the familiar Absynth effects are available, but these have now been joined by a new Echo module comprising three independent delays with low-pass, high-pass and phaser filters in the feedback loop. The other new effect is the Resonator, which can be thought of as a tuned, deliberately ringy reverb. It consists of a set of three resonators which offer delay with feedback and can be combined to achieve some unusual results that should go down well with dance producers.

Existing Absynth users will have no difficulty finding their way around Absynth 3 as most of the key features have been retained, though the new styling simplifies the layout of the pages slightly and also adds the aforementioned swirly blue-green background. A row of tabs along the top of the window allows the pages for the current Main Patch, Effect, Wave, Envelope, LFO and MIDI settings to be accessed directly from whichever page is currently active and a keyboard at the bottom of the Main window allows patches to be auditioned without a keyboard being connected. There's no way to play Absynth 3 from a QWERTY keyboard unless your host application offers this facility, and I know some users have been asking for this, as other NI products already have it.

It should also be noted that if your song contains Absynth 2 tracks, the sounds won't automatically be opened in Absynth 3, as it is treated like a new and different plug-in. Of course you can save the sounds in Absynth 2 and then open them manually in Absynth 3, but this is one frustrating limitation that seems common to all plug-ins that have undergone a major upgrade. Some kind of preference option that would allow the plug-in to directly open Absynth 2 parts where Absynth 2 was no longer installed would be the best option, but I don't know what obstacles the various plug-in hosting systems put in the way of this.

The Sound & The Fury

The sound of Absynth 3 has all the distinctive appeal of the original Absynth, as you might expect, although the new effects add a little more creative scope, as effects are an integral part of the Absynth 'sound'. Though the user interface has a new look, it is operationally very similar to the earlier versions with just a few additions to look after the new features. Being able to create synth patches that work in surround is a lot of fun if surround is a subject that interests you, and it can be particularly effective with the kind of evolving textural sounds that Absynth is so good at generating. Being able to apply frequency-shifting and use live inputs is also new, and although frequency-shifting by its very nature sounds somewhat atonal, it can be used in small amounts to add interest to a music part or in greater degrees to create non-pitched soundscapes.

The new ability to modulate the fractal modification of waveforms also opens up some interesting possibilities, and if you've experimented with the existing fractal processing, you'll know that even the simplest waveform can be turned into something very harmonically complex. The ability for this to happen dynamically, rather than being pre-applied to the waveform is useful for pushing those evolving soundscapes in new directions. 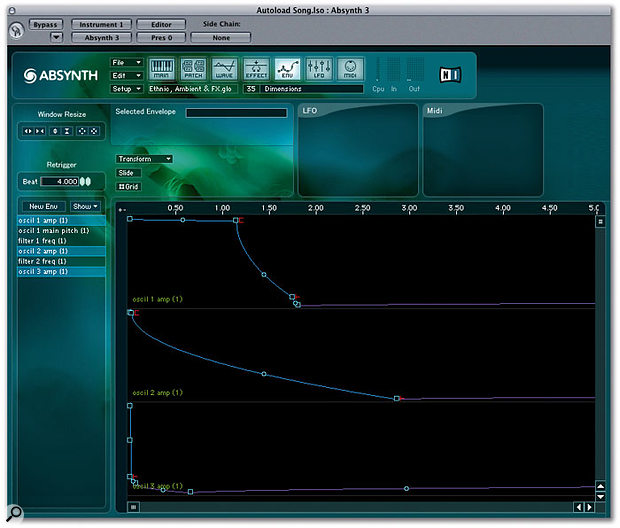 For all the additions, the essential character of Absynth is still very much the same as before and the all-new libraries that come with it tend to sit in 'abstract' territory, even though Absynth is also capable of creating more conventional musical sounds. For me, the instrument works best when you take an apparently conventional sound and then apply dynamic, evolving elements to it to give it a more organic quality, but if programming from scratch seems too much like hard work, you can still compile new sounds from the various elements of existing patches. Even working this way you're unlikely to run out of possibilities — there are plenty of new sounds in Absynth 3 to experiment with — but if you're prepared to dip into the editor to make a few experimental tweaks, you'll get a lot more out of it, even if you don't want to dive in too deep. Using samples you've created as oscillator waveforms is also a great way to totally change the sound of a factory patch.

Absynth 3 is an evolution rather than a revolution, but it's very worthwhile and capable of some fantastic sounds that I feel any other synth would be very hard pushed to approach, let alone replicate. Although the changes to the look of the new version don't make much difference to the operation of the plug-in, some aspects of operation have been sensibly streamlined; I am glad that the 'engine' window no longer pops up alongside the plug-in every time you want to do an edit. The envelope-controlled dynamic surround panning of the various elements is also great for anyone working in surround. You could say that the sound-generating capabilities are much the same as before but now you can stretch the sound a little further around the edges! Though some of the additions may seem subtle, they all add to the flexibility of this already remarkable instrument.

If you like accurate replicas of acoustic instruments or are a hardcore GM buff, Absynth is most definitely not for you, but if you're looking to create moving textures, demonic dance sounds, industrial mayhem or sound effects, it's a must. Brash or beautiful — it's all in here.