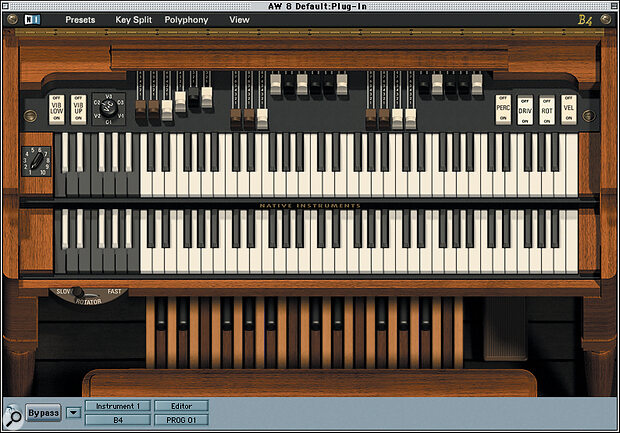 The instrument view shows the virtual B3 in all its glory.

Paul White boldly goes where no man has been B4!

The Native Instruments B4 is a virtual instrument designed to emulate the classic sounds of the Hammond B3 organ via physical modelling rather than sampling. It may be used either as a stand‑alone application or as a VST instrument and runs on both Macintosh and PC platforms. For the purpose of this review, I tested it as a VST plug‑in running within Logic Audio on the Macintosh.

Tonewheel Hammond organs are unique in that they generate their waveforms using a system of shaped wheels, fixed to a shaft, that rotate in front of magnetic pickups. The shape of the wheels produces the raw waveform, and drawbars are used to mix octaves and harmonics as a means of changing the tone. The tube circuitry of the older models also lends an interesting coloration to the sound, but perhaps the most important ingredient of the whole recipe is the Leslie cabinet, a rotary speaker system featuring separate treble and bass rotors.

Native Instruments have taken great care to model all aspects of both the Hammond B3 and the Leslie cabinet as closely as possible, but it is important to bear in mind that the model sets out to emulate how a Hammond/Leslie combination sounds when recorded in a studio, not when played live in your front room! It's even possible to adjust the virtual mic's angle and its distance from the Leslie speaker.

To install the software, PC users need to follow a series of steps outlined in the manual, after which their audio settings may need adjusting. As usual, an impressive list of cryptically named files is installed on the hard drive. Mac users simply click Install...

The software comes on an uncopyable CD‑ROM, which must be inserted from time to time, as per screen prompts. This is only mildly irritating, and is a far more benign form of copy protection than key floppies or dongles. The software is compatible with ASIO under both MacOS and Windows; for stand‑alone use on the Mac, MIDI can be routed to the software using OMS. Digidesign Direct Connect (Mac only) is also supported, for the benefit of those using DAE host systems.

As is customary with plug‑ins, the user can choose between a beautifully rendered overhead view of the instrument or a Control view featuring the control settings in more detail. The Control view provides access to some functions not available from the instrument view, such as Leslie parameters, mic distance, percussion characteristics, and overdrive depth. When the Percussion setting is switched to normal on a real B3 the overall level of the upper manual is reduced, but note that the Native Instruments B4 doesn't do this, as the designers feel most players didn't like it. Nevertheless, the tendency of the level of certain tones to drop slightly when they are used multiple times, as they may be when playing chords or octaves, has been modelled by the designers. I did also notice that B4 doesn't model the wind noise produced when close‑miking a Leslie, though most recording engineers actually try to avoid this noise. 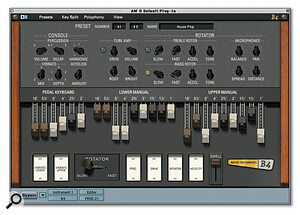 The B4's authentic controls include drawbars for bass pedals, lower manual and upper manual, plus the Rotator speed switch which vintage Hammond players used to operate with their knee!

The B4 has two manuals plus a set of bass pedals, all faithfully reproduced. MIDI channel 1 controls the upper manual, channel 2 the lower manual, and channel 3 the bass pedals. It's also possible to set up key splits to access the three manuals conveniently from your master keyboard. In true Hammond style, the sound is adjusted using traditional drawbars, and both the percussion feature and the key click of the real thing are modelled very convincingly, even to the extent of B4's key click sounding only on the first note of any legato phrase, just like its hardware counterpart. In fact, the only significantly non‑authentic feature of B4 (other than that it lacks the weight and size of the original!) is its ability to provide velocity sensitivity if required.

The bass‑pedal sound is set up using six drawbars, while the upper two manuals have nine drawbars each. Suitably vintage‑looking switches bring in the vibrato for the upper and lower manuals independently, while a six‑position knob selects from a choice of vibrato and chorus depths. Similarly styled switches are used to activate the percussion, overdrive, rotator and velocity functions. A chunky‑looking switch (which is normally operated from the mod wheel and not by your left knee, like the same switch on the original!) changes the Leslie speed from fast to slow. As you might imagine, the rotor acceleration dynamics have been modelled in some detail, with the option to adjust Leslie tone, speed and acceleration characteristics independently for the bass and treble rotors in the Control view. A swell pedal may be connected to dynamically vary the playing level, again much like the real thing, and you can adjust the tube‑amp settings to change the degree of drive, body and brightness in the sound.

Each of the upper manuals includes a set of reverse‑coloured keys at the lower end. As with the original, these are used for the direct recall of presets, but in the interests of progress the presets now include all adjustable settings, rather than just the drawbar positions. A huge selection of factory presets is supplied with the machine (most of them named so that you don't have to guess too hard too figure out what they allude to) and they range from the unmistakeably gritty ('Smoke on the Water'), via deliciously percussive ELP‑like timbres, to jazz and gospel. There's also the facility to store and name 120 user patches.

While I could probably find a little more fine detail to chew over, what really matters here is the sound. The tonewheel Hammond is no easy target for physical modellers — the Hammond sound is the cornerstone of contemporary keyboard rock, and even those who've never given the Hammond a second thought must be familiar with countless records that rely on its unique character. There's the haunting 'Visions of Johanna' and 'Like a Rolling Stone' by Bob Dylan, the music of the irrepressible John Mayall, all those Pink Floyd classics, tracks by Santana, Deep Purple, Keith Emerson and Brian Auger, Auntie Ethel down at the Duck & Hamster on a Friday night — the list is seemingly endless. What's most amazing is that, unlike most keyboardists, organ players have managed to squeeze an individual signature sound out of the Hammond. Perhaps that sound was at its peak in the '70s, but because of its inherent 'rightness' and flexibility it's still being used today.

What Native Instruments have done in the B4 is extraordinary. No doubt purists will find details to pick away at, but the bottom line is that this piece of software sounds extremely close to a recorded tonewheel Hammond and Leslie combination. Indeed, the Leslie modelling is the jewel in the crown of this virtual instrument, and the fact that it can be customised within each user patch means that virtually any Hammond sound heard on record can be emulated very closely. Happily, the B4's Leslie comes up as a separate VST effect in the plug‑in list, so it can even be used independently of the B4, but NI should also consider selling the Leslie by itself. The effect of the Leslie running up and down in speed is a big part of the feel of this instrument, so it's important to listen to a few records to find out how to use the feature most effectively. It's also important to apply the right amount of overdrive. Fortunately this is adjustable, and the sympathetic modelling gives it a warm, gritty edge without fuzziness.

It's all there: key clicks, percussion, overdrive, the sublime effect of a Leslie accelerating and de‑accelerating — the whole thing simply purrs. It's not easy to put the organic into a digital organ, but the team at NI have done an excellent job. There's no virtual knife to stick in the keyboard, but maybe it's time we moved on from that!

Using Logic Audio and an AudioWerk8 card with a G4, I found latency was too low to be noticeable — B4 played just like a hardware instrument. Because organs don't have pitch‑bend (other than when starting up the motors!), the pitch‑bend wheel isn't used and the mod wheel switches the Leslie speed between fast and slow, as mentioned in the main text, rather than performing its more usual role of vibrato depth control. Though you can switch on velocity sensitivity, most purists will leave this function off, but using an expression pedal to control the level adds greatly to the authenticity of certain styles (Blackpool Tower ballroom classics included!).

One of the really nice surprises for me was that B4 works extremely well when triggered from a guitar synth. Its positive attack lends itself well to guitar picking, and because there's no need for pitch‑bend it plays perfectly in poly mode.

A really nice tonewheel organ emulation that comes very close to the sound and feel of the real thing.