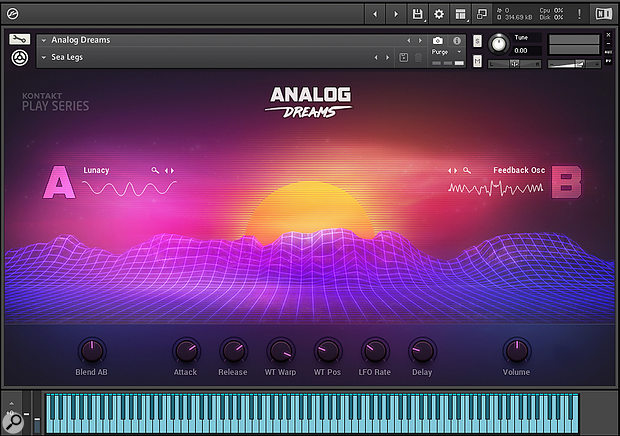 One of the new K6 Play series instruments, Analog Dreams. The Macro knobs control predetermined aspects of the sound depending on the currently selected snapshot, and are freely assignable to any MIDI controller. Clicking on the A or B waveform graphics presents a drop-down list of over 100 waveforms to choose from.

We explore what's new in the latest version of NI's flagship sampler.

After a considerable wait and much speculation, version 6 has finally acceded to the Kontakt throne. Although it's punted as 'Kontakt 6' by Native Instruments, the VST refers to itself in the plug-in list simply as 'Kontakt', with no number to signify the version. Whether this suggests that subsequent updates will be incremental (and free) or that there will be future payable tipping-points is not clear. Perhaps this is the last whole‑number revision of Kontakt as we know it, to be eventually replaced by a completely reworked product under another name? This is not a rumour, just to be clear — it's merely my febrile imagination running wild.

So is this update a game changer for existing Kontakt users? Does K6 look any different — bigger fonts, cosmetic changes, or a new colour scheme? Well, no. Visually, K5 and K6 are completely identical — the differences, though not numerous, lie under the hood. People whose use of Kontakt goes no further than loading and playing libraries exactly as they come out-of-the-box (be it in the free Kontakt Player or the full version) will probably view the new features as inconsequential and not be tempted to splash out on the full upgrade. However, anyone who creates their own sample material or simply likes to tweak and adapt (unlocked) existing libraries will find a handful of welcome additions.

A new component to the sample playback engine, the wavetable module expands Kontakt's potential for creating exotic and unusual synthesized sounds. It relies on having some ready‑made wavetables to hand, but as NI curiously don't include any in the package (why not?) I experimented by dragging in an 'ordinary' guitar sample to see what would happen. The results were not pretty, although I'm sure someone somewhere would love the strangled, unmusical noise it made. Fortunately, free wavetables can easily be found online, so I downloaded a suite of them.

Further experimentation layering two or more together, assigning them to independent groups and assigning various forms of modulation to their wavetables' positions, adding envelopes, filters and LFOs, produced some great results — not quite identifiable, yet eminently musical and very usable. If you're interested in creating your own wavetables, Serum appears to be one of the most popular wavetable creation programs, along with Waldorf's Blofeld Wavetable Creator.

Kontakt's effects have always been a mixed bag of the good and, frankly, the average. So it's nice to see some newcomers that fall into the 'good' category. The original Delay, workmanlike but a bit dull, now has a swanky new friend. NI's excellent Replica plug-in has long been my go-to delay; its inclusion in Kontakt is a real bonus. Feature-wise, it sits somewhere between Replica and Replica XT, with a choice of five delay algorithms: Modern, Analogue, Tape, Vintage and Diffusion, each with distinctly different characters, aided by features such as modulation, saturation, bit-reduction and tape flutter, depending on delay type. The stand-out algorithm for me is Diffusion, a combination of delay and the dreamiest reverberant wash — few things say 'to infinity and beyond' more effectively than this. Three new algorithmic reverbs, Plate, Room and Hall, are good foils to the Convolution and legacy types; the Room and Hall offer the additional luxuries of size, time, modulation and diffusion parameters. 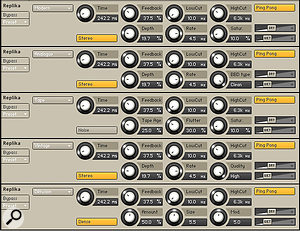 This composite screen shows Replica's five delay types, and the various parameters unique to each.The final new effect is Cry Wah, similar if not identical in tone to the one in Guitar Rig 5; however, unlike GR5 it sums stereo sounds to mono. It would have been nice to see revitalised versions of the Chorus, Flanger and Phaser, one-trick ponies that haven't been improved upon since the earliest days of Kontakt. If repackaged versions of NI's Choral, Flair and Phasis plug-ins were to find their way into a future update, that would do nicely, thank you.

Kontakt ships with three instruments in their new Play series; these are not part of the Kontakt library, being separate downloads that are activated via the Native Access app, and have their own entries in the Library Browser. All three make use of the wavetable module, so are not backwards compatible with previous Kontakt versions. Described very approximately, they are: Analog Dreams (sampled analogue synths that have been processed with outboard effects); Ethereal Earth (hybrid synth/acoustic instruments processed and layered); and Hybrid Keys (keyboard and piano related sounds sampled using microphones and experimental tape varispeed effects).

The parameters for Reverb II's Hall and Room algorithms include Size, Time, Diffusion amount and Modulation depth.Snapshot presets are provided in various sound categories, and all three instruments take on a common format, having two sample layers A and B with a balance control. There are six Macro knobs whose predetermined functions might, for example, control cutoff, effect level, LFO speed, or wavetable position, depending on the snapshot preset loaded. Drop-down menus for the A and B sample layers allow you to swap the preset samples for others — each Play instrument offers over 100 to choose from. Editing is fairly limited; you can adjust the Macro knobs, assign them to MIDI controllers, swap samples, adjust the A/B balance and save the result as a User snapshot, but that's about it. The Macro knobs' functions cannot be changed, and the instruments are 'locked out' so you can't go under the hood and tweak anything. That being said, there are some good sounds amongst the snapshots, but I suspect these instruments might appeal less to people with a decent collection of VSTs, and more to those less well equipped.

Those We've Lost At Sea

As new features are added, some older ones are taken away. A contentious issue for some will be the removal of third‑party sample library conversion. Basically, this means that files authored in K6 can only be read by K6 — not the industry standard Chicken Systems Translator, or anything else. Consequently, anything you've created yourself in K6 cannot be translated into any other format, so for example converting them to use on stage in your Montage, Kronos or Fantom is no longer possible. As for importing your treasured legacy Roland and Akai libraries into Kontakt, that's not possible either. Indeed, K6 no longer recognises a drive loaded with such CD-ROMs. The solution is to keep your older version(s) of Kontakt installed, if you have them. According to what I've read on forums, Kontakt 4.1 offers the most comprehensive conversions, but K5 still does a reasonable job at capturing the most crucial aspects — zones, velocity ranges and key mapping. Once you've done a conversion in an older version of Kontakt, that can then be loaded into K6 and re‑saved in that format if desired. I won't speculate about the politics or NI's reasoning behind this — there's plenty to be read on the subject in various forums, which may or may not give further insight into NI's long‑term plans on this matter.

Elsewhere, the Database has also been removed. This may have been done to improve the speed at which Kontakt instantiates, as loading a bloated database could slow things down and reduce sample memory. Given that most people would be searching by manufacturer or specific library anyway, it was probably one of Kontakt's least‑used features.

So, not the dramatic changes in functionality or design that some may have expected — a few gains here, a couple of losses there. The Replica delay and the new Reverb algorithms are a welcome addition, as is the wavetable module, but the upgrade seems to be more to the benefit of developers rather than the end user. Whether that makes the cost of upgrading worthwhile at this point in time is down to the individual. Nevertheless, I'll leave with this parting thought. Assuming developers make use of Creator Tools (implying that they have K6), there will inevitably be an increase of independent, non-NI licensed products authored in K6. Some independents may still opt to continue authoring in earlier versions, since instruments created in K6 are not backwards compatible, nor usable in the K6 Player. If and when they do take the upgrade path, it means that if you want to continue buying those developers' libraries, you'll have no choice but to upgrade to the full version of K6. It was ever thus in Computer Land.

Check out the SOS Tutorials video course on Kontakt 6.

Perhaps Kontakt's greatest appeal for sample‑library developers is the inclusion of Creator Tools, two stand-alone apps that run alongside an open instance of Kontakt (versions 5.8.1 upwards), to assist in the writing of KSP scripts and instrument construction. They comprise a Debugger to identify and correct scripting problems, and an Instrument Editor, enabling the automation of repetitive tasks such as sample mapping, velocity zoning and group creation, for example. As both apps rely on specialised scripting skills and a thorough understanding of Kontakt's architecture, their inclusion may not be a sufficiently compelling motive for your average musician to upgrade.

One area that caused me considerable frustration was in trying to set K6 up to have multiple stereo outputs. When instantiating K6 for the first time, only one output pair was present — however, Kontakt resisted all my efforts to add more. This was a painless process in previous versions, so the solution I hit upon was to load K5, save my multi-output setup as a preset, copy that to the equivalent K6 folder and load it into K6. That worked, so if you encounter a similar problem, now you know what to do.

From a musician's point of view this upgrade won't bring any advantages to their existing libraries; however, the new effects and wavetable module are nice additions that 'GUI-based' Kontakt tweakers and sound designers will enjoy. Serious sample‑library developers, on the other hand, will benefit the most from the inclusion of the Creator Tools.