NI's Reflektor is a reverb that combines simplicity of operation with a very musical sound. 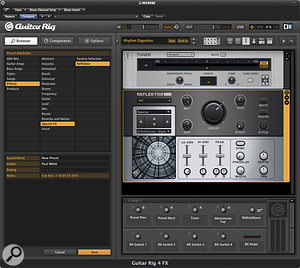 Convolution‑based reverbs are no longer mysterious and esoteric, but Native Instruments' Reflektor is a little different. It uses what NI describe as 'Zero Latency Convolution' technology, which, as the name suggests, is happy to operate without adding to the system delay, and has the further benefit of reducing CPU load. At the same time, it is able to deliver all the results you'd expect of convolution, from realistic rooms and halls to abstract spaces and dedicated sound‑design elements.

Reflektor isn't a stand‑alone plug‑in, but must, rather, be used from within the freely downloadable Guitar Rig 4 player, or a fuller version of Guitar Rig 4 if you have it. If your PC or Mac computer can run Guitar Rig 4, it should be compatible with Reflektor, which is authorised online using the NI Service Centre.

Reflektor comes complete with a library of over 300 impulse response samples based both on real spaces and on hardware reverb processors such as plates, springs and digital units. There are even synthesized IRs based on calculations describing virtual spaces, and you can load your own impulse responses if you need more scope. One advantage of the fact that Reflektor works inside Guitar Rig is that the designers have been able to create 60 additional presets that draw on other Guitar Rig modules too.

When first launched within Guitar Rig, Reflektor looks almost childishly simple, with a small cursor panel for navigating around the reverb categories and individual IRs within those categories. Separate knobs adjust the wet and dry levels, and there's a large knob that adjusts the decay time over a usefully wide range, from 150 percent down to around one percent. A further knob labelled Size affects both the time and timbre of the reverb, while Start trims away some of the front of the impulse response, allowing you to use just the tail of the reverb, or however much of it you want. There are buttons for Mute and for reversing the IR, plus the enigmatic 'R Pos' control knob, which is only active when the IR has been reversed and is used to determine which part of the IR should be reversed. Setting it to 0 percent reverses the whole IR as per usual; setting it to, for example, 25 percent keeps the first quarter of the sample unaffected and reverses the last 75 percent, so you get the correct early reflections followed by a weird burst of reversed reverb.

Clicking the 'extended view' arrow at the right of the window brings up a few more controls beneath the main window, but still nothing intimidating. To the right of the screen is a button for Sync, plus controls for pre‑delay time, stereo width, Depth and Pan. Depth creates the illusion of distance and has the effect of making the sound appear closer or further away, mainly by balancing the contributions of the early and late reflection components, while Sync locks the decay time and pre‑delay to the host DAW's tempo. The idea is to create a more rhythmic effect, or, as NI put it, "to allow the creation of pumping beats”.

To the left are controls that adjust the low‑ and high‑frequency decay times and the cutoff frequencies at which they're applied. There's also a single‑band parametric EQ for modifying the tone, and a picture of the acoustic environment, where one is provided with the IR: not quite the Altiverb 3D guided tour, but a nice touch just the same.

Though Reflektor is outwardly simple and is strictly stereo rather than surround, I have to admit that it sounds remarkably good. Other than the weird special‑effects section, which contains everything from washing‑machine parts to gas tanks, the IRs provided are all musically useful and sit well in a mix. The vocal and snare plates, for example, sound the way a real plate should, and there are also some synthetic plate IRs in there if you prefer the algorithmic sound of classic hardware. There are also plenty of useful small and medium spaces such as rooms and studios, where the Decay control manages to control the reverb time without destroying its character. Furthermore, if you want to shrink some of the longer IRs, such as churches or cathedrals, to give them a shorter reverb time, you can.

When I first loaded up Reflektor and saw its simplistic control panel, I was prepared to be underwhelmed, but in many ways it has turned out to be more useful in a real‑world mixing context than some far more costly and sophisticated reverbs I've tried. Control changes are fast and glitch‑free, just as the publicity claims, so it seems that Reflektor upholds NI's reputation for delivering just what it says on the box.

The 'big guns' convolution reverbs include Audio Ease Altiverb and Waves' IR1, while most DAWs now have bundled convolution reverbs, and there are also affordable alternatives such as SIR2 and Liquidsonics' Reverberate. However, Reflektor has a character of its own that makes it well worth investigating.

This apparently unassuming little reverb plug-in delivers a great range of workmanlike reverb and ambience treatments that get right to the point. If you're not convinced, download the demo.