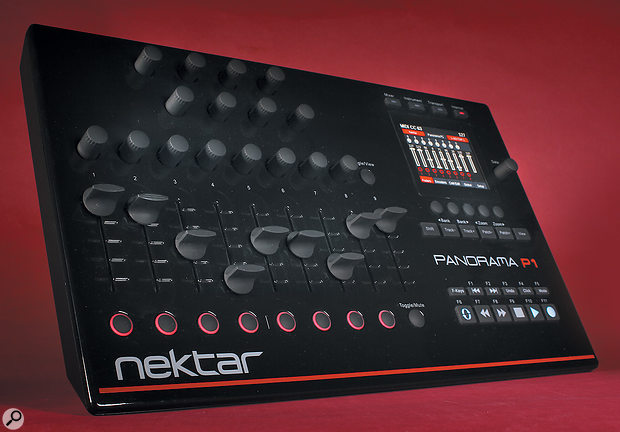 Nektar’s Panorama P1 is a control surface with a lot going for it — especially if you use Cubase or Reason.

If you spend a lot of time in front of your DAW, you may also spend a lot of time with your computer mouse. While the humble mouse is most certainly well deserving of its place in the history of technological progress, replacing much of that mouse control with a MIDI-based hardware control device can really speed up one’s work. I’ve tried a number of these over the years but, as yet, never quite found something that really matched both my needs and my budget.

One newer candidate is Nektar’s Panorama P1, a rather stylish-looking USB MIDI control surface. It’s compact, packs in a very respectable range of faders, rotary knobs and buttons, comes with dedicated support for Cubase (my main DAW) and Reason, and (compared to some of the competition anyway) is not particularly expensive. So might the P1 be my perfect partner? Let’s find out...

Physically, the P1 is attractively styled. It measures 387 x 235 x 44 mm and weighs in at 1.3kg; not ultra-compact but certainly not so big that space couldn’t be found for it in a fairly modest workspace. Thankfully, the controls themselves are suitably chunky and well spaced out; you will not find yourself knocking one control while trying to get your fingers on another.

The left/centre of the surface is dominated by 16 rotary encoders, nine faders with a 45mm throw and 10 buttons. Two of these — Toggle/View and Toggle/Mute — change the functionality of eight of the rotary encoders and the eight buttons beneath the faders. The right-hand section of the surface is a little busier. It features a full set of transport controls that, via the F-Keys button, can also have a second set of functions allocated to them. In addition, there is a large (86mm) TFT display, three sets of buttons for navigating within the display and switching between the P1’s various modes, and a single ‘data’ encoder for adjusting parameters or scrolling through menus. 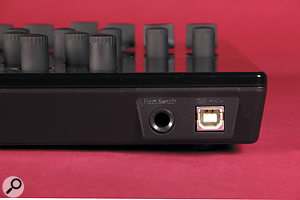 The back panel of the P1 features just a USB port and a quarter-inch jack socket for a footswitch.

The rear of the unit contains just a USB port and a quarter-inch jack socket for a footswitch. This could, for example, be used to switch record on/off but there are other options also.

The included Quick Start manual covers the very basic operation of the P1 as well as installation, while the necessary drivers are available from Nektar’s web site. The site contains instructions for setting the unit up, but I did have to do a little head scratching as the installation process requires a few steps. I think new users would really appreciate somewhat more comprehensive setup guidance. The purpose of the multiple MIDI ports that appear after the installation process, for example, could be better explained.

The P1 offers four modes accessed via the buttons located at the top-right. Internal mode essentially allows the unit to be used as a generic MIDI control surface with any MIDI-compatible software. In this mode, you would need to use a combination of the P1’s comprehensive configuration options and those of your software application to map the various hardware controls to (for example) your DAW’s controls. There is also the capability to save preset configurations for both the faders, encoders and eight LED buttons (beneath the faders), and, separately, for the F-Keys.

Having briefly experimented with this mode using the Cubase Generic Remote option, it seems very easy to use and, most helpfully, the TFT still gives you very clear visual feedback for whichever set of controls you choose to display. As with any generic hardware control surface, there is a little work to be done in the initial configuration but, once done, the operation seemed very smooth.

Despite my minor grumbles about the setup process, getting the P1 to work with Cubase 7.5 didn’t prove too difficult once I’d got my head around the various MIDI ports that appear after installation. The P1’s Mixer, Instrument and Transport modes offer deeper, pre-configured integration for Cubase and Reason users. With Cubase, as you might expect, Mixer mode is primarily intended for use with the Cubase Mixer window. The faders and their associated rotary controllers automatically link to banks of eight volume/pan controls. 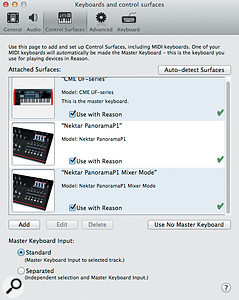 Configuring the P1 to work with Reason proved quite a challenge but I eventually got there. These rotary encoders can be toggled between pan and send levels (for up to eight sends) using the Toggle/View button. The Track and Bank (accessed via Shift) buttons allow you to navigate to individual tracks on the TFT or switch banks of channels in the Cubase Mixer. The ninth fader is linked to the master stereo output so you always have control of the overall output level.

The uppermost set of eight encoders are linked to the gain and frequency parameters of the four bands of EQ for the channel currently selected in the TFT display (not necessarily the same channel as selected in the Cubase Mixer). The buttons beneath the faders are multi-functional and can be toggled between select (where they select the track both in the Cubase mixer and the TFT), mute, solo or record arming; very useful. In all these various operations, the TFT provides very detailed feedback to help you see exactly what parameters you are controlling with the P1 hardware.

In all modes — including the Mixer mode — the base of the TFT contains some additional tabs that allow you to display different control options on the TFT. These tabs are accessed via the five buttons immediately beneath the TFT itself. Options include the EQ, Inserts, FX Sends, Channel and Q (Quick) Controls. There really are a lot of possibilities here as you can get access to the majority of controls within a selected channel strip if required. You can also select and edit insert plug-in parameters (which is quite impressive to use). In any of these supplemental modes, pressing the Mixer button returns the TFT to the default fader view.

If you have an instrument track selected in the Mixer, switching the P1 to Instrument mode gives you some control over the VSTi’s parameters. In most of the VSTis I experimented with (Steinberg and third party), there were multiple pages of parameters you could control, but the TFT defaults to showing eight parameters and these are linked to the uppermost eight encoders. Interestingly, these do not appear to be the same parameters as the first eight defined within the VSTi’s own Remote Device Panel, so I’m not certain where the assignments are derived from. Of course, if you do want to access the default Quick Controls then switching back into Mixer mode makes the same upper eight 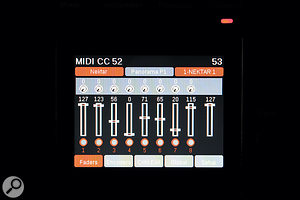 While the Mixer and Instrument modes will be where most time is probably spent, the Transport mode offers some useful additional options. The main transport buttons (located bottom-right) are functional all the time, but in Transport mode you can get control over the left/right locators, move the loop region, adjust the tempo and change the record mode, amongst a number of other things. If you have a footpedal connected to the P1’s rear panel you can also set the function that this controls.

Reason To Be (Less) Cheerful

While my P1 experience with Cubase was very positive, with Reason, initially at least, things didn’t go quite so smoothly. The main problem was getting Reason to identify the appropriate MIDI ports installed by the P1. Despite repeating the process as documented in the Quick Start manual and on the Nektar web site a number of times, I couldn’t get a working configuration. Eventually, after resetting the P1 using the ‘nkupdate’ application, uninstalling the drivers and then reinstalling, things suddenly sprang into life. I’ve no idea exactly where the problem was but it was a frustrating experience.

Once working, however, Reason and the P1 was an impressive combination. Mixer mode can be ‘locked’ to the Reason Mixer via Reason’s Options / Surface Locking feature. Equally, it is possible to lock Instrument mode to a Reason device rather than have it follow the current selection. This is useful if, for example, you want to lock the P1 on an effects processor while playing an instrument that is being processed through that effect. While I am not a regular Reason user, it was easy to see that the level of integration was similar to that provided for Cubase. Hopefully, Nektar can improve the reliability of the initial installation and configuration process as my experience would not represent a welcome start for a potential new user.

Once configured, with both Cubase and Reason, my overall impression of the P1 was positive; particularly with regard to how deeply it integrates with these DAWs. Less positive was my experience with the setup process. This could really do with being improved (and more fully documented) so that new users can get up and running without experiencing some of the frustrations I encountered.

Given the price, the controls themselves are sturdy enough and easy to use.The size helps here; even stubby fingers should find things fairly comfortable. The plastic construction means that you would need to take some care if you regularly transport the unit with a mobile rig, but permanently mounted next to a desktop, it feels robust enough to give extended service. Perhaps the only other (minor) downside is that the black gloss surface does show fingerprints; keep the included soft duster to hand.

Like any hardware control surface, the biggest obstacle to getting the best from it comes it two forms: firstly, the initial technical configuration and, secondly, retraining your brain to reach for the controller rather than your mouse. Nektar can’t really help you with the second of these — expect it to take some time and discipline — but they could perhaps make the first step easier.

As illustrated in the ‘Alternatives’ box, when it comes to hardware control surfaces, there are plenty of options out there with lots of different formats. Nektar’s Panorama P1, therefore, has lots of competition. That said, the unit packs a lot of controls into a stylish-looking device and does so for a relatively low cost. Provided you are prepared for the initial configuration process, and the inevitable re-learning that comes with any control surface, the P1 is a powerful device, particularly with those DAWs for which it provides pre-configured control.

There are a number of alternatives to the P1. For example, at the budget end of the market the Behringer BCR2000 and BCF2000 both offer good performance and excellent value for money. At a similar price to the P1 is the Icon iControls Pro, the Livid Alias 8 or the Novation Remote Zero SL MkII. For Cubase users, Steinberg’s CMC series of USB controls also offer an affordable and customisable solution. There are, of course, some excellent MIDI master keyboards that integrate a control surface within them and these include Nektar’s own P4, P6 and Impact LX and, while it is not quite the same tactile experience, if you already own an iPad, apps such as V-Control Pro, AC7 Core HD or, for Cubase, Steinberg’s Cubase iC Pro provide a different type of solution.

While the initial configuration of the P1 could be smoother, once correctly installed it provides plenty of control options, particularly with Cubase and Reason.