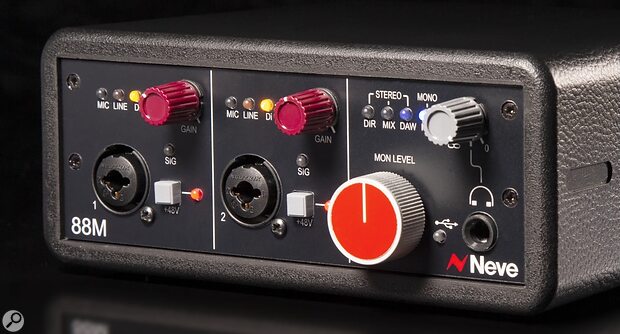 The 88M packs the sound of a Neve console preamp into a compact audio interface.

There are interfaces that emulate the sound of transformers, and there are 500‑series rack‑cum‑interface units that can host your choice of preamps. Until now, however, the only conventional interfaces I knew of that actually have input transformers were Steinberg’s UR‑RT2 and UR‑RT4. To most audio engineers of a sufficiently geeky persuasion, the words “transformer‑based mic preamp” bring to mind the name Rupert Neve. The Neve 1073 is the archetypal solid‑state transformer preamp design, and Steinberg’s UR‑RT interfaces represent a collaboration with Rupert Neve Designs. But they no longer have the field to themselves.

The original Neve brand and trademarks have changed hands several times over the years, but are now safe in the hands of AMS Neve. Manufactured entirely in Burnley, UK, the AMS Neve range still includes numerous variants of the 1073 circuit, as well as other Neve classics and more modern designs. And Neve’s latest product is... an audio interface with transformer‑based preamps. To be precise, it’s a bus‑powered, stereo desktop interface with two mic preamps and optical I/O for digital expansion.

Given the legendary status that now attaches to the 1073, it would seem an obvious move for Neve to use that preamp circuit in such a product. They haven’t, and for good reason. The 1073 is a Class‑A design, meaning that it’s relatively inefficient and therefore much too power‑hungry to be run from a USB or even a Thunderbolt bus. However, the 1073 isn’t the only classic transformer‑based preamp design in the Neve catalogue. The preamp circuit used in the state‑of‑the‑art 88RS console is a much more efficient design, and with a bit of tweakery, Neve’s engineers have managed to adapt it to run on USB bus power.

Functionally speaking, the resulting 88M is a USB 2 interface, but it needs to be connected to a USB 3 host socket, as it makes full use of the increased power delivery capability of the newer format. Even so, the internal power rails can’t be run at the same voltages as in the 88RS, which means that there’s less headroom on the inputs, and that the maximum output level is +18dBu rather than +20 or +24. Crucially, though, it uses the same proprietary Marinair‑branded input transformers.

Physically speaking, the 88M is quite a bit larger than most two‑channel interfaces, and is housed in a solid‑looking metal chassis with a Tolex‑style covering. This is a bit less than half rack width, and a bit less than 2U high, so could conceivably be housed on a 2U rack tray if you felt like doing so. The front panel boasts Neutrik Combo XLR/jack inputs with associated gain pots and independent phantom power switches. Pressing one of the gain pots cycles that input through mic, line and DI settings, and each input has a single signal‑present LED that illuminates traffic‑light style to let you know that your levels are on point.

What You See Is What You...