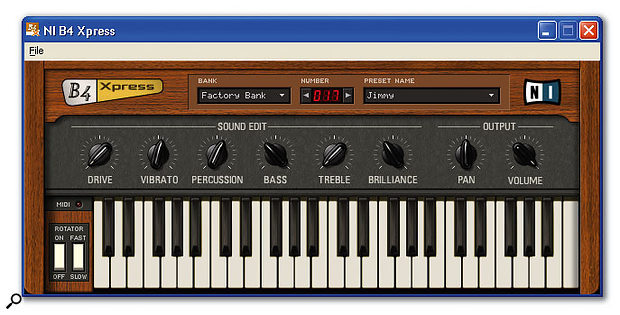 Native Instruments' Xpress Keyboards features cut-down versions of their B4 tonewheel organ emulation, Pro 53 Prophet 5 emulation and FM7 DX-alike. What's cut down is not the sound, but the amount of control available to the user. You can load presets and make tonal changes to them, but can't program your own sounds from scratch.

About 50 presets are available for each of the three instruments. Most of them are very usable, and deliver a good selection of classic Hammond, Prophet and DX7 sounds. In each case, six rotary controls provide reasonable room for manoeuvre when it comes to sonic tweaks.

B4 Xpress allows you to adjust the amount of overdrive, percussion and vibrato, and to switch the virtual Leslie on or off and between fast and slow settings. The obvious difference compared to the full-blown B4 is that there are no drawbars; tone controls are limited to Bass, Treble and Brilliance. This isn't too much of a problem, because the presets cover a decent range of drawbar settings, but you can't do those classic swells and fades, where you move the drawbars whilst holding notes.

The lack of control is more frustrating with Pro 53 Xpress. Anyone who's familiar with subtractive synthesis will find themselves thinking 'I'll just change that LFO speed and release time... oh.' The six parameters affect overall brightness, filter resonance, envelope attack and decay, 'Shape' and effects level, and don't offer enough control to be useful. A subtractive design like the Prophet 5 is pretty simple anyway, and there's not much to be gained by limiting the options in this way.

By contrast, the DX7 is notoriously difficult to program, and the way NI have boiled the controls down for FM7 Xpress works well. As well as envelope attack, decay and release times, you can adjust the overall brightess and the amount of harmonic content in the sound. There's an effects wet/dry mix knob (the effect in most presets is delay). Provided there's a preset that's in the right ballpark, these controls will probably be enough to get you where you want to go, and they'll certainly let you get there quicker than you would have done with a DX7!

When you need a classic keyboard sound fast, Xpress Keyboards might just be the answer.