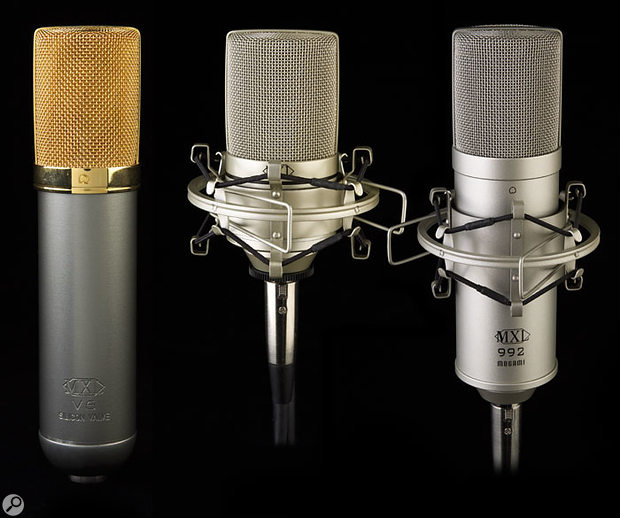 Three new large-diaphragm mics from MXL include a model which attempts to recreate the sound of valves using solid-state technology.

MXL mics are built in China, but their body designs and finishes are quite distinctive and their circuitry is optimised especially for each model. Under review this month are three of their new large-diaphragm mics: the new V6, with its intriguing Silicon Valve technology, the 990, and the 992.

Their V6 is slightly unusual insomuch as the California-based design team have deliberately sought to create a classic valve-mic sound using solid-state circuitry — it's no surprise that a FET is at the heart of their circuit, as FETs have similar characteristics to tubes. The FET circuit (the 'Silicone Valve') differs slightly from the FET preamps used in countless other capacitor mics, because it is biased to produce a similar level of second-harmonic distortion as is characteristic of a tube circuit. The output stage is transformerless, which surprised me, as the characteristics of transformers are often an integral part of what users think of as the tube sound. Full 48V phantom powering is required to run the mic, and the conventionally wired XLR output has gold-plated pins to ensure a good connection.

The capsule itself is fairly conventional. It's a one-inch cardioid element with a six-micron gold-coated mylar diaphragm and, like many classic mics, it is centre terminated. The mic's frequency range is quoted as being 30Hz-20kHz, but this is a pretty meaningless figure given that there are no limits specified and no frequency plot to refer to. The sensitivity is rather better specified at 22mV/Pa and the maximum SPL before distortion exceeds one percent is 130dB. This is high enough for all normal studio applications, including vocals, and is again typical for the type of microphone. There are no pads or roll-off switches on the mic, so in high-SPL situations, it may be necessary to use the pad on the mic preamp or mixer to which the mic is connected. At 1kHz, the dynamic range is a healthy 116dB. Noise-wise, the quoted figure is 16dBA, which is a respectable figure, though not as quiet as that of some of today's mics. A standard phantom-power supply (48V ±4V) is required for operation as it is for all three mics in this review.

Cosmetically, the mic follows the same classic cylindrical lines as the MXL V69, weighs in at 0.52kg, and measures 55 x 55 x 215mm. It is heavy enough to feel substantial, but not so heavy that it gives a mic stand a case of the droops. The mesh basket is finer than usual, and support metalwork is plated with 24-caret gold, which is certainly distinctive and also practical, as gold is very resistant to tarnishing. A green/grey metallic paint is used on the body, and the live side of the mic is denoted by the embossed MXL logo and the cardioid icon at the bottom of the basket.

Internally, the microphone follows the type of construction favoured by most Chinese manufacturers, where two metal rails run the length of the microphone, supporting both the circuit boards and the connector. The tubular body sleeve is held in place by a machined locking ring around the XLR outlet, and peeking inside reveals two glass-fibre circuit boards, one using surface-mount components and the other containing the discrete components that comprise the FET 'Silicon Valve' part of the circuitry. The standard of construction raises no concerns as regards reliability, but perhaps a little more could have been done to damp ringing in the metalwork, specifically the grille and the body sleeve.

The microphone is supplied in a neat, velvet-lined cherry-wood box with a separately packed shockmount. For recording studio vocals, a pop shield is also mandatory, but, as almost nobody seems to include these, one needs to be purchased separately.

MXL kindly supplied one of their V69 tube microphones for comparison, and as this is certainly the tube mic they tried to get close to with the V6, it provides an ideal reference. After working with the two mics for a while, I came to the conclusion that neither model sounded obviously tube-like, which is generally a good thing, as a tube mic with too much character has probably been engineered to introduce excessive levels of distortion. The V69 has a fairly neutral and open sound unless used close up, in which case the proximity effect can be used to introduce an enhanced impression of weight and depth. With some voices the mic can sound a little sibilant, but rotating the mic so you're working at around 45 degrees off axis fixes that nicely without otherwise dulling the tone unacceptably.

The V6 has perhaps slightly less lower mid-range density than its true tube counterpart, but it actually comes very close the sound of the V69. Because of the observations regarding sibilance, and by observing the way the mic behaved with typical vocalists, it's clear that there is a deliberate presence peak and, in my view, the mic is best suited to those seeking a more airy or intimate sound. It is perhaps less well suited to those with thinner-sounding voices unless it is used slightly off axis and close up to capitalise on the proximity bass boost. Because of its open, articulate sound, the V6 also works well on acoustic guitar and percussion instruments, making it a good all-rounder for the small studio.

By contrast with the V6, the MXL 990 is a more conventional mic, albeit with a short body, giving it a somewhat stubby profile. Most of the mic comprises the basket, with the electronics and connector occupying around one third of the length of the mic. Overall the standard of construction is what you'd expect from a competent mic of Chinese provenance, and the metalwork is nicely finished and satin plated in what the manufacturers describe as a Champagne finish. A shockmount is included, as well as a regular stand adaptor, and the whole kit comes in a practical foam-lined plastic case. The MXL 990 is designed primarily as a cardioid-pattern vocal mic, based around a gold-sputtered six-micron diaphragm (20mm) in a capsule that has a nominally flat response from 30Hz to 20kHz. There's a gentle presence peak centred around 8kHz, but the effect of this is fairly subtle and it helps balance the proximity bass boost when the mic is used close up.

The circuitry uses all discrete components (including a FET preamp) mounted on a single glass-fibre circuit board, and the output stage is transformerless. There are no external pad or roll-off switches (the MXL 992 model has both a low-cut switch and a 10dB pad). This is a strictly no-frills cardioid mic, but the technical spec is generally respectable with a 20dBA equivalent noise level. This isn't exactly low by today's standards, but is more than adequate for close-miking vocals. While the maximum 130dBSPL isn't as high as some, it's more than enough for routine studio work, though I probably wouldn't stick it in a kick drum. The sensitivity is a fairly typical 15mV/Pa. The MXL 990 weighs 1.2Ibs and measures 60 x 130mm.

As a vocal mic, the MXL 990 produces a subjectively neutral and nicely balanced sound with just a hint of high-end sizzle that can help out vocalists who have difficulty getting the definition they need. I used it on a serious session with a respected New Zealand female vocalist, and it suited her voice very well. It is subjectively quiet in this application and delivers a reasonable amount of weight without sounding muddy or out of focus. Being ruthlessly honest, I'd say that a lot of similarly priced Chinese mics offer similar characteristics, but that in no way detracts from the fact that this mic is capable of fine results when used carefully. It also works well as a voice-over mic and handles acoustic instruments with no apparent problems, though, as usual, a pop shield is essential when recording vocals.

Interestingly, the cardioid MXL 992 has a similarly sized basket to the 990, but utilises a larger 25mm capsule, and the body is physically around twice the length of that of its sibling. Again both a shockmount and a stand adaptor are included, but this time the case is aluminium rather than plastic. Once again the construction is what we've come to expect from most Chinese-built microphones insomuch as the main glass-fibre circuit board is bolted to two metal struts that also support the XLR output connector. A second circular board just below the basket holds the 10dB pad and high-pass filter switches — the filter rolls off at 6dB/octave below 150Hz. The circuitry is again all discrete and the output stage is transformerless. Both the switches are miniature toggles that protrude from the body just below the basket.

The capsule's six-micron diaphragm provides a nominally flat response from a little over 20Hz to 20kHz, with a subtle presence peak centred around 8kHz. In general this is similar to that of the MXL 990, but the graph shows the response curve to be noticeably smoother and flatter. Equivalent noise level is lower than average at 10dBA, and while the maximum SPL isn't as high as some (130dB, the same as for the MXL 990), it's more than enough for typical vocal and instrument applications. The sensitivity is again 15mV/Pa and the overall weight is 2Ibs.

By way of performance, the MXL 992 is quieter and smoother sounding than the MXL 990, with a less obvious high-end sizzle, but otherwise it feels quite similar in character. Where the extra high-end bite isn't needed, I feel it produces a more natural, homogenous sound than the MXL 990, but that shouldn't detract from the fact that the MXL 990 is still a very competent mic.

While the V6 costs a little more than typical 'me too' studio mics, it is in no way expensive and its distinctive styling is refreshing in a world where everyone seems to borrow from the original layout of Mr Neumann's classic models. If you're expecting a thick, treacly tube sound, then you may feel disappointed, but in my experience it's very hard to tell a good tube mic from a good solid-state mic anyway — the most obvious-sounding tube mics are usually deliberately hyped and may end up being one-trick ponies that suit only one particular style of vocal. Certainly the V6 has a lot in common with the V69, though you can just about tell them apart in a direct comparison.

If you're after an affordable all-rounder that will sound good with a range of vocal styles and instruments, then the MXL 990 is a strong contender, though as pointed out earlier there are lots of similar-sounding mics at a similar price. The more expensive MXL 992 has a smoother, classier sound (as well as pad and roll-off switches) and still offers good value. My only issue with many of the current Chinese-built microphones is that their circuitry is often no quieter than the classic mics designed 50 years ago, and while the MXL 992 has a good noise spec, I can't see why the other two shouldn't be just as quiet given the improvements in components, circuit design, and assembly methods over the past few years. In terms of UK pricing, the MXL 990 and 992 aren't any cheaper than most of their competition, although the street price appears to be quite heavily discounted by many dealers.

The MXL V6 gets very close to the sound of the tube V69 at a lower cost, and offers the same classic good looks. Best suited to singers who need more 'air' and high-end projection. The MXL 990 and 992 are more conventional, but still offer a good combination of sound quality and value.