I've reviewed a good number of Nine Volt Audio's BPM Flex Series loop libraries now and they've been uniformly excellent in both inspiration and execution. So I was delighted to receive their latest collection, which applies their painstaking sampling methodology to the task of capturing a selection of performances on a Hammond B3 organ (along with its accompanying Leslie rotary speaker). 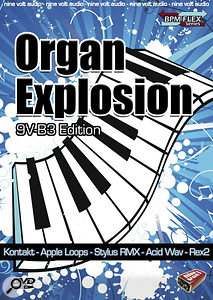 As with all the BPM Flex Series titles, flexibility and speed of use is clearly of the highest priority. In order to ease tempo‑matching to your project, Acidised WAV, Apple Loop and REX2 formats are all provided, the last carefully prepared so that the performances can be stretched across a commendably wide range. More than 350 pairs of loops are included within 20 genre‑themed folders, each pair of files made up of compatible left‑hand and right‑hand elements. These loops can be mixed and matched to some extent within the folders — harmonies permitting — so it's sensible that the loop filenames have been furnished with harmonic annotations.

As far as musicianship is concerned, organist Ryle Prewett delivers convincingly stylish playing in a variety of genres, including the expected gospel, blues, rock, boogie and funk, as well as some easy listening, Latin and cinema organ thrown in for good measure. However, despite solid rhythmic groove and frequent impressive flashes of virtuosity, I felt that there was something just a fraction too laid back about some of the phrasing, such that this library didn't feel as instantly engaging as the other Nine Volt Audio titles I've auditioned.

The recorded sound is rich and full, showcasing a good range of different tones, but the Leslie effect does present some problems. Firstly, the rotations are inevitably unlinked between any two files, simply because they were recorded in different passes. While this doesn't bother me too much when the speakers are rotating at a constant speed, it does rob the occasional expressive speed changes of a good deal of their gut‑wrenching appeal. Furthermore, when an overdriven speaker tone is used, the result ends up sounding a bit too polite; two notes distorted individually don't sound the same as a pair of notes distorted together.

All that said, if you're not too purist about such nuances, this library still represents excellent value for money, given its excellent usability. Taken one hand at a time in REX2 format, these loops can slot into existing arrangements with ease, while the musical quality of the 'both hands together' combinations gives ample scope for developing interesting song structures based on the organ's harmonic lead. All in all, then, this is a worthy addition to Nine Volt Audio's constellation, even if it's not quite its brightest star. Mike Senior