These nearfield ribbon monitors deliver a less fatiguing sound than some — but does smoothness come at a cost? 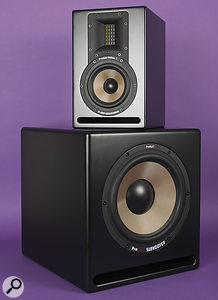 French company Prodipe surprise us on a regular basis with the quality and value of their products. Like many other companies now, they achieve this, at least in part, by designing in the West but building in China, where the build costs are lower. Their Pro 5 Ribbon monitor speaker is the smaller brother of the Pro 8 Ribbon that we reviewed last year, and it's designed to be used either on its own as a small nearfield, or along with a subwoofer as a 2.1 monitoring system. Our review system included the company's Pro 10S subwoofer, so I was able to try both configurations.

Although the Pro 5 Ribbons may appear fairly plain at first sight, they're actually rather nicely finished, with slightly rounded corners and a black satin coating. These little active, two‑way monitors measure just 291 x 196 x 240 mm and weighs 7kg each. Like the aforementioned Pro 8 model, they feature a ribbon tweeter, and there's a slotted bass reflex port at the bottom of the front baffle, along with a blue LED below the tweeter to indicate whether the speakers are powered up.

The ribbon driver measures one inch by two, and the five‑inch cone driver utilises a glass-aramid composite cone, which is suspended in a rubber surround. Both drivers are recessed, so that they're flush with the baffle.

The overall amplifier power is rated at 75W, with a THD figure of 0.05 percent at the HF end and 0.02 percent for the bass/mid. The crossover frequency is set at 3kHz, and a 45Hz subsonic filter protects the speakers from excessive low‑frequency energy. Prodipe claim a frequency response of 50Hz to 30kHz, but I really wish people would specify whether these figures are between the ‑3dB points, which would be more meaningful!

Connections on the rear panel comprise a balanced XLR analogue audio input, a balanced TRS jack input, and an unbalanced RCA phono. Mains power comes in on the usual IEC connector (which is switchable for 110 or 230 Volts AC operation), and there's a volume control, along with a separate level trim for the high frequencies that runs from ‑2dB to +1dB in 1dB steps. 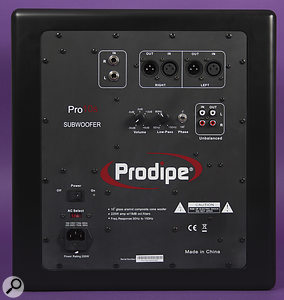 The rear panel of the Pro 10s subwoofer, which includes both balanced and unbalanced analogue inputs.

The Pro 10s active subwoofer that completed the review set has a front‑ported, almost cube‑shaped cabinet (measuring 382 x 355 x 398 mm) and provides a peak power of 225W (150W RMS). Its 10‑inch driver is a long‑excursion design, again using an aramid composite cone, and the whole subwoofer weighs in at 17.7kg. Active filters, comprising a variable low‑pass filter (50Hz to 150Hz feeding the subwoofer amp) plus a fixed 80Hz high‑pass, set the crossover between the subwoofer and the monitors. The subwoofer covers the frequency range 36‑150Hz ±1.5dB (which I translate as being equivalent to within 3dB), and there's also a 'phase' (ie. polarity‑invert) switch, which you'd normally set in whatever position gives the loudest perceived bass.

The audio input and mains power options are the same as they are for the Pro 5 Ribbon. The 80Hz high‑pass-filtered outputs that feed the main speakers are presented both on balanced XLRs and on unbalanced phonos, but not on jacks. The subwoofer's contribution to the volume is adjustable, and there are switchable filters to adjust the gain at 2kHz from +1dB to ‑2dB in 1dB steps. These affect the output feeds to the main speakers. Unusually, no maximum SPL level is quoted, so there's no indication of how loud the speakers can go: that's one judgement that has to be made by ear!

On their own, the Pro 5 Ribbon speakers have a very smooth sound. I found that they carry voices particularly well, and also put out more low end than you might expect from their size. However, I found the overall sound a little 'soft', which made it difficult to focus in on high‑frequency detail — and I felt they sounded best with the HF level turned up to its +2dB setting. The low end also tended to be a little boxy and unfocused, which is something the Pro 5 Ribbons have in common with many smaller ported monitors.

Of course, these comments have to be viewed in the context of the relatively low price and small physical size of the Pro 5 Ribbons, and they're certainly a lot more useful as monitors than most desktop multimedia speakers of this size.

Having said all this, I have to say that their tonal balance seemed to be pretty good — so as long as you also check your mixes for problems using headphones, they'd be fine for small studio applications at low‑to‑moderate listening levels. As I cranked them up, they got a touch boxy — which, again, was not unexpected — but for general music use when sitting up close to them, they're loud enough.

Adding the subwoofer with all the speaker volumes set to their 0dB level and the sub's filter adjusted to 80Hz, the low‑end contribution is vastly too high. In fact, I found I got the best result when turning up the subwoofer to a level where you only just realise it's doing anything, and that seems to be very close to its lowest setting (probably between ‑12 and ‑20dB!).

Once correctly adjusted, though, the low end sounds suitably deep and even, though still not particularly tight, which is possibly due to the porting being designed to prop up the bass end in such a small cabinet. In fact, the porting on the Pro 5 Ribbons may well contribute to their low‑end cloudiness, so when used with a subwoofer, stuffing some acoustic foam or a pair of socks into the ports could well improve matters.

Given their low cost, these speakers perform reasonably well and, importantly, are non‑fatiguing to listen to, albeit with a lack of focus when compared with more up‑market monitors. Once you add the subwoofer, the low-end extension is all you could want for use in domestic‑sized studios — but then that pushes the cost to a level where investing in a pair of larger full‑range speakers might be a better option. Used on their own, the Pro 5 Ribbons certainly outperform most desktop multimedia speakers, and they're well‑suited to those who have little space for their studio gear.

If you're after speakers with ribbon tweeters, the only low-cost alternatives I can think of are the cosmetically similar Samson Rubicons (5s and 8s). If you have a higher budget at your disposal, the Adam A5s would also be worth auditioning.

Prodipe are generally very good at balancing cost against quality, and though I may seem a bit lukewarm about these speakers, don't let that put you off trying them if space and cash are tight.