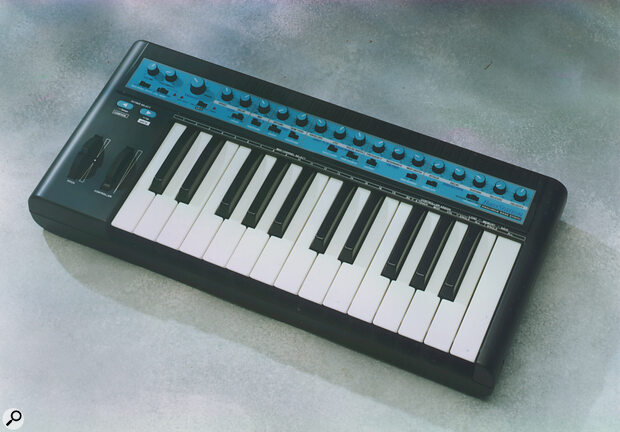 Given the scarcity and high prices of Roland's seriously trendy TB303 Bassline, the field has been wide open for enterprising manufacturers to fill the demand for a cheap and funky bass synth. Novation's BassStation is but the first of three contenders. We give you the low‑down...

Years ago, as a guest of Roland in Japan, myself and other assembled UK punditry were asked by Roland chief Kakehashi what products we would like to see in the future from the company. For myself, I asked for a bass synth, using samples of classic bass‑inclined synths but with full subtractive synthesis controls. A short‑scale keyboard, maybe, with strap holders. Cheap, but most definitely cheerful.

Well, here it is. Only it isn't made by Roland. The BassStation, though it's been a long time coming, is of course British, and made by Novation, the company that brought you the MM10 mini keyboard controller, which is designed around the shortcomings of Yamaha's clever little QY‑series Walkstations.

The BassStation looks very similar to the MM10; same size and shape, almost feather‑light, and functional to a fault. There is no screen, nor any need for one. Your first impression may well be 'blimey, is it going to last?' But the important bit — the keyboard — as on the MM10, provides a pleasant and authoritative play, and does not feel cheap.

Before getting stuck in, the reason the BassStation is so good, and the reason it will give the opposition (the Control Deep Bass 9 and the Synthology Clone 3) a run for their money, is that it has immediacy. Where Deep Bass 9 and Clone 3 are modules, the BassStation has a keyboard, and a pretty decent one at that, providing two octaves, transposable through eight octaves. Add to that the knobs and switches, which can change the sound from an acid flick to a subterranean growl in the swivelling of a baseball cap. Even after you've recorded your bassline, you can overdub some pitch‑bend or modulation in real time. And if you really want some fun, you'll be waggling some of the controls (namely Filter and Envelope) on an overdub too, whereupon such movements will be faithfully recorded and reproduced over MIDI.

More still? Yep, the BassStation will get you out of trouble if you're stuck for a regular polyphonic controller too. Plumb the thing into a module or waiting synth, and you have a funky little short‑scale keyboard to practice on, try out sounds, or whatever. This is a very, and I do mean very, useful little box. And in time‑honoured reviewer bullshit style, Novation isn't getting this one back.

This is such a fun synth that you almost feel guilty having to dissect it section by section. To dispense with the physical first: while light to the point of alarm, the BassStation's movable controls, knobs, switches, buttons and wheels are by no means as wonky as the casing would imply. At the rear of the instrument, you'll find a lone output jack, MIDI In and Out, 9vDC, the On/Off switch, and a mysterious Ext. Cont. connector, which reveals itself to be for an optional (and future) hand grip device.

Getting around the instrument on a day‑to‑day basis is foolproof for anyone vaguely familiar with analogue synthesis. The only time I felt that something could have been bettered was when operating the Osc 2 pitch range in semitones. This control knob is free‑flowing, and not, as was probably more common in the old days (for obvious reasons) click‑stopped at each semitone interval. The short‑scale keyboard doesn't worry me at all. Firstly, how much room do you need on the average bass part? And secondly, you can sneak up and down the octaves unbelievably quickly via the oblong Octave Select buttons.

As to what lurks beneath the surface, I am not one of those reviewers who feels that whipping off the back, in order to tell you who made the capacitors and the name of the Singaporean sweat shop that inserted the ruddy things, can have much bearing on your ability to enjoy the product. Suffice to say that this is a dual‑oscillator instrument, laid out along standard analogue subtractive synthesis lines. Each oscillator offers a choice of sawtooth or variable pulse (from narrow to square) waveforms, and Oscillator 2 is capable of being pitched independently through a 16' to 2' octave range, augmented by the coarse, one‑octave Semitone pitch control, plus the fine Detune. Thus it would be possible to create a harmony within a sound (with thirds, fourths, sevenths if you've had a few, I guess), or you can simply offset the tuning slightly for thickening purposes. Or, by snapping Oscillator 2 up to say, 2', you can produce a whole range of octave‑doubled synth patches that are neither bass nor lead — nice for gated effects. 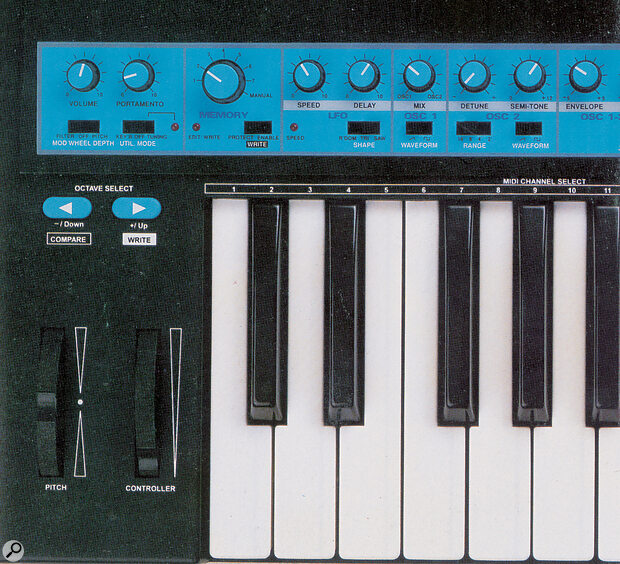 The waveforms themselves — powered, technically, by digitally‑controlled analogue oscillators — clearly have power, though players weaned on S+S (Sample and Synthesis) instruments may wonder how on earth you can produce anything approaching a range of sounds using these (ultimately not dissimilar) starting points. The sawtooth wave may be digitally controlled, but it is not a digitised waveform. You will encounter true grit here, and Amen to that. The pulse shape is variable for both oscillators and, though clearly a classic hollow square shape at one end of the spectrum, it never gets thin and nasal enough at the other, to my ears (as required, for example, for a real Clavi sort of bass tone). A quick call to Novation with this observation revealed that indeed this is currently being tweaked, and the resulting increased 'sharpness' potential will therefore be available shortly.

You can alter the pulse width manually, or have it modulated by the LFO, or the second envelope generator. For reasons perhaps only an analyst could fill me in on, PWM (Pulse Width Modulation) is the section of any analogue where I personally seem to get perennially lost... yep, there it goes again. Where's that damn sound got to? Why is the instrument now lurching along drunkenly when all I want is modulation of the pulse width, not the fundemental pitch? All is rarely lost for long here, be advised, and the tone of the manual is kindly and informative.

From the above sentence, you will gather that pitch modulation is clearly on the cards. You can set up a rise to, or fall from, the fundamental by moving the envelope control to the left or right of centre. The speed and shape of the pitch envelope is governed by how you set up the envelope generator. As I write I have, in fact, just programmed an extremely yummy sound where Oscillator 1 bends up to pitch from a semitone below, while Oscillator 2 remains rooted to the spot. This gives wonderful interest to the front end of each note.

March On Your Filter

As an army marches on its stomach, so a synthesizer marches on its filter — it's what gives an instrument character, definition, power, and range. Mindful of the current (silly, in my opinion, but there we are) fixation with Roland's ancient TB303 Bassline, Novation have not only provided a two‑position filter, 12dB per octave and 24dB per octave, but have also configured the 12dB setting so as to recreate the range of options available on a TB303 here on the BassStation through software. In other words, when you are in 12dB mode, the three filter controls of frequency, resonance and mod depth behave very much as the equivalent parameters do on said TB303. Namely? There is no negative modulation option (though there is when you are in 24dB mode); when the resonance is 'off' you still get a chink of res showing through; the range of movement is quite broad, for a high 'tweakability' factor.

It is years since I (glowingly, I'm relieved to say — I checked my yellowing stock of Sounds back issues!) reviewed the TB303 or indeed have played one, but the tonal range would seem to be highly accurate. More up my strasse is the 24dB position, where you'll get the fierce, sharp, seemingly slightly overdriven filter effects. The filter can glide into self‑oscillation and can be modulated by the LFO, or EG2.

The envelope generators themselves conform to standard ADSR parameters plus velocity, and, although you only have one set of physical controls, a quick switch flip from ENV 1 to 2 lets you shoehorn the overall sound — or just the filter shape, say — extremely quickly and easily. The velocity parameter controls the strength of the EG, dependent on how hard you strike the keys. Simple and effective. The attack is certainly fast (quoted as 1ms) without winning any awards, and can, at its slowest, appear to delay the start of a note by up to 10 seconds. Decay operates from 3ms through 10 seconds, and release likewise.

Beneath the ADSR controls, there is a multi‑position switch governing triggering modes: Autoglide (mimicking 'Slide' on a TB303) whereby moving from one note to a second while keeping the first held down will only affect the pitch, and not re‑trigger the envelope cycle; Single, when the envelope is set in motion only by the first note played; and Multi, where the envelope is re‑triggered with each note played.

As far as effects go — and by these I mean effects as were offered years before the DSP boys rode into town — Portamento, which is a smooth gliding effect between two played notes, can be added progressively, though even at its slowest, it occupies no more than one and a half seconds (though the manual claims five seconds), which will not be sufficient for the more majestic divebomb bass effect. Perhaps this too can be tweaked in time.

In terms of MIDI, the BassStation, like Novation's MM10 before it, insists you footle around with actual keys on the keyboard for things like channel changing, controller assignment and loading/saving patches. The only possibly tricky thing initially is that the BassStation views itself as a sort of independent controller and sound module, so you must have the TX and RX channel matched in order to play sounds directly from the keyboard.

There are seven memories in which to store sounds internally. This is an excellent facility, even though it's a fair bet they'll be altered within seconds. Briefly, out of the box, the presets encompass a farty, sharp attack with quick release filter, a round 'wow' tone with pleasing velocity sensitivity level, a sort of clangy, ring mod tone, plus a couple of growling sounds, one with heavy portamento. The final preset is pitched in the lead instrument register. Indeed, the BassStation can be used perfectly adequately as a lead‑line synth, the only restriction here being keyboard length.

Over MIDI, the BassStation has proved a model of simplicity and flexibility. Parameter changes in the filter and envelope department are transmitted as controller information, and this facility alone — being able to tweak sounds on the fly and have such changes recorded — makes the instrument worth its asking price, in my opinion. Though it's not mentioned in the manual, you can also perform similar feats with the Octave button, producing crazy octave leaps up and down, which again works well when you are initiating gate effects. Of the left‑hand wheels, the spring‑loaded one defaults to pitch (assignable in amount), while the second, free‑flowing, is assignable to modulation, aftertouch, or volume. You can also switch between filter and pitch modulation.

(NB: refers to the BassStation as a monophonic sound source.)

The BassStation is capable of producing current TB303‑style bass sounds as well more timeless bass and synth tones, with the added benefit of MIDI and polyphonic keyboard. Tremendous fun and an almost unqualified bargain.