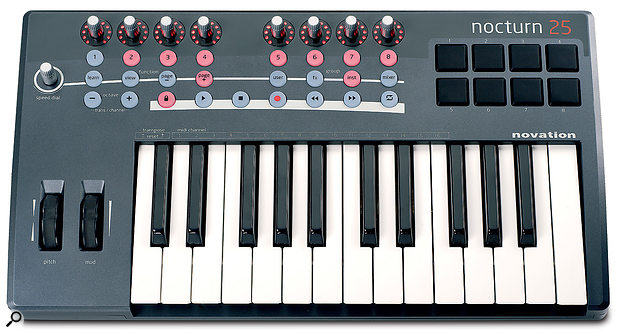 After an extensive programme of selective breeding Novation have created the Nocturn 25 — an affordable and touch‑sensitive controller keyboard.

The Nocturn 25 is a new MIDI controller combining a velocity‑ and aftertouch‑sensitive 25‑note Fatar keyboard with a set of buttons and knobs for controlling soft synths and plug-ins. Conventional pitch and mod wheels, and eight velocity‑sensitive rubber pads for programming drums or triggering samples, complete the facilities line-up.

The illuminated buttons and touch‑sensitive knobs were first seen on Novation's original Nocturn controller (reviewed back in the August 2008 issue of SOS) and facilitate easy hands-on control of software parameters. A 49‑note keyboard version is also available. The hardware is powered via USB connection with a computer, and can't operate stand‑alone as it has no MIDI sockets of its own — the only other sockets are for optional volume and expression pedals.

As with other Novation controllers, the Nocturn will operate both as a generic MIDI device and in conjunction with the company's nifty Automap software control system. Automap is able to automatically extract all the controllable parameters in a plug-in and map them to an appropriate hardware control, saving the user the tedious process of having to individually assign them. Bi-directional communication via the USB link then keeps the screen and controller in sync, so parameters adjusted at either end are always correctly displayed.

In generic MIDI mode (not using Automap), all the hardware controls have fixed preset MIDI‑message assignments, so you can only change MIDI channel and transpose the keyboard into different registers. Bank Select and Program Change messages are both dealt with from the Speed Dial data entry knob, by virtue of its internal push‑switch. Speed Dial also allows you to control any on-screen parameter, without having it assigned — whatever your mouse cursor is pointing at, Speed Dial will affect until you release the control.

Generic MIDI mode is somewhat limited in comparison, but fortunately the preset MIDI control assignments are pretty sensible: the most important and frequently used MIDI Continuous Controllers, 7, 10, 71‑74, and 91‑92 are on the rotaries, and 51‑58 on the buttons. Some may find it tedious to have CC11 (Expression) available only from an optional expression pedal, and the drum pads' non‑consecutive GM‑standard note assignments might also feel odd.

Most users are, in reality, probably going to want to use the Automap functionality. This relies on an included Automap Server application running in tandem with your sequencer software of choice, but the list of application support is pretty good, including all the main contenders (Cubase/Nuendo, Live, Logic, Pro Tools, Reason/Record, Sonar), as well as less established names such as FL Studio, Reaper and Tracktion. Not only does Automap allow you to completely reassign MIDI Note and Continuous Controller messages across the hardware controls, but it also holds the key to using the Nocturn 25 as a control surface for a variety of sequencer‑specific controls such as mixer sends and plug‑in parameters. We dealt with the inner workings of Automap in some detail in the original Nocturn review, however, so I won't recap all of that here. Instead, let's concentrate instead on how this particular bag of hardware bits responds in practice.

The rear panel features just an on/off switch, a USB port and sockets for optional volume and expression pedals.

The rotary controllers offer a nice, smooth, un‑detented action with just a slight resistance, in contrast to the Speed Dial's stiffer detented action. The backlit rubber buttons are well spaced, of a good size, and respond pretty reliably, giving a slight click to let you know they've engaged. Dedicated Learn, View, Page and Group buttons control these frequently used Automap functions, while octave shift buttons are always on call, also serving to switch the keyboard's MIDI channel and transposition settings. The transport control buttons can actually be assigned to any function you like, but there's also a dedicated button to lock them to transport duties if you'd prefer.

I can't say that the keyboard action exactly thrilled me, but by the same token it's no worse than I've experienced on many other small controller keyboards at the lower end of the market. The pads felt quite unforgiving, too, so that the tactile difference between hitting and missing the pad wasn't dramatic. Still, the black pads stand out a mile visually from the, er, black chassis...

Using the rotary controls and buttons with Automap was almost as much of a pleasure with the Nocturn 25 as it was with the Remote 61SL MkII I reviewed back in the June 2009 edition of SOS, although I have to say I did miss having the LCD read‑out provided on the company's more expensive Remote SL Mk II series — my memory isn't what it used to be, and even the most translucent incarnation of the Automap Heads Up Display window still has an impact on the screen area to some extent. Some welcome streamlining of the Automap experience has also occurred with regard to setting control ranges, and if you chuck another 20 quid30 dollars Novation's way for the Pro version you can (amongst other operational improvements) assign ASCII keyboard shortcuts to buttons and pads too, which is a cool thing.

Cubase's VST3 plug‑ins and built‑in channel EQ still don't seem to be accessible from Automap, which is a bit annoying if you don't have access to much in the way of third‑party plug‑ins, but developments from Apple and Propellerhead Software mean that the built‑in plug‑ins within Logic and Reason/Record have now recently moved within reach.

Overall, the Nocturn 25 is a sensible entry‑level addition to the Novation keyboard range, offering everything from very simple preset generic MIDI control through to fully assignable software‑specific parameter mapping, for not very much money at all.

If you like Automap, but the Nocturn 25 doesn't quite match your hardware needs, then you might want to check out the original keyboardless Nocturn or the more fully‑featured, LCD‑sporting Remote 25SL MkII.

M‑Audio's Hypercontrol is the closest to competing with the Nocturn 25's Automap functionality, although if you've read my review in the November 2009 edition of SOS, you'll be aware that I don't think it's a serious alternative yet, and besides, the cheapest model it comes with, the Axiom Pro 25, is significantly pricier.

Combining a good selection of different hardware controls with the flexible Automap control assignment system, this new unit offers great value for money and deserves to do well.