Despite the title, this isn't the debut CD of a Cumbrian '60s tribute band. It is, in fact, another of Soniccouture's increasingly frequent excursions into the weird and wonderful world of exotic tuned percussion. The back story is fascinating: back in the 18th century it was noted that the local stones of Skiddaw in the Lake District sounded particularly resonant when struck, spurring amateur musician James Richardson to collect enough of them to produce a fully chromatic, multi‑octave xylophone‑style instrument, which he and his three sons learned to play. In 1840 the Richardsons set off on a 'Musical Stones' tour which almost rivalled those of Jagger, Richards and company in popularity: in fact, the concerts proved so successful that the men didn't return home for three years — a situation many 'rock wives' (sorry) will be familiar with. 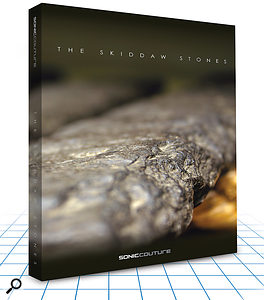 Headlined 'Monstre Rock Band', an 1846 newspaper concert ad states that the sound of the instrument ranges from the "alleged warble of a lark” to the "deep bass of a funeral bell”. I heard no birds or bells while playing the samples, but what struck me was the unmistakable (once you've heard it it) sound of a lithophone, hard and chippy on the surface while retaining a pure, melodious fundamental tone like that of a marimba. Though displaying a somewhat primitive ethnic flavour, the sound is musical and far from unsophisticated.

Soniccouture hired local musician Chris Stones (!) to play the stones with wooden and rubber mallets. Five octaves were chromatically sampled at up to 12 velocities per note (an unusually high number for a tuned percussion instrument) and multiple 'round robin' alternations, generating nearly 5000 samples that occupy 2.5GB. The wooden hits are bright and clangorous, reminiscent of the sound of a Balinese gamelan metallophone, and just as effective for strident rhythm patterns and lead lines. Rubber mallets give a softer peal, like a cross between a ceramic wind chime and a bass marimba, and their low velocities are ideal for rippling rhythm patterns and ostinatos.

Taking advantage of the pre‑industrial, rough‑hewn surface of the stones, a set of slithery, scraped performances have a strangely liquid, undulating effect, which, when played chordally, can create some great soundscapes. As usual, Soniccouture provide an entertaining Kontakt 'jammer' script, which creates automatic, random single‑note arpeggiaic rhythm patterns. Users can control the note and octave range of the arpeggios as well as their speed and note value. Ableton Live and Logic EXS24 versions are also included, the former with its own arpeggiator.

Limited access to this priceless historic instrument prevented Soniccouture from sampling a greater range of performances, making it slightly less versatile than a lot of the sampled percussion on the market. But in terms of its playability, musicality, depth of sampling, programming and unique, one‑off sound, it's a five‑star product. Dave Stewart