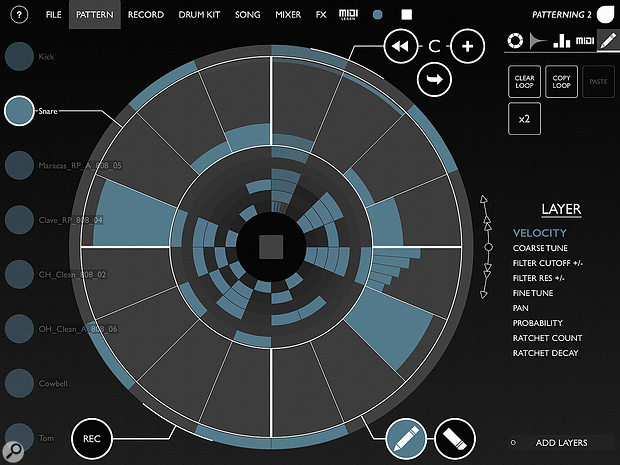 While iOS‑based music making has a relatively short history, there are already a number of apps that have obtained a ‘classic’ status. The original release of Olympia Noise Co’s Patterning drum machine was undoubtedly one of those and Paul Nagle gave it a glowing review back in the SOS November 2015 issue. As Paul described, Patterning can serve as a conventional, sample‑based drum machine, with pattern creation, song construction, drum kit creation, a solid suite of effects, mixing and well‑implemented MIDI support. However, its distinct circular visuals for the pattern editing grid, while making for a cool viewing experience, are actually an essential element of the design as Patterning allows you to use different step lengths within a pattern for each of the eight sound slots. And this, alongside the options to auto‑rotate the pattern for any (or all) of the sounds during playback, makes Patterning a polyrhythmic monster; it is unlike any other iOS drum machine and the words ‘unique’, ‘creative’ and ‘fun’ all apply.

So how do you improve upon what is already one of the best iOS drum machine apps? Well, Olympia Noise Co are giving it a go with the release of Patterning 2. Some minor cosmetic restyling aside, the main visual elements of the UI remain familiar and this will undoubtedly be welcomed by the existing user base. However, tucked around the UI, and under the hood, are a considerable number of refinements and new features. For example, a new Record tab has been added within the list at the top of the display. This is home to the new drum pads that can be used to create pattern data ‘live’. This works well, and you can control individual note velocity based upon the vertical position of your taps on the pad. The recording process is also incremental, so you can add additional hits to the current pattern with each cycle through the loop.

Other highlights amongst the many new features include the ability to switch between different drum kits on a per‑pattern basis. This is very cool and, whether you switch between a completely different drum kit, or simply between tweaked versions of the same basic kit, it opens up plenty of musically useful options. As before, there are lots of additional Patterning drum kits available for download via the cloud.

New automation layers are also available for your patterns. These include additional randomisation options over and above what was possible with the existing Probability layer. Particularly useful is the option to randomise velocity or the filter settings on a per‑step basis. The new Ratcheting feature (which allows you to create stutter‑like rhythmic elements by dividing a single hit into a number of rapid repeat hits) also has automation layers available for the Ratchet count (number of repeats) and Ratchet decay (the hits get louder or softer). Again, this is another creative rhythmic element to explore.

What else? Well, too much to mention in a review of this length, but new MIDI features have been added, Ableton Link start/stop is now included, and some under‑the‑hood optimisation has taken place. However, what has not been added is AU support and, given just how widely AU is now becoming embraced within iOS, some might find this surprising. IAA and Audiobus support still work smoothly, but it would be great to see AU support added at some point. That said, Patterning 2 has simply made a brilliant app even better and, if a single app might be a reason to buy an iPad, this is an app in that class. Indeed, it is so good I would happily pay considerably more than the modest App Store price to see Patterning 2 working on my desktop system.