This tasteful library is the flagship of the Organic Samples range, created by young composer Maxime Luft in conjunction with the Orchestral Tools samplemeisters. Tableau Solo Strings (60GB) consists of violin, viola and cello solo instruments recorded at the Teldex Scoring Stage, Berlin, from five mic positions. The same hall and miking scheme are used in Orchestral Tools' other collections, so these solo strings should fit nicely into the family. The instruments may be bought separately, or together as a discounted bundle. 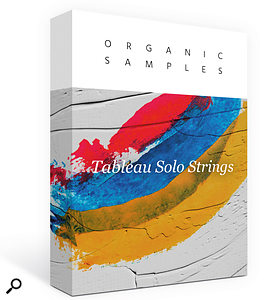 The violin samples were performed by Farida Rustamova on a 1745 Guarneri instrument. Despite its antiquity, the old fiddle sounds full of life. Its rich, vibrant, singing tone is ideally suited to melodic playing, and its swooping portamento slides are a joy. Long notes are played in a variety of attacks, with and without vibrato. You can't crossfade between the two, which is a pity. While the player's strong, expressive vibrato style is great for stirring romantic lead lines and dramatic themes, I found it a touch overbearing for simple folk melodies.

This solo cello's liquid-sounding legatos and soaring portamentos are a pleasure to play, and its reflective, noble tone is a great melodic resource. Cellist Vasily Bystroff also turns in some brilliant, biting and visceral short notes; when he digs into his louder spiccato deliveries, you can almost see the rosin flying off the bow. In an unusual twist, the cello's trills and tremolos start slowly and gather pace, adding a mobile expressive element to standard articulations.

My 'best in show' award goes to the viola. Played by Alejandro Regueira, this superb instrument's short spiccatos range from light, insistent brushes to a furiously emphatic bowing, a great articulation for driving ostinatos. The viola's dark, mellow tone also works a treat for stately heroic themes and slow-moving ballads; its legatos are less adaptable to fast playing, but if you're prepared to massage your MIDI notes after the event, they can produce good melodic results. On the downside, the note attacks of the non-vibrato articulations are generally slower than those of the vibrato samples, which can be a problem when combining both in a melody.

All instruments utilise a superior VSL-style legato mode, and play sustains, marcatos, pizzicatos, tremolos, semitone trills and four types of mordent grace note. These solo strings are beautifully recorded and played with great commitment, and the samples successfully capture the personality of each player.

On a technical note, the library runs on Orchestral Tools' free Sine Player, which connects to the company's online store and allows you to download instruments and mic positions, rather than waiting for the whole shooting match to trickle down the wire. It's a great innovation which allows buyers to get straight to work with these classy samples.