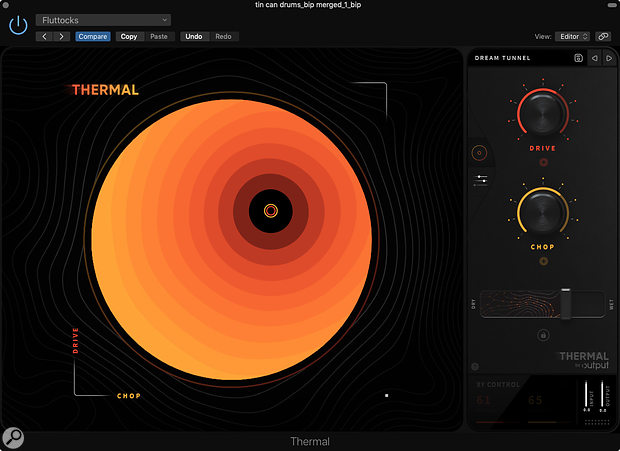 From subtle warmth to full-on modulated mayhem, this plug‑in covers a lot of ground.

Output are one of the most adventurous and free-thinking plug‑in designers around at the moment. You certainly couldn't accuse them of relying on digital emulations of rusting tin boxes full of valves and that smell of toasted Bakelite!

Their latest creation, Thermal, follows a similar paradigm to their Portal granular processor, which was one of my picks as Gear Of The Year in 2019. But this plug‑in's central purpose is distortion. Just like Portal, there are sophisticated modulation options, additional effects and an X‑Y controller, for adjusting parameters assigned to macros. Available for Mac and Windows, it supports the usual AU, VST2/3 and AAX formats, and can be installed on up to four machines.

There are plenty of presets, all arranged by the type of sound they're intended to process, and you can just load one and then fiddle with the X‑Y pad to get an idea of how things work. But if you stick to the presets, you'll miss out!

Thermal starts by splitting the signal using a three-way filter section. Though it looks like one, this is not a crossover filter, but rather three parallel signal paths, each with its own high- and low-pass filters to restrict the frequency range. The frequency ranges can overlap as much as you like, and can be dragged up/down in level. Each of the three parallel paths, called a Stage, starts with a choice of 19 different analogue and digital distortion types. Post-distortion, each Stage has a choice of nine more conventional effects. Once the three signals are recombined, there are two further effects engines, each of which can again be loaded with any of the nine effect types. The two master effects sections are arranged in series, and are followed by high- and low-pass filtering, a master compressor and a wet/dry mix slider.

Fire up Thermal and you're greeted by a large orange X‑Y pad with animated graphics, two macro control knobs, the wet/dry slider and the patch browser. The pad put me in mind of an alien eyeball, floating in a pool of orange lava, but the graphic changes according to settings within the patch.

Click on the little 'controls' icon, and the window changes to reveal the inner workings of the plug‑in. This view is arranged in sections, with the three-channel filter at the top, and below this are sections for the Stage Processing Controls (one tab for each Stage), the two modulation generators, the X‑Y pad, effects and master section. The Macro controls are in the panel to the right, and clicking on the orange circle above the faders icon takes you back to the simplified plug‑in view.

Each section has an On/bypass switch and a solo function, and most controls can be linked to a macro. You set this up by dragging the '+' assignment indicator adjacent to each macro knob onto the control you want to include. Do this, and a coloured circle matching the colour of the macro knob will appear next to the control. Dragging up and down on this little circle sets the control range, as indicated by a coloured line segment around the knob in question.

Each Stage can be treated with its own distortion type, one effect type (bit reducer, chorus, compressor, stereo delay, filter, flanger, frequency shifter, phaser and reverb), plus stereo width (based on M‑S processing) and Tone controls, which work independently of any other filtering in the Stage. There's also a Refilter tickbox, which is used to filter out unwanted harmonics. 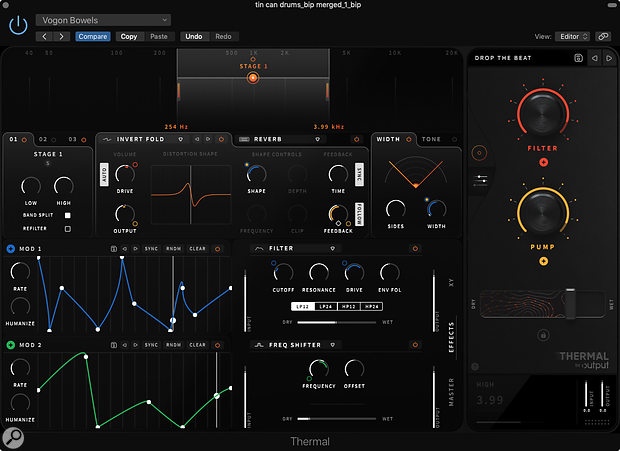 The signal path is split into three at the outset and each 'Stage' can be filtered, distorted, effected and modulated to your heart's desire before being recombined and mangled again!

The distortion section takes the name of the distortion type currently assigned to it, and is where you choose and adjust the distortion type for the selected Stage. A dynamic display shows the distortion shape along with the result of any modulations, and the effect can be adjusted using the Drive, Output, Shape, Frequency, Depth and Clip Controls. Controls that aren't relevant to the current distortion type are helpfully greyed out. Some of the options seem to behave as phase distortions, adding harmonics by changing the shape of the wave, rather than the more conventional approach of clipping or applying soft saturation. Others use digital fold-over, bit reduction, or analogue-style saturation. So, taken as a whole, the options cover a lot of ground but there's further complexity if you want it: the distortion panel has a feedback section, with adjustable delay time and feedback amount.

It's possible to coax some beautiful effects out of Thermal, with treatments ranging from the fairly subtle to the very assertive.

The two global modulation sections allow just about any parameter to be modulated, and this is where the rhythmic fun really starts. Here, you can draw in complex modulation shapes by clicking and dragging to add and move points. It's possible to create complex patterns or smooth curves and ramps. Or you can load preset patterns and basic waveforms. These modulators can be tempo sync'ed or left free-running, and there's a randomise option if you need some creative inspiration. An adjustable Humanize function applies some random variation to the modulation envelope.

Creative use of this section allows complex rhythmic effects to be set up as the '+' symbol can be dragged to other parameter controls to modulate them by any desired amount. Virtually all of Thermal's controls can be modulated in this way. Both Bipolar and Unipolar modulation characteristics are supported and favourite envelope shapes can be saved for future use. 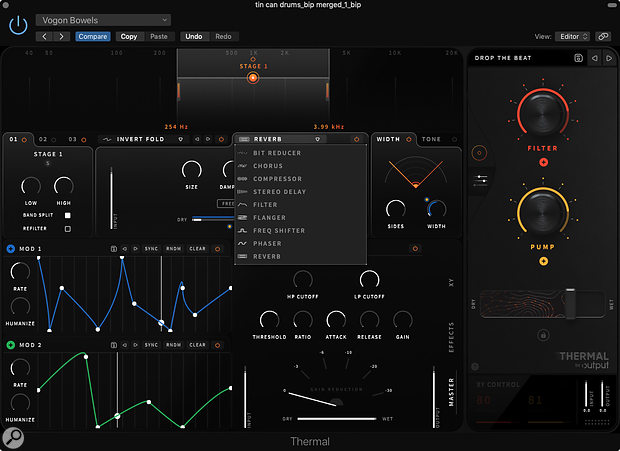 The range of effects on offer via the drop-down menu.

Once you have a grasp of the signal flow, working with Thermal is surprisingly intuitive, despite its apparent complexity, and the Stage solo function can make editing settings much easier. The two modulators are the key to adding movement to the effects, and a faint visual grid makes it easy to create precise rhythms. Grab a point to move it or grab a line part way along to bend it. Adding a rhythmic modulation to the Drive control of one or more Stages picks out the beat with timbral changes, and this can be further emphasised by using the resonant filter in one of the effects slots and modulating its cutoff frequency. Simple strategies such as these can turn a pad or drone into a useful rhythmic element, but a drum loop can be made to sound more electronic, fatter, edgier or gritty and aggressive.

So, do you need Thermal? For anyone with the slightest affinity for experimentation, it is a dream playground. It's possible to coax some beautiful effects out of Thermal, with treatments ranging from the fairly subtle to the very assertive. Pads can become rhythms, simple drums can become complex, harsh sounds. Warm and polite sounds can be made to pop out of the mix.

At one extreme, Thermal can add a new dimension to EDM productions. But it can also sound deliciously smooth in chillout, ambient or cinematic compositions. If you're a singer-songwriter with just a vocal and piano or acoustic guitar, you'll get through life without it. But, even then, some of the gentler treatments are great for warming vocals or instruments unobtrusively. Even in mainstream pop Thermal can finesse drum parts and loops, or create interesting backdrops from synth and guitar parts.

I've only really scratched the surface here: the possibilities are so numerous that I'm still unearthing new uses for Thermal. But already I love it.

A splendidly anarchic approach to distortion-based processing that could find applications in many musical genres, though it will be of particular appeal to the more experimental musician. I have already found numerous uses for Thermal on my current album project.