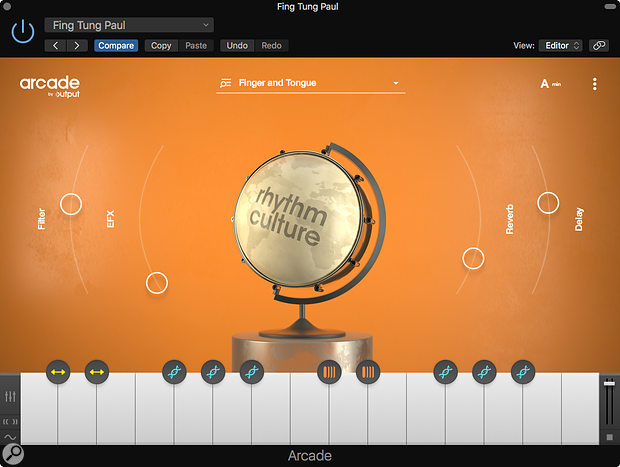 You can make changes to loops on the fly with only four controls.

Output’s Arcade is a loop-based instrument that can draw upon an ever-expanding library of loop kits (organised as Product Lines) or the user’s own imported loops. What makes Arcade rather special is the way in which the user can interact with the loops to modify them in different ways so that everyone can produce their own unique variations. Output have decided to offer Arcade as a modestly-priced subscription instrument rather than as an outright sale as they plan to keep on adding Product Lines to keep things fresh. Rather than having to download all the content and clog up your hard drive, all the Product Lines reside in the cloud (accessed directly from within Arcade) and loops can be auditioned prior to downloading the ones you need. Once downloaded you can work off-line. The first 100 days of subscription is currently free and you can cancel at any time without losing access to loops you’ve already created within your DAW projects.

Each Kit within a Product Line comprises 15 related loops that can be sync’ed to your DAW tempo and which can be set to any musical key. Arcade’s browser allows loops to be searched by type and it is drag-and-drop simple to combine loops from different Product Lines (or to bring in your own loops) to create custom kits. Two octaves of your MIDI keyboard are used to trigger the loops using the white notes; the back notes control the modifiers that change the way the loops play back. 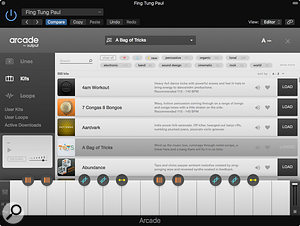 View the available loop kits and download only those you need.There are three kinds of modifier, denoted by their icons: Resequence, Playhead and Repeater. Changing the play order assigned to a Resequence key is simply a matter of changing the segment numbers in a sequencer-like grid. Repeater may be controlled by a four-step sequencer where you can select to reverse the audio, set the repeat rate as a function of tempo, change the playback speed or add a random element. Playhead sets a start and end point, looping mode, speed and forward or reverse playback. There’s also a switchable Jump to Cue Point option.

In addition to MIDI data, the GUI keyboard may also be used to audition sounds. Selecting Loop edit at the bottom of a white key allows the start and end points of the loop to be changed, crossfading to be adjusted, playback to be reversed, pitch changed, speed changed, filters adjusted — plus there’s an Advanced edit tab where you can tweak the velocity sensitivity and formant, and see the original key and tempo of the loop with a ‘snap-to’ option of Transient or Grid. If bringing in your own loops, you’ll need to visit the Advanced section to set the original bpm and key of your loop so that it will follow the session key and tempo correctly.

The start and end points of the loops can be edited along with other parameters including filtering using the edit tab that appears at the and of the white keys in the GUI. However, if you don’t know the tempo of the loop you’ve imported, you’ll have to tweak the bpm figure until it all lines up as there’s no auto tempo-detection tool.

We’ve determined that the modifiers are the key to making your loops sound unique and that they can be used as presets or edited to allow segments of the loop to be changed for as long as the modifier key is active. But how does that all work out if you want to play polyphonic loops? The answer is that tools within the waveform display for each loop shown at the top of the modifier edit screen allow you to set up actions that relate specifically to that one loop. For example, in the Resequence edit window, there are numbered markers that can be moved around for each of the loops, so activating the modifier keys produces different re-ordering results for different loops. As you can select what is in effect a quantise grid for these actions, the transitions always sound musical and in time. Each kit loads up with useful default settings that already allow for a considerable degree of flexibility so you can start out in a very easy way and then dig deeper later. 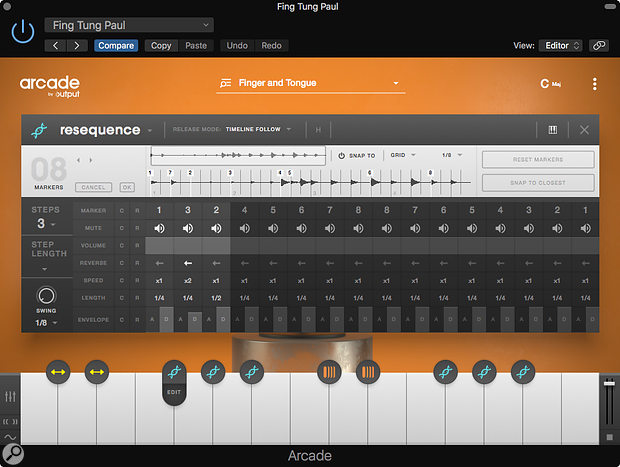 Resequence sets up the way the loop sections are to be rearranged when you press the modifier keys.

A simplified Macro control setup is also provided, custom designed for each kit, with four parameter faders that can be used to interact with the loops in real time. If you want to go deeper and set up your own, any parameter can be assigned to one of the sliders just by right-clicking on the parameter. The musical key is set at the top of the page and if you select the Lock icon, kits will be auditioned in the key of the song. Otherwise you’ll hear their original key.

Small icons at the bottom left of the GUI flip the view between Main, Mixer, Macros and Modulation. A simple level and pan mixer section enables loops to be combined and up to four of the 11 available effects added via two send sliders. Up to four more effects can be inserted into the master output. Each send can have two effects inserted. The effects cover the usual modulation, filtering, overdrive, delay and EQ options.

There are also comprehensive modulation capabilities that include an LFO and a step sequencer with a choice of step shapes. This can modulate any of Arcade’s parameters.

At the time of the review there were 15 Product Lines available ranging from drums and percussion to machine noise, toys, natural sounds and synths. A 16th Line called Warped was added just as I finished. There are also quick-start videos on the Output’s web site and YouTube that are very easy to follow — in no time I was creating new loops from old. Dragging in your own audio loops is simple as long as you fill in the tempo and key details under the Advanced tab, though I couldn’t find a way to directly import Apple Loops in a way that included their own metadata. However, if you go to your Apple Loops folder and simply drag in the audio files, Arcade seems perfectly happy once you’ve been back to your Apple Loops browser to make a note of the key and tempo.

Was there anything I didn’t like? To be honest, not much, as Arcade makes it so easy to add fresh variations to existing grooves and loops. OK, some of the buttons had grey rather than black text, which my brain interprets initially as greyed out and so not active, but that’s not a big deal. Some way of assigning a default tempo value to imported loops, actioned by dragging a marker from the loop start to the loop end, would be useful too.

I guess different people will use Arcade in different ways, but I found the simplest way to start was to set up a MIDI track to trigger one of the loops, then take a second pass and add the modifier notes where needed. These should also be quantised for the tidiest results. It is also possible, of course, to use half a bar of one loop followed by half a bar of another to ring the changes. This procedure can be repeated for different loops, or you can play them all at the same time if that feels more natural. I’m sure I’ll keep on discovering things as I continue to use the plug-in.

In all, Arcade offers an ingenious solution to creating and reshaping loops, all for no more than the cost of a couple of beers per month.

Some products overlap with what Arcade can do, but there is no direct equivalent. Accusonus Regroover and Spectrasonics Stylus RMX both allow changes to be made to existing grooves, but Arcade is very much its own thing.