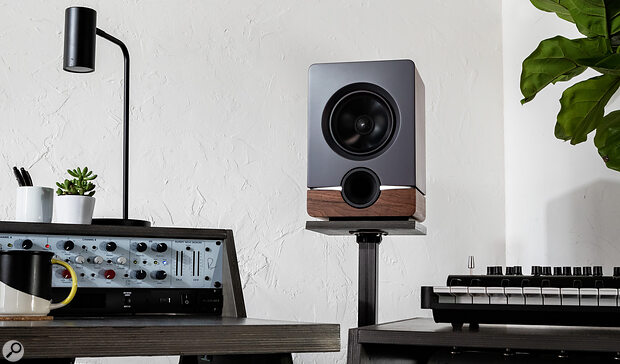 Output’s affordable new speakers were made with the help of one of the most prestigious brands in studio monitoring.

When I first glimpsed the prototype of these speakers at the 2020 NAMM show in January last year, they were very much an unexpected addition to the Output range, as the company’s line‑up otherwise consists of software and studio furniture. In designing these monitors, Output enlisted the help of Barefoot Sound, the US company behind a distinguished range of esoteric studio monitors. Essentially Barefoot looked after the speaker design while Output contributed the cosmetics. The resulting design was then put to manufacture in the Far East, a move that enabled Output to bring these monitors to market at a very competitive price.

The monitors are two‑way active speakers built around a 6.5‑inch time‑aligned, dual‑concentric driver, newly developed for the Frontier with the aim of maintaining phase coherence across a wide range of listening angles in both the horizontal and vertical planes. Its woofer and tweeter diaphragms are made of an aluminium alloy with a very high stiffness‑to‑weight ratio, and we’re told that the diaphragms maintain a near‑perfect excursion behaviour throughout their pass bands. The high force‑factor motors incorporate copper and aluminium shorting rings to minimise distortion and thermal compression. 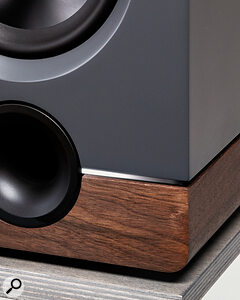 The electro‑acoustic design was handled by Barefoot, while Output contributed the aesthetics.The visually distinctive cabinet is front ported and measures 332 x 230 x 200 mm, weighting in at 7kg. It feels very solidly built and sounds quite dead when tapped, as a good enclosure should. It is also worth commenting on the somewhat luxurious packaging that includes soft fabric bags and sleeves to protect the speakers.

On powering up the speakers, a line of white light is emitted from a narrow slot between the hand‑crafted walnut base and the top half of the cabinet, which has a smooth, grey finish. A moulded port flare straddles the two cabinet sections and is located centrally. Power comes from a pair of 100W Class‑D amplifiers, with the active crossover operating at 3kHz.

Turning to the rear of the speaker, we find an IEC mains inlet with nearby power switch and a choice of inputs: unbalanced phono, or a balanced jack/XLR ‘combi’ socket. There’s also an Eco switch that puts the speakers to sleep when no audio has been detected for a while, in which mode the power consumption drops to 280mW (the speakers wake again when audio is detected). A rotary switch allows for input gain adjustment in steps, a strategy that allows for accurate gain matching between the speakers. There are no EQ controls for optimising the speakers to specific rooms or locations, and this is again down to a Barefoot philosophy: they aim in all their speaker designs for a flat response as measured in an anechoic chamber.

Speaking of frequency responses, a detailed plot was provided with the review pair, and this confirmed the Frontier’s nominal specs of 45Hz to 25kHz. Unlike many such plots, the one supplied was not excessively smoothed so some bumps and dips were present, though most of these were no more than a dB or so away from flat. The lows roll off fairly steeply below 45Hz and are around 12dB down at 30Hz. Similarly, the highs stay nominally flat until around 23kHz, after which the response starts to drop away, being around 12dB down at 26kHz. There was no maximum SPL figure in the spec sheet but, in practice, when used as nearfied monitors, I found there was no shortage of clean level. Apparently the lack of SPL specification is down to another Barefoot philosophy: they don’t publish SPL figures for any of their speakers, as they feel most of the methods of measurement used by the competition don’t conform to a single standard and can be misleading.

...what really matters is whether or not they will allow you to make informed mix decisions that translate well to the outside world. In this respect, I’d say Output’s monitors do a great job.

For test purposes I mounted the monitors on a pair of Primacoustic Recoil Stabilizers which, in turn, stood on my desk. For comparison purposes I used my Event Opals, which have a much drier and tighter bass end than any other ported two‑way speakers that I have tried to date. As expected, the low end of the Output monitors sounded similar to that of other ported designs in the same price bracket, insomuch as there’s a good sense of depth but without the super‑tight dryness of the Opals. Nevertheless, there was nothing to attract criticism. The mids and highs are presented very clearly and with a strong sense of focus, and the sound tallied quite well with what I heard from both my Opals and my AKG headphones.

The dual‑concentric design really maintains focus as you move off axis; there’s a stable centre image and a very well‑defined stereo soundstage. Inevitably all loudspeakers involve compromise, even those at the very high end of the market, but what really matters is whether or not they will allow you to make informed mix decisions that translate well to the outside world. In this respect, I’d say Output’s monitors do a great job. Monitors of this size are well suited to home studios and smaller production rooms, which account for a large part of the market, and while there’s no shortage of competition in this price range, the Frontiers give a very good account of themselves. They have all the benefits of a dual‑concentric design, and the fact that they look gorgeous doesn’t hurt either.

This is a crowded sector, but if you’re specifically after dual‑concentric monitors the options narrow down considerably. The APS Coax costs around the same as the Frontier, while the PreSonus Sceptre and Fluid FX speakers are more affordable. Genelec’s The One series use coaxial drivers, but are more complex and represent a big step up in price.

The Frontier is a very capable and stylish little monitor that offers all the benefits of a coaxial speaker design.