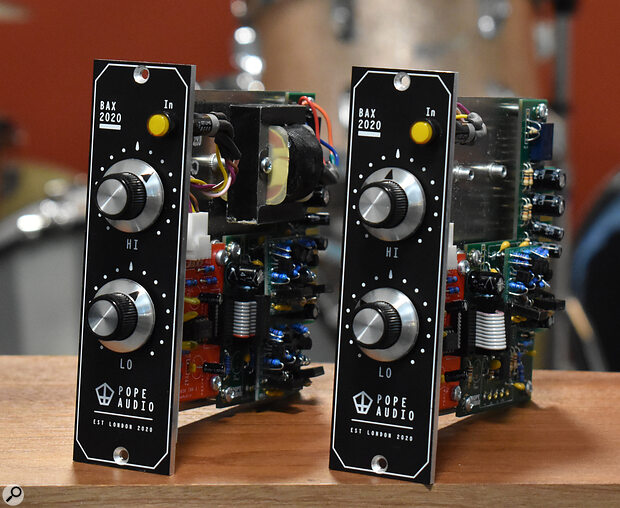 We test this stylish take on a classic EQ design.

At the heart of Pope Audio’s first release is the famous Baxandall ‘tone control’ circuit. While Peter Baxandall’s classic design has long been popular with hi‑fi manufacturers (if you’ve used a hi‑fi with ‘bass’ and ‘treble’ controls, it’s likely a Baxandall EQ) it has also found its way into several audio production devices, and with good reason. It’s a simple, but highly effective concept involving very broad shelving EQs, whose slopes rise and fall gently. This makes possible broad, sweeping changes to your audio that won’t introduce unpleasant phase distortion.

Not only does the new BAX2020 put this classic tone‑shaping EQ into a 500‑series module, but it also adds some ‘vintage’ character. In fact, Pope offer a few variations, each one featuring the same minimal Hi and Lo controls but differing from its stablemates when it comes to the output stage.

For review I was supplied with two pairs of modules: the Classic and Extra versions. The stylish but strikingly simple front panel hosts just the vintage‑looking Hi and Lo knobs and a small bypass switch, which, when engaged, bypasses all the circuitry. The input stage of both models utilises a handmade GAR2520 op‑amp, inspired by a mid‑’70s design that became an important contributor to the sound of the classic API consoles. The Extra model features an additional GAR2520 in the output stage, and this feeds into a custom‑made transformer based on the 2623‑1 transformer, again found in ’70s API consoles. Details of other off‑the‑shelf configurations, as well as options to pursue your personal tone quest by mixing and matching op‑amps, can be found on Pope Audio’s website.

Part of the beauty of this style of EQ is that it can be very forgiving when recording.

Over the review period, I used both pairs of BAX2020 on a variety of sources for tracking and mixing. For my first test mix, I patched in the Extras to use as a stereo mix‑bus EQ; I suspected that the broad Baxandall EQ would make it ideal for a ‘top‑down’ approach to mixing. Once I had a basic balance, I set the Hi control to around the two o’clock position and the Lo at one o’clock. As the mix progressed, I became impressed at how quickly things came together, and by that often‑elusive sense of brightness and presence that I could hear: things didn’t sound at all harsh or overcooked. Towards the end of that mix, I made a point of comparing the BAX2020 with plug‑ins I might use in a similar role and, while I was able to get quite close with one plug‑in in particular, I was left in no doubt that I preferrred to stick with the hardware.

On another project, I used the same pair on a drum bus and found them particularly good for shaping the low‑end — I got a real sense of this EQ’s character, which I assume is due to the saturation of the 2623‑1 transformer, and as I increased the low‑end boost this became increasingly audible.

Part of the beauty of this style of EQ is that it can be very forgiving when recording; if you slightly overdo things it’s easy enough to correct it when mixing, since you get none of the nasty resonances or distortion that some other designs can introduce. Adding just a touch of Hi lift and Lo cut worked very well indeed to tailor my vintage U87 to a female vocal, and I found similarly pleasant results on snare, kick and acoustic guitar.

Both review models worked superbly on a whole mix and while the difference between the Classic and Extra versions is subtle, it becomes more obvious on louder, bass‑heavy material. Indeed, the Extra would be an affordable means of adding subtle analogue mojo to an otherwise clean‑sounding chain. The BAX2020 is an impressive debut product from Pope Audio and is well worth auditioning.

A stylish and impressive take on a classic EQ circuit, with several op‑amp and transformer options to add a touch of character.

Prices start at £366 per module, including delivery.