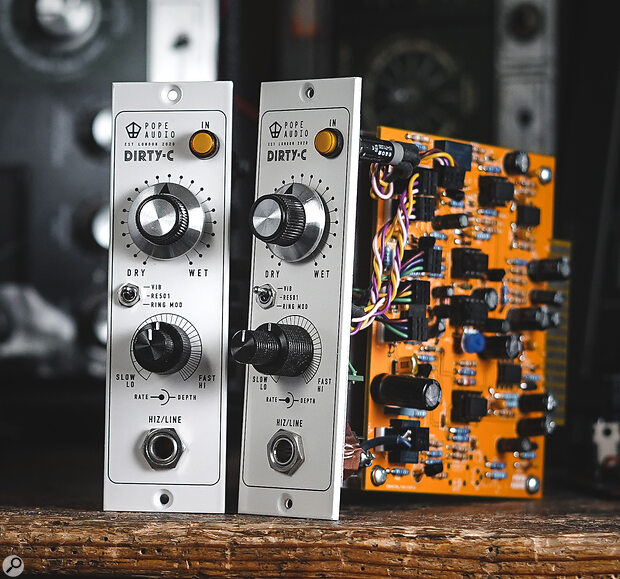 Based on the chorus section of Roland’s classic RE‑501, this isn’t your average 500‑series module!

Pope Audio’s debut product was a classy 500‑series Baxandall EQ — we reviewed it back in SOS February 2021 — and it proved to be a hit. How do you follow something like that up? Well, with his second design, the intriguingly named Dirty C chorus module, designer Adam Pope says that he suffered from the equivalent of ‘second album syndrome’. Now, a chorus effect might not seem like a very obvious choice — but it becomes rather less surprising when you learn of Adam’s background of working on classic tape echoes at some of London’s most well‑known service and repair centres...

After more than 20 years spent carefully servicing vintage Roland tape echoes, he felt that the chorus section on the later models (the RE‑501 and SRE‑555) was a feature that deserved wider appreciation. The price of vintage tape echoes and vintage chorus stompboxes has rocketed in recent years too, and the combination of price and demand has made development of high‑end recreations such as this more viable commercially. The Dirty C, then, is essentially Pope’s take on the chorus section of the Roland RE‑501 Chorus Echo, but he’s included some extra features and functionality too. As with all 500‑series modules you’ll need a chassis both to power it and to provide the analogue I/O.

The chorus section on the original RE‑501 had a rather limited control set, with just an Intensity control allowing users to change the modulation rate of the effect. The Dirty C does come with instructions on how best to recreate that RE‑501 effect faithfully, but it also offers a number of additional controls, whose purpose I’ll explain as I describe my experience of using the Dirty C on some projects in my studio.

The Dirty C contains the same analogue MN3007BBD chip used in Roland’s RE‑501.

The Dirty C offers three modes, and the RE‑501 setting seemed an obvious place to start. I experimented with this on a keyboard part I was recording and it provided a lovely chorus shimmer that sounded smooth and convincing. The Wet/Dry control allows you to balance the level of the effect with that of your original signal, whilst Depth allows you to adjust the amount of modulation. Lastly, we have a Rate control, with which you can fine‑tune the speed of the effect. To put that in distinctly unscientific but hopefully meaningful words, I’d describe this as allowing you to add more or less ‘boing’ to any parts that have a rhythmic element!

With the Dirty C switched to its Vib setting, the sound leans more towards a vibrato‑type effect, and as I’m someone who is addicted to all things vibrato I found myself using this setting a lot, particularly on electric guitars but on other sounds too (even on some backing vocals on one mix!). I found this to be a great way of adding a little excitement or of helpfully ‘blurring the lines’ on parts that felt a bit rough around the edges. The last mode is Ring Mod, which increases the modulation speed into the audio range. Using the Rate control you can create some very interesting, discordant‑sounding effects that perhaps veer more into the ‘fun’ camp than the ‘usable’ one, but I’m sure some people will find that it has its uses!

The unit features a true bypass switch, and a high‑impedance instrument jack on the front, which allows users to plug a guitar or keyboard straight in (the unit can be used as a direct input to your recording setup when not engaged, which is a nice touch). The Dirty C contains the same analogue MN‑3007 BBD chip used in Roland’s RE‑501, not to mention other popular vintage units including the Boss CE‑2 pedal (another device whose price has gone stratospheric in recent years!). As well as the chorus effect, some users like the inherent sound of running audio through these circuits and I found, when experimenting with plugging a bass guitar straight into the line input, that it definitely provided a certain vibe. The low end of the instrument seemed to be rounded off, and the sound had a slightly retro sheen, or ‘chuff’, for want of any better adjectives! Sometimes, a little noise and even crackle are audible when using this input, but this is an artefact that the designer says has been left in intentionally — it’s apparently one of the characteristics that users enjoy when running audio through this particular circuit.

The Dirty C is arguably the best‑sounding chorus that I’ve heard...

For The Love Of Chorus

The Dirty C is certainly a big departure following Pope Audio’s first release, and the one term I keep returning to as I search for words to describe my experience of using this module is ‘fun’. Chorus can be a somewhat polarising effect, in my experience — if you’re old enough to have been stuck in rehearsal rooms in the ’90s, when every bass player wanted to sound like they were in Nirvana, you might not enjoy it so much! But if you’re a fan, you’ll almost certainly be delighted to get your hands on this unit.

The Dirty C is arguably the best‑sounding chorus that I’ve heard; the effect always becomes a part of the sound rather than seeming to have been ‘stuck on’ to the source. The 500‑series format and array of controls combine to make it a flexible, studio‑friendly package that could justify the extra cost over, say, a boutique guitar pedal. It would also make a great companion if you have one of the earlier Roland tape echoes that lack the chorus section. The Dirty C may be rather a niche effect, but if it’s your niche — if you like having toys in your studio that allow you hands‑on experimentation outside of the box, and especially if you like chorus — it could be right up your street, and it’s well worth checking out.

Pope Audio’s second release is a reimagining of the chorus section of the classic RE‑501 Chorus Echo. There’s plenty to play with in this fun‑packed 500‑series module.