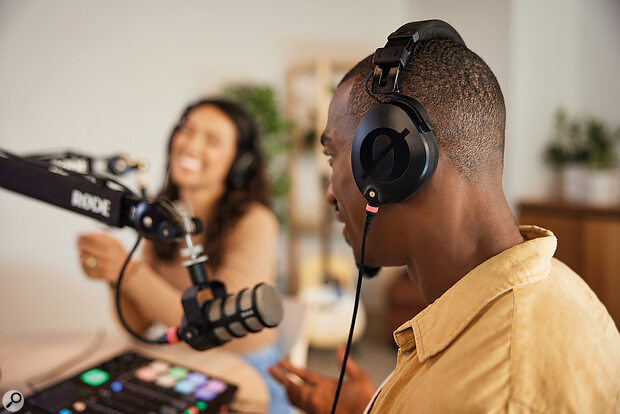 Let me start this review with the TL;DR version. Rode have launched some headphones. They sound very nice. And they’ve fixed things we didn’t even know were wrong with headphone design.

The first and second points are not exactly surprises. The headphone market is huge, headphones have a lot in common with microphones, and Rode are a mic company who invest a lot in R&D. So, you’d expect Rode headphones to (a) exist, and (b) sound good. What we didn’t see coming are Rode’s ergonomic innovations — some of which are so obvious in retrospect that other manufacturers will be slapping their foreheads and crying “Why on earth did we never think of that?”

The Cups Of Life

The NTH‑100s are passive headphones that turn electricity into sound waves in the traditional fashion, using 40mm moving‑coil drivers mounted in closed‑back earcups. They have a nominal impedance of 32Ω and a specified sensitivity of 110dB SPL per volt (RMS), meaning that they can easily be driven loud from modern low‑power, low‑impedance sources such as laptops, and they will accept up to 1700mW input power before 1% THD is reached at 1kHz.

Turn your eyes from the spec sheet to the earcups themselves, though, and you’ll start to see the fruits of Rode’s fresh thinking. First of all, there’s the asymmetrical, almost triangular earcup shape, which somewhat mirrors that of the human ear. Next, it may sound trivial, but many headphone models make it gratuitously difficult to tell which side is left and which is right. No danger of that here, thanks to the enormous letters printed on the inside of the earcups.

The CoolTech gel is designed to combat this by “absorbing and dissipating heat” and, blow me, it actually does.

Then there’s the design of the removable earpads. These are made of memory foam, which adapts to the shape of your head, moulds itself around glasses frames and, best of all, incorporates a special gel that Rode call CoolTech. Anyone who’s done long sessions on headphones will know that things can get pretty sweaty and unpleasant under there. The CoolTech gel is designed to combat this by “absorbing and dissipating heat” and, blow me, it actually does. I fully expected this to be a gimmick, but it really works, and it’s not subtle. So, although the NTH‑100s clamp fairly firmly to the head, they’re both more comfortable and less hot than many other pairs that don’t. 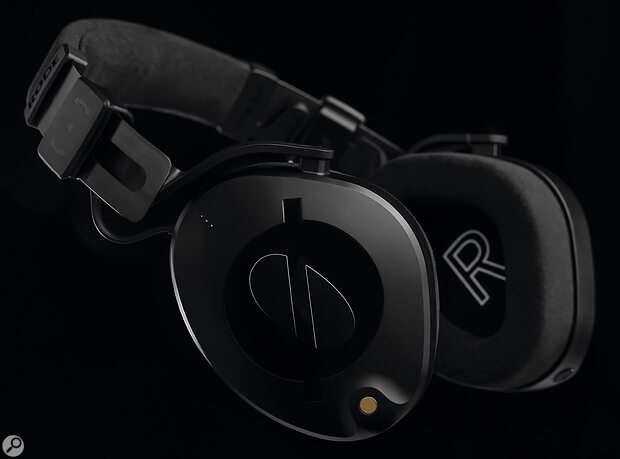 Among the NTH‑100s’ innovative design features are the use of CoolTech gel to stop your ears getting too hot, and lockable ‘arms’ to ensure a consistent fit.

The earcups are joined to the headphone frame by a short, rigid ‘arm’, with the connections at either end allowing some freedom of movement. As in many other designs, the earcups slide along the frame to accommodate different head sizes, but here again we find ergonomic innovation at work. Once you’ve positioned the earcups correctly, you can rotate two plastic clips through 90 degrees and lock them firmly into place. This not only saves having to go through the fitting process every time you put them on, as is often the case with other headphones, but means their position and therefore their sound is guaranteed to remain consistent throughout a session.

The NTH‑100s’ modular design is intended to make as many parts as possible field‑replaceable. That, naturally, means that the cable is detachable, and once more the Rode brains trust has been to work. Most headphone cables either attach only on the left, or to both earcups using a Y cable. The NTH‑100s, by contrast, have stereo cable ports on both earcups, so you can simply connect the single cable to whichever side is more convenient.

The supplied cable is 2.4m long, straight, and has TRS mini‑jacks at either end. And in one, final, inspired move, it comes with what Rode call COLORS ID: a set of coloured clips that snap onto the body of the jack connectors. They also offer spare cables, in 1.2 or 2.4 metre lengths, in a variety of bright hues. Never again need your session be held up while you try to fathom out which of those identical black headphone cables terminates in a drummer’s head.

All in all, Rode’s ergonomic improvements really make a positive difference to the experience of working on headphones. What’s more, they do so without any obvious drawbacks or compromises. My only reservation about the design of the NTH‑100s is that they don’t fold up, and although they come with a soft bag, there’s currently no proper carry case available. Rode are at pains to point out that the construction is extremely robust and has been heavily stress tested, but I’d want more protection if I was taking them on the road.

Having been so impressed by the inventive design of the NTH‑100s, I was actually quite nervous about listening to them for the first time. It would have been awful if Rode had put so much thought into the ergonomics while neglecting the actual sound!

Rode’s PR says that they tried to give the NTH‑100s a “sound signature akin to open‑backs, but with all the advantages of closed‑backs”. Chief among the latter is isolation, and the specifications give a figure of 20dBA for attenuation of external noise. Most other manufacturers don’t publish such measurements, so it’s hard to know how well this compares, but subjectively I found the isolation pretty effective, and certainly more than adequate for general studio use.

The treble is velvet smooth, with none of the splashiness or spitty quality that sometimes masquerades as ‘detail’.

I’ve actually heard a fair variety of sound signatures in open‑back headphones, but if Rode mean that the NTH‑100s should sound relatively neutral and smooth rather than hyped or harsh, I’d say they have achieved their goal. I often return to my Shure SRH1840s as a reference that is subjectively flat, and the NTH‑100s have a very similar tonality through the midrange and top end. Where they differ is in the low end, with a noticeable emphasis evident on the Rodes around 100Hz or thereabouts. I would usually think of this as a negative, but in this case, something about the way it is integrated into the overall sound makes it seem quite natural and even enjoyable to listen to. At the other end of the spectrum, the treble is velvet‑smooth, with none of the splashiness or spitty quality that sometimes masquerades as ‘detail’ in other models.

It’s standard advice that if you have to mix on headphones, you should choose an open‑back pair because of their more neutral frequency response. In recent years, though, I’ve heard quite a few pairs of closed‑back ’phones that challenge this assumption. Inasmuch as I’m happy to mix on headphones at all, I’d be happy to do so on AKG’s stunning but pricey K872s, Oppo’s sadly discontinued PM‑3s or the excellent Audix A150s. Having tried Rode’s debut headphones, I have no hesitation in adding the NTH‑100s to that list; and they also make fine all‑round choices for overdubbing, editing and all the other uses to which headphones are put in the studio. In short, Rode have married their ergonomic innovations to a level of sound quality that was previously available only in much more expensive models — and I’m seriously impressed.

If you thought there was no room for innovation in headphone design, think again. The NTH‑100s don’t just sound good, they also materially improve the experience of wearing headphones!