All of Output’s products so far have been an attempt to break new ground in the world of sample processing. Their first, Rev, was a sample engine for manipulating reversed sounds, and that was followed by Signal, which was marketed as the world’s most powerful pulse engine. The company’s latest engine, Exhale, also promises to break new ground and is said by Output to be the first truly modern vocal engine. There may be a flaw in the logic of that statement, but the important point is that Exhale is designed to service the needs of modern music producers who want to use highly processed vocals in their productions. 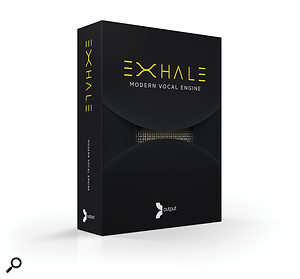 Exhale’s content is divided into Notes, Loops and Slices, but all three categories are accessed through a single Kontakt interface. At the foot of the interface is a list of creatively named factory presets (200 in Notes, 117 in Loops and 100 in Slices), plus any alterations that have been saved by the user. To make it faster to locate appropriate presets, Exhale includes 12 category filter buttons (namely Dirty, Light, One Shot, Percussive, Electro, Creative, Pure, Heavy, Atmos, Looped, Complex and User), which can be used in any combination.

Upon loading a preset, its sound can be altered by four large sliders, which take up most of the interface’s Main page and control up to six sound parameters apiece, as specified by the user via a Macro assignment mode. The sliders are great for real–time dynamic performance work, but deeper programming is done using the tool in the interface’s Engine view.

At its top is a section called Sources, which is where the two samples that combine to make up a patch are chosen from. Each source sound passes through its own channel with tune, pan, EQ, ADSR envelope and options for reversing the sample and changing its pitch.

Underneath Source is the Rhythm panel where rhythmic devices can be used to modulate things like volume, pan, filter and Exhale–specific effects like Talk, Saturate and Phaser. It’s also possible to apply these modulators to the two Source channels by differing amounts, simply by dragging the appropriate fader to the desired level.

As for modulation tools, there’s an impressive selection of waveforms to choose from, ranging from simple to complex, plus the option of using a fully programmable step sequencer for more grid–like detailing.

Finally, at the end of the signal chain (unaffected by the modulators), there’s a bank of insert effects, comprising Pitch, Dirt (distortion), Comp, Tone, Delays, Reverb and a kind of chorus effect called Motion.

Ultimately, Exhale is more synthesizer than sample library. At its simplest, it offers a nice selection of very processed vocal samples together with tools for quickly finding them, but for those who want to delve deeper into sound shaping, or rhythmic synchronisation, it has plenty to offer too.