1W amp based around two dual-triode valves By Bob Thomas

Could this be the perfect low-power guitar amp for studio recording? 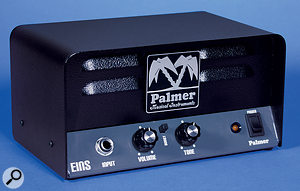 To say that low-power guitar amps have become popular in recent years is an understatement. As I write, there are in the region of a couple of hundred or so sub-10W amps available — and the latest in that number is the Eins, by German company Palmer. This 1W amp is based around two dual-triode valves. Although it breaks no new technological ground, a substantial amount of thought has evidently gone into the implementation of its simple circuitry and facilities.

The all-steel chassis features Palmer's signature black and grey livery, and on the front panel are a quarter-inch jack input socket, a boost switch, volume and tone controls, and an on/off switch and LED. The back carries an IEC mains connector, plus quarter-inch jacks for the speaker-simulated and high-impedance outputs, and the 8Ω and 16Ω speaker outs.

The internal layout is similarly simple. A high-quality PCB carries the few electronic components, together with the two valves. Arranged around the PCB are the single-ended output and mains transformers and the separate speaker-simulation DI module, borrowed from Palmer's well-regarded PDI09. Voltage rectification is solid-state.

The two triodes of the 12AX7 valve act as cascading gain stages. The Boost switch brings in a cathode resistor bypass capacitor on the second stage that increases its output. The 12AX7 then drives a 12AU7 output valve, which has its two halves running in parallel in a single-ended, Class-A configuration.

A built-in resistive load is automatically switched in when no speaker is connected, allowing the Eins to be connected either as a preamp or pedal using the high-impedance output, or as a direct recording source through the speaker-simulation DI. The high-impedance output is taken directly from the output of the power transformer, via an attenuating resistance. The speaker-simulation filter is set in the PDI09 'normal' setting, with no overall frequency cut or boost applied. 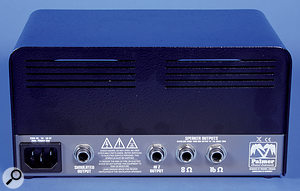 The Eins is capable of delivering the tone (if not the volume) of a much bigger amp. It's never going to worry your neighbours or handle a gig without some help, but for practice or studio use it is pretty much perfect. Since the high-impedance output carries any and all output valve distortion, the Eins can also be extremely useful as a preamp or overdrive, depending on your amp and pedal setup. Although the speaker-simulated DI output sounds pretty authentic sat in a track, the dummy load in the Eins is a simple resistor, and doesn't have quite the same feel as playing into a real speaker or a reactive load. The single tone control works effectively but, for me, is probably better used for small tonal adjustments than for sorting out a basic sound.

With the volume set at about 60 percent and boost switched out, the Eins exhibits little self-noise and delivers a nicely detailed, dynamic clean sound that breaks up beautifully as the guitar's volume increases. With a bit of treble knocked back, it has a warm, jazz-tinged tone, but push the treble up slightly, add a bit more level from the guitar, and there's a nice crunch waiting there.

The boost switch increases gain and output-valve distortion without making too much change in the overall tonal balance, which can leave the Eins sounding a bit thick at the bottom end. Despite this, even with boost in and humbuckers wound up, the Eins manages to maintain the ability to define notes clearly, even within chords, and cleaning up the boosted sound remains simply a matter of rolling back your guitar volume and easing off on your pick.

The great thing about the Eins is that you've got three different ways to use it: first, through a speaker cab; second, direct to a PA or recording console via the speaker simulator; and third, using the high-impedance output, driving another guitar amp or integrated into your pedalboard setup. It's nothing if not versatile.

Try as I might, I can't think of any reason as to why I shouldn't buy a Palmer Eins — so I've ordered one! If you're a guitarist who is into touch-sensitive valve tone, you should definitely check one out too, because it is, quite simply, a no-brainer buy on several levels. Leaving aside the fact that it is a tasty-sounding little amp in its own right, you'll be paying around the same price (or more) for just a decent valve-based preamp that won't deliver the Eins' output valve crunch and distortion. Then there's the PDI09 speaker-simulator DI, plus the tantalising prospect of fitting NOS valves to improve tonal performance!

The Palmer Eins is one of the best low-power guitar amps available, and very suitable for low-level practice and serious recording applications.