Palmer's Pocket Amp aims to eliminate the need for an amp or mic when playing electric guitar. Built into a compact, rugged aluminium chassis, it just about deserves to be called 'pocket‑sized'. Four pots, labelled Drive, Level, Treb and Bass, mimic those you'd find on an amp. Below these are four switches, marked Amp (for selecting the model), Mode (with settings for Clean, Crunch and Heavy), Mic (three emulated mic setups are available) and Gnd, a ground‑lift switch. 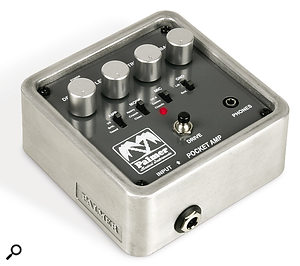 The solitary 'Drive' footswitch switches the amp simulation off or on. On the review unit, this footswitch was rather flimsy, and also highly inconsistent: it worked more often than not, but sometimes did nothing, and others switched twice with one push — so I can't really recommend it for stage use, unless you're happy to leave it permanently on. This is my only major gripe, though, and in the more sedate world of the studio, it's certainly not a show‑stopper.

The expected guitar input is joined by a stereo, 3.5mm jack input, intended for iPods and the like. The three outputs comprise a quarter‑inch jack socket, a 3.5mm headphone out, and an XLR. The first of these allows connection to an amp, the second silent practising, and the third connection to a mic input. Power comes from a 9V battery or a 9V DC PSU.

Sonically, this box is rather good: the selection of amp 'models' covers 'Tweed', 'Brit' and 'US', with each offering a different amount of distortion. Tweed ranges from clean to moderate break‑up, Brit from break‑up to hard‑rock distortion, and US from there to heavy‑metal, high‑gain sounds. There's sufficient overlap in the amount of distortion offered by the models that once you pick your starting point you're able to approximate some sounds offered by the other models, simply by adjusting the Drive and EQ settings.

The Mode switch determines both the amount of distortion that can be applied and the tonal balance. The range available in the Bass and Treble controls is well chosen, with the exception that some noise becomes apparent when Treble is set further than around two o'clock. The Mic switch presents further options: 'Classic' resembles the sound of a cardioid condenser at up to a couple of feet away from the cabinet; 'Centre' sounds much like an SM57 almost touching the grille (complete with proximity effect); and 'Off X' sounds slightly less brash.

Despite the footswitch issue, the Pocket Amp impressed me: its wide variety of amp tones is welcome, and though it didn't respond in quite the same way as a real amp, in a busy mix, and for practise purposes, it does its job very well. Chris Korff