Olympus's LS10, launched in 2008, was their first foray into pocket‑sized stereo recorders of the sort that would be useful to SOS readers. With excellent design and construction married to a well thought‑out user interface and good sound quality, it was­ an immediate and well‑deserved hit. 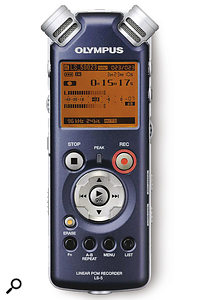 The LS10 has since been superseded by the LS11, which incorporates a number of minor improvements, most notably an increase in the amount of onboard storage from 2GB to 8GB. The latest product to join the range, meanwhile, is the more affordable LS5.

Reviewing the LS5 gives me a strong sense of déja vu, because in almost every respect it is identical to the original LS10 — apart from the addition of a few new features, which make it perhaps the only cut‑down spin‑off product in history to be unequivocally better than the original. The case, controls, and fixed X/Y stereo microphones are exactly the same, albeit in a slightly different colour. However, unlike the LS10, it doesn't come with a padded case as standard. (Most buyers will want to budget for this as a cost option that is so useful as to be almost essential.)

The LS5's storage has been trimmed back again to 2GB, which is still more generous than most of the competition, and can be augmented by SD cards (though I've never felt the need with the LS10). Like its siblings, it can be connected to a computer via USB for file transfer, but unlike the original LS10, it can also serve as a USB interface, allowing you to record directly into an audio application on your Mac or PC. This facility is strictly one‑way, though — it doesn't show up as an output option.

The most important new feature, as far as I'm concerned, is the ability to add index points to PCM files, either during recording or playback, using the assignable 'Fn' button. Pressing this during recording produces an audible but not disastrous click — you wouldn't want to do so during a take, but for demarcating multiple songs in a live recording it could be very useful. Other useful additions include the ability to move, copy and split files.

There's very little to dislike here — and despite being much cheaper than the original LS10, the LS5 actually out‑performs it slightly. Now that's progress. Sam Inglis