Panda Audio’s MidiBeam wireless MIDI interface does pretty much what it says on the tin. There’s a small MIDI transmitter powered by two AAA batteries, with a battery life of over 65 hours. The receiver gets its power from a mini USB socket, and can deliver MIDI either via USB to a computer or through a conventional five-pin DIN. The USB cable isn’t supplied, unfortunately, and for stand-alone use without a computer you’ll also need a USB power adaptor.

Operating on the 4.2GHz Wi-Fi band, the system needs no licence to operate and has a range of up to 250 metres in open space, though the indoor range will invariably be less. Pairing buttons on each unit allow them to recognise each other, and one of 76 possible channels is selected automatically to avoid interference, meaning that multiple systems can coexist. Most importantly, the wireless system only adds around a third of a millisecond to the existing MIDI response time.

This obviously has applications in live sound: those with battery-powered instruments who wish to move around the stage are obvious potential adopters, but there are also studio applications, such as when your MIDI controller is in one room and the MIDI system it controls is in another. For example, an electronic drum kit in the studio could send MIDI to trigger samples in the control room.

The MIDI plug on the transmitter is at the end of a short captive cable, and Velcro tape may be used to fix the transmitter to the instrument. A single power switch is the only control on the transmitter, and the LED flashes to provide a warning when the battery has around 10 percent capacity left. 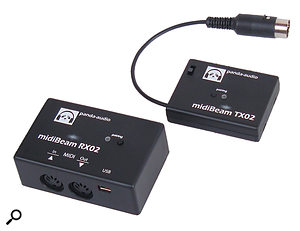 The Panda Audio MidiBeam receiver (left) and transmitter (right).The receiver is recognised by computers as a class-compliant MIDI interface, so it needs no special drivers. As an added bonus, in addition to its MIDI output connector, there’s a MIDI In port that can be used in non-wireless mode, to allow the receiver to double as a basic USB wired-MIDI interface. Although the procedure is not described in the accompanying quick-start manual, the radio power can be set to one of four increments, and the transmitter can also be set to power off automatically if it’s not used for a certain time, with options of 10, 30 or 60 minutes.

The manual directs us to the company’s web site, the support section of which includes both a fully detailed manual and a series of brief MIDI SysEx files that need to be sent from a computer to the devices (which must be switched on and paired) in order to change the settings. The system worked without a hitch once I’d fitted the batteries and paired the transmitter with the receiver.

Indoors, the range is about the same as or greater than you’d expect for your wireless router, and the design includes a safeguard against hanging notes if the transmitter moves out of range. By default the power is at maximum and the transmitter doesn’t shut off until you switch it off, so if you’re happy with that there’s no need to do anything else.

Wireless MIDI has been around for a while, but this system offers especially low delay times, which in normal use will be negligible in comparison with the delays inherent in MIDI systems and keyboard-scanning circuitry. If you need wireless MIDI, then this is a very practical solution. Paul White

€126.87 including tax and worldwide shipping.

€126.87 including tax and worldwide shipping