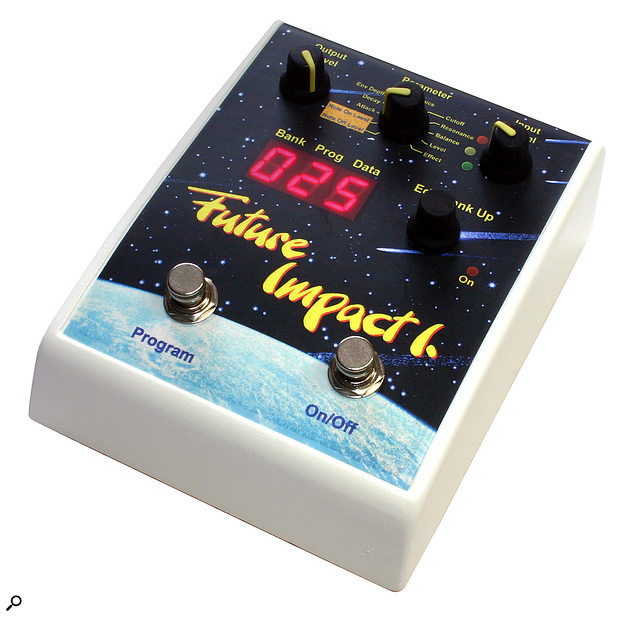 Designed by PandaMIDI in Hungary and inspired by the long-discontinued Akai Deep Impact, this unit adds a useful range of extra features.

Designed by PandaMIDI in Hungary (whose owner Andras Szalay’s work has found its way into devices made by the likes of Akai, Fishman and Terratec/Axon), the Future Impact I bass-guitar synth was inspired by the long-discontinued Akai Deep Impact, which now fetches very high prices.

The Deep Impact created monophonic analogue-style synth sounds when fed from a monophonic bass guitar part. The Future Impact I works similarly, and it’s able to recreate all nine of the Akai’s Deep Impact sounds — but it can do a whole lot more. Unlike the Deep Impact, the synth can be played directly via MIDI. It can store 99 patches, arranged as 10 banks, and sounds can be edited in depth using free software for Windows or Mac. A MIDI interface is required for editing — both the MIDI In and Out should be connected to allow a ‘handshake’ between the synth and editor. (Edited sounds overwrite the existing factory patches on the hardware device.)

Szalay explains that today’s DSP chips are over 100 times faster than those available when the original Akai unit was built, and he’s taken advantage of this to improve the sound quality. There are 24-bit A-D/D-A converters, and there’s 32-bit algorithm calculation and generous oversampling. All this runs from a Boss-style 9V DC power supply that’s not included (there’s no battery option either). You’ll need a PSU that can deliver a minimum of 70mA.

The 155 x 125 x 65 mm pedal is made of cast metal, and there are four knobs, two switches and a three-digit, seven-segment numerical LED display to show bank, program and data values. It’s possible to make a lot of changes using only the front-panel controls, though the free software editor goes much deeper. The centre knob moves between 11 key edit functions, and the Edit/Bank Up rotary encoder doubles as a button. A red LED shows when the pedal is active. When off the pedal operates in true bypass mode. The Program footswitch increments the patch in the current bank, making the number flash to indicate the imminent selection, but the sound doesn’t change until you hit the other (On/Off) footswitch. A quick double-tap decrements the patch number, and pressing the Bank knob steps through the banks. It’s also possible to move through them more quickly by pressing and turning the Bank knob. The remaining two knobs set the input and output levels. ‘Traffic light’ LEDs are used to meter the input level — having the red LED flash only on extreme peaks is optimal.

There are in and out jack sockets for bass guitar, as well as conventional MIDI In and Out DIN connectors. The device switches modes for working with a bass or via MIDI; operation switches to Bass Mode whenever a signal is detected at the audio input.

Internally, there’s a lot going on. Four VCOs (the 512kHz oversampled oscillators can generate saw, triangle and square waves, the last with adjustable pulse width) combine with distorted, pitch-shifted versions of the original bass sound (via three pitch shifters), and facilities include portamento (MIDI mode only), filters (12 or 24 dB/octave), envelope shapers and formant filtering (for vowel sounds) as well as an effects section, in which the bass-derived or synth sounds can be routed separately to a chorus, flanger, slapback delay, reverb, overdrive or a four-band parametric EQ. Usefully, ‘fold-over’ distortion is generated if you overload the following stages — the degree of oversampling avoids aliasing under normal conditions, but this distortion can be used as a deliberate creative tool to add overtones.

The pitch-tracking range extends to cover six-string basses, and I found that it also worked well enough on the lower reaches of a conventional guitar, though the results become less predicable once you get onto the top B and E strings. The VCOs will only track correctly if the bass is played cleanly and one note at a time. When played via MIDI, the note priority can be set to highest, lowest, first played or last played, and while the unit defaults to Omni mode, it can be set to work on any of 16 MIDI channels via the editor software. In addition, the MIDI port may also be used to load future software updates.

Well, the pedal is very easy to use, my only minor frustration being that the function knob isn’t detented, so you have to take care to line it up with the function you wish to edit — though you could always use the editor software if that irritates you.

Sonically, the results are different according to whether you use the Future Impact as a bass processor or a MIDI synth; the bass-processing sounds often include a distorted, pitch-shifted, filtered version of the bass sound as well as the oscillators, whereas in MIDI mode you just hear the oscillators. Note that there are some factory patches that use only the processed bass sound (no oscillators) — nothing will sound if these patches are played via MIDI.

The range of sounds from the bass processing is much wider than you’d normally expect from something that looks like an effects pedal. As long as you play the bass reasonably cleanly there are no tracking or delay problems. Most of the sounds have a fairly fast attack to make them bass-player friendly, and they range from an EHX BassBalls-style percussive sweep to some seriously ’squizzy’ synth leads and basses. As the oscillators can be tuned to intervals, there are also dance chords, parallel fourths and fifths, octaves and so on.

As a MIDI synth, the sounds are somewhat cleaner, and run the gamut of what you might expect from fairly basic analogue synths — but with the added benefit of four oscillators and the formant filter. Making deliberate use of fold-over distortion can add some interesting high-frequency components too. Having in-built effects also helps create a sound that needs no help further down the line.

The desirability of what’s essentially a monophonic processor/synth has to be weighed against more recent developments such as the Roland SY-300, which offers polyphonic operation from a standard guitar or bass. Granted, it doesn’t double as a MIDI synth, but if you’re just looking for an effect, it has a lot to offer and doesn’t cost much more. However, for those who lust after an original Akai Deep Impact, the Future Impact is great: it nails the original sound and gives you bags of scope to create more. Panda Audio claim that the Future Impact I is the most advanced pedal yet created for bass guitarists, and I find it hard to disagree.