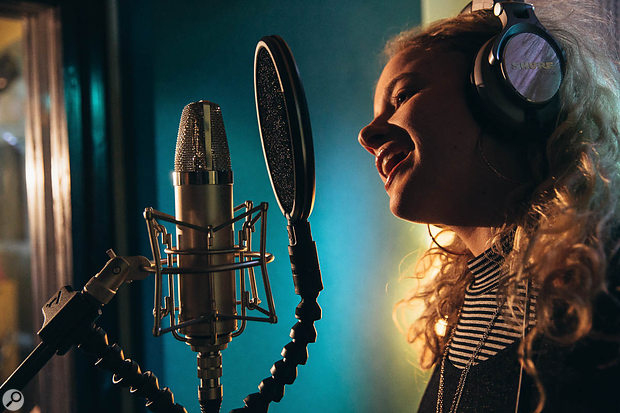 The pop filter is one of those humble yet essential devices that you normally don’t pay too much attention to — which seems strange, really, when you consider that it’s the first thing in your vocal recording chain. Until very recently manufacturers don’t seem to have thought too hard about it either, but now we have a few thoughtful options. First, H kan brought out an open-cell hydrophobic-foam filter (reviewed in SOS February 2014), which is both sonically more transparent than the traditional fabric or metal-mesh designs and, since it repels moisture (whether spit or condensation), it’s more hygienic too. Then Rycote took up the baton, with a filter based on similar principles but mountable on their InVision shockmounts, neatly sidestepping the drooping-gooseneck issue.

The latest company to join this miniature design revolution are a small Cambridgeshire outfit called Pop Audio, whose what-it-says-on-the-tin Pop Filter uses a novel mounting system that, to my mind, is reminiscent of the Gorillapod, with which the photographers and filmmakers amongst you might be familiar. This prevents the filter moving in relation to the source. It also makes it easier to place it precisely. Unlike the Rycote solution, though, this can be attached to any stand — you don’t have to use a Rycote shockmount to make use of it.

To my surprise, inside the box there are actually three different pop filters. Their best-performing one, technically speaking, is made of open-cell hydrophobic foam, like the H kan and Rycote. Yet there’s also a metal one (because it’s more robust and can therefore better stand being thrown in a kit bag) and a more traditional cloth one, with two layers separated by an air gap. The last was included because some engineers preferred that sound, despite the slight HF attenuation — it seems it’s what they were used to hearing!

The filters are interchangeable; they just twist and click into place on the arm, rather like the bayonet fitting on a light bulb. The arm itself comprises a series of ball-and-socket joints. The designers tell me that lots of research went into the design so that it could support the weight of these filters perfectly. At the other end of the arm is a strong but simple clamp, which won’t damage your stand but certainly isn’t going anywhere.

After a month or two’s use I’m happy to confirm that all the designers’ claims seem true. The foam version is certainly cleaner-sounding than my two existing filters (one metal, one cloth), and the mechanisms and build quality inspire confidence. Spares are also available, as is a more affordable cloth version (using the same ball-and-socket arm) called the Classic Edition, which is nice. And that is pretty much it — it’s a wonderfully neat and thoughtful redesign of an essential if unglamorous product. It’s more affordable than the H kan device, and more versatile than the Rycote version. It deserves to do very well indeed.