AMD's dual-core Athlon CPUs are proving popular with those seeking the ultimate in desktop PC performance for their money, and this machine from PC Audio Labs shows why.

California-based PC Audio Labs are a name that won't need introducing to our US readers, as they already have an excellent reputation for their wide range of music PCs. Like many builders they offer desktop, rackmount, laptop and shuttle options, featuring single and dual-core processor options from both AMD and Intel, and they have just established a European division to cater for buyers on this side of the Atlantic. 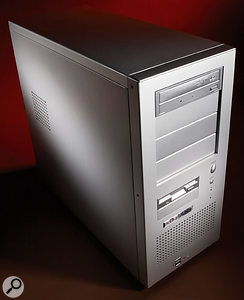 I was certainly impressed by their web site, which not only offers a highly configurable on-line 'customise' engine that lets the customer specify his or her choice of components, but also extensive 'help me' and 'more info' windows, plus a dedicated forum and on-line live support. Unusually, PC Audio Labs also guarantee the lowest price on their DAWs, and will price-match any equivalent system you can find.

A Suitable Case For Treatment

Like all specialist PC builders, PC Audio Labs use a range of carefully selected components, and this model starts with the popular Lian-Li PC60 aluminium case. Three Sound Treatments are available as options. All include a 450W CoolMax Quiet power supply with integral 120mm fan and four-speed control knob on the rear panel, which offers low, medium, high and temperature-controlled 'auto' modes. The standard version sticks with stock CPU and case fans, while the Quiet Operation version swaps these for a Zalman Flower CPU cooler with Fanmate speed control and Zalman case fans with dropper resistors, and the Silent Treatment also fits silicone fan and PSU gaskets to minimise vibration, as well as lining all inside case panels with acoustic foam. The review PC had this latter treatment.

The power-supply fan speed can be controlled from a rear-panel switch, and two extra backplates add Firewire and USB ports.Photo: Mike CameronAt the heart of this system is the Asus A8V Deluxe motherboard that I recommended in SOS March 2006 for those who want to avoid PCI Express altogether, as it's one of the most compatible models with Athlon X2 dual-core processors. This one had been fitted with an AMD Athlon X2 4400-plus processor, four 512MB sticks of Kingston PC3200 RAM, and an ATI Radeon 9500 graphics card, while attached to it were an 80GB system hard drive, a pair of SATA II audio drives setup as 160GB RAID 0 (performance) using the motherboard's Promise controller, and an NEC 16x Dual Layer DVD±RW optical drive.

As already mentioned, this spec is highly customisable from the www.pcaudiolabs.com web site to suit your own needs, but PC Audio Labs always use EIDE drives for Windows XP and software installation, and SATA or SATA II models for audio, sample streaming, video library streaming, or extra storage. Depending on capacity they either use Hitachi or Seagate 7200rpm hard drives, or 10,000rpm Western Digital drives. As well as the normal motherboard ports, two backplates had been added, one housing a second IEEE 1394 port, and the other two extra USB 2.0 ports (bringing the total to six) and a Game port. This still left four unobstructed PCI slots for future expansion. Overall construction was extremely tidy and the internal wiring very neatly tied down.

As always, the moment of truth with any music PC is when you first switch it on, and I must admit to being slightly disappointed by the acoustic noise level of this machine. Although the PSU fans were relatively quiet, and the Zalman Flower cooler kept CPU fan noise to a minimum, the three unsilenced hard drives mounted directly behind the front air intake created enough residual noise to rather defeat the object of this system being given the full 'Silent Treatment' option. The other two dual-core-with-RAID systems we've reviewed recently in SOS have both used a case with a front door that significantly reduces drive noise, and while my own PC uses an identical Lian-Li PC60 case to this review model, its two drives are mounted in Silent Drive sleeves that make a huge difference. Perhaps PC Audio Labs should consider a similar solution, even if it puts the overall cost up slightly. 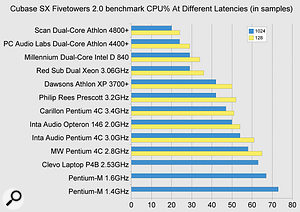 The Athlon X2 4400-plus processor in this PC Audio Labs system turns in an impressive performance in the Fivetowers 2 test, slightly behind the faster 4800-plus model, and once again well ahead of the Pentium D840.Photo: Mike Cameron 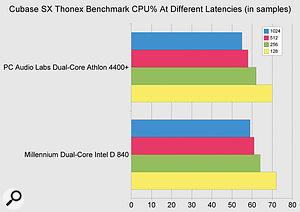 When rather more stressed by the Thonex benchmark, the gap between the Pentium D840 and X2 4400-plus systems closes, with very little difference between the two at lower latencies.Photo: Mike Cameron 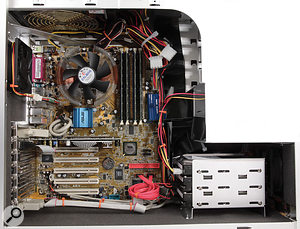 Although the Quiet Operation option fits a Zalman Flower CPU cooler and case fans, and the Silent Treatment option lines the case with acoustic foam, there is nothing to damp noise from the hard drives.Photo: Mike CameronSince the review machine came with no audio interface or music software installed, I removed the Echo Mia card from my own PC and installed that, along with Cubase SX3, so I could perform my usual tests. Unfortunately the PC crashed whenever I tried to access this soundcard, and it was only after a few frustrating minutes that I remembered from my PC Musician feature on dual-core systems that despite being one of the most compatible motherboards around, the Asus A8V is allergic to this particular interface. Instead, I installed the drivers for my CME UF400e Firewire interface (an enhanced version of Terratec's Phase 24), which worked first time and let me complete my audio tests.

I was pleased to find that all the usual Windows tweaks had been implemented (PC Audio Labs claim on their web site to implement 40 or more optimisations to Windows and the BIOS), and immediately pressed on to the most important tests — how well this machine performed with music software. The Fivetowers 2 test song used just 15 percent of its CPU capacity on Stop and 24 percent on Play when running at 23ms latency, and 15 percent and 29 percent respectively at 3ms latency, placing this Athlon X2 4400-plus system fairly neatly into the bar chart just below Scan's 4800-plus system. Once again, this Athlon system performed significantly better at low latency — about 15 percent — than the Pentium D840 from Millennium Music.

For me the beauty of this test is that I've now amassed quite a few results using it, so you can compare new systems with old. However, it's now fairly elderly, so I also ran the Thonex test, which stresses modern processors rather more heavily. You can see this computer's results compared with those of Millennium's Pentium D480 machine in the Thonex chart; once again this Athlon X2 4400-plus system takes the lead, although this time by a much smaller margin, particularly at low latencies where it really counts (just 3 percent at 128 samples). I suspect the 4200-plus model with identical clock speed would also turn in a very similar performance for rather less money, so you might want to consider this option when configuring a PC Audio Labs system.

Overall, this PC is beautifully put together using a classic set of components much favoured by specialist and DIY builders alike, looks extremely smart, and provides excellent audio performance for the price. I was disappointed by the acoustic noise level of the review system, but this could be significantly reduced by silencing the hard drives in various ways, and such a system could be an ideal solution for those who don't want to take a plunge into the waters of PCI Express just yet.

PC Audio Labs test every system before despatch, and are also happy to install the customer's own hardware and software and test it for free. They supply a Factory Restore CD for emergency use, and back each computer with a three-year limited warranty — repairs are free in the first year, while faulty components will be replaced free in the second and third years as well, subject to a limited labour charge. The customer is liable for the cost of carriage to PC Audio Labs, but they pay return carriage charges to you.

They also operate an Advance Replacement service for RAM, hard drives, and fans for those who are prepared to replace their own parts — first the replacement part is sent out to you at no charge, and then you return the faulty one within 20 days to avoid being billed for it. Technical support for the core components and Windows OS is provided for the lifetime of the PC, by telephone and on-line live during working hours, and you can also have remote support using an optional virtual network client via the Internet.

This PC from PC Audio Labs is well-built using a classic selection of hardware components, and provides excellent audio performance. Only its acoustic noise level lets it down slightly.