This library from UK sample producers Soniccouture, is a collection of 1200 mashed-up drum hits, synthetic percussion, glitches, ticks, and clanks, sorted into 24 drum kits in various formats (Reason Refill, Kontakt, Battery, EXS24 and Halion). The samples (refreshingly contained on just a single CD) are split into two types: drum kits and percussion effects kits. The drum kits contain samples designed to construct whole rhythm tracks, and are sorted wherever possible (quite a difficult job in places) into the usual types — kicks, snares, hats, and so on. This categorisation is quite loose, and the more unusual samples are given names that range from the obvious to the more cryptic or obscure. The percussion effects kits on the other hand are more suited to being used as spot effects, stabs, or general percussive flavouring to spice up a groove, rather than being designed for constructing a whole drum track. 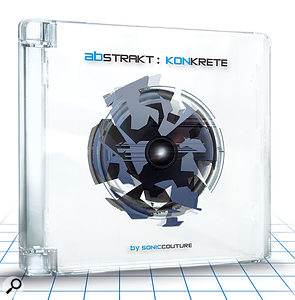 As you've probably guessed, there are no conventional drum samples featured here, so the kits don't stick to any traditional or formal mapping. The samples start on C1 with the kicks first, followed by snares, hats, and percussion, and that's about it. In addition, as the percussive hits are entirely based around one-shot samples, there are no velocity layers used within any of the kits. Given the experimental nature of the content, these omissions seem pretty irrelevant and certainly don't compromise the usability.

The kits themselves are all very well done and are loosely based around a theme, a recording process, or a sonic idea. These themes range from the heavily distorted and bit-reduced Crunch Kit and the two hard-hitting and industrial Earache Kits, to the glitchy Mesh Kit or the Human Kit with its various voice sounds miked through a digeridoo. Personal favourites include the Klang Kit metallic sounds, which have the ambience of a miked-up washing-machine drum blended in, and the resonant clatters of the Static Kit.

The overall sound quality is high, with each kit's samples sitting together nicely within its theme, however unusual that may be. The majority of the sounds are highly original, and nothing, however weirdly created, seems completely unusable. I admit to liking sample collections that inspire ideas from the user rather than delivering the finished goods polished, produced, and served up on a plate. Konkrete is certainly an ideas collection, and it's also very entertaining to spend a few minutes throwing random kits at a simple pre-programmed pattern to see what sticks; a good thing in my book.

I think it's pretty much a given that this collection will appeal to anyone making experimental, glitch, or IDM tracks, but I think its appeal is much wider. Producers of techno, drum and bass, and even more left-field hip-hop, as well as anyone with a passing interest in rhythm programming, will find plenty here to create more original beats or just to add those finishing sonic flourishes to their drum tracks. Oli Bell

This library comprises over 4GB of mapped drum kits, kit components, and performed rhythm loops driven by MIDI files. The drums are played by Oslo session drummer Eirik A Rydningen, the concept being to provide convincing-sounding acoustic drums for rock and pop work. Kits recorded include an old Gretsch kit, a Yamaha Custom birch kit, and a 24-inch Premier kick drum. There's also a Ludwig kit with a huge 26-inch kick drum, and a spectacular assortment of cymbals.

The mapped kits are multisampled with around half a dozen velocity levels per drum, which is enough to sound authentic without being excessive. Retro Ambient, Big Ambient, Power Drums, Hali B, and Beefy Ballad kits are included, but there are also menus of snare drums and cymbals which can be used via the EXS24 copy and paste system to create customised user kits or simply to play as individual sounds. The mapped kits go far beyond GM, with seven or so different snare articulations per kit mapped to different keys, and far more cymbal samples than you'd normally expect. Again you could use the EXS24 's capabilities to rationalise these to simpler GM kits in very little time, but the sheer breadth of what is on offer here is impressive and contributes towards a natural-sounding performance. All the recordings were made in a top Oslo studio and have varying degrees of natural room ambience. 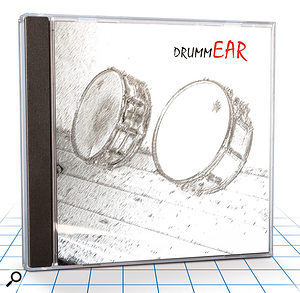 In the grooves section are samples which have been chopped into slices (in a similar way that Recycle does), and these have corresponding MIDI files that are used to trigger them. This provides a useful degree of flexibility over tempo. Furthermore, two of the kits have a spill component that can be added to emulate mic bleed. You also get separate sample groups for direct or close-miked versions, the room mics plus overheads, and a mix of both room and direct sound. The Big Ambient and Retro Ambient kits comprise multi-mic samples, where there are as many samples as there were mics on the kit. This is similar to the approach taken in the Toontrack DFH and FXpansion BFD drum instrument plug-ins, though there's no front end to do the mixing, so any balance changes have to made in the EXS24 Edit page.

Subjectively, the drums come across as very natural, with a good variety of flavours that should suit most music where conventional acoustic drums are appropriate. Most of the sounds are great just as they are, which is just as well given that editing in EXS24 is rather long winded. The MIDI groove library is also particularly welcome. Even if you tend to use mainly grooves, having the separate kit samples enables you to program rhythms and fills that aren't in the groove library while maintaining a cohesive sound, and having MIDI files to control the grooves gives you some flexibility for adjusting the tempo before the end result stops sounding natural. Thoroughly worth four stars, though inevitably not as straightforward to drive as a sample-based instrument. Paul White

Regular readers may recall that the Kick-ass Brass sample library got a five-star review from Paul White back in SOS November 2003. The library was originally released in native formats suitable for all the major samplers, but the soundset has now been expanded into a dedicated virtual instrument. While this format makes it much easier for library producers to copy-protect their samples, it also makes the samples very easy to use within a MIDI + Audio sequencer.

The core samples in this new version are the same as in the original release, so Paul's comments still stand — the samples are well recorded and, for modern (well, '60s soul onwards) brass sections it is possible to create some excellent results if you use the many performance articulations carefully. To the original tenor and alto saxophones, trombone, and trumpet, AMG have added baritone sax and a muted trumpet. These new instruments sound just as good as the original material, with the muted trumpet being particularly atmospheric. The same sorts of performance variations are included for these new instruments, and program types such as Ends, Expression, Stabs, Rips & Falls, Shakes, Swells, and Slides give an indication of the variety provided. 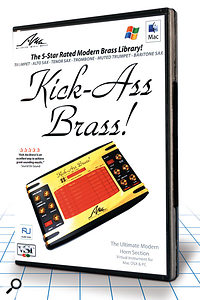 Thankfully, AMG have done an equally good job with the graphical front-end, and have combined good looks with ease of use. The plug-in is eight-part multitimbral, features four virtual stereo outputs (allowing you to mix different instruments via your host sequencer's mixer if required) and includes two dedicated effect units. AMG have included over 100 individual instrument patches and a selection of 15 Multis, the latter including a few preset four-piece sections — just load and play for instant brass gratification. The plug-in also includes a MIDI-learn facility, so all the controls can be mapped to a hardware controller.

In use within Cubase SX on my dual Athlon-based review PC, the plug-in worked flawlessly, and a single instance of Kick-ass Brass had the sequencer's Performance Meter sitting between 15 and 20 percent depending upon the complexity of the parts being played. Usefully, a number of Economy programmes are included, which sacrifice some complexity but place fewer demands upon the host computer. The built-in effects sound good, with reverb, delay, and modulation programs provided, although these are fixed presets with no user editing available other than the send levels from each part.

It does take a little work to blend the appropriate articulations, and it also helps to know a little about arranging for brass if you're after realistic results, but Kick-ass Brass is still one of the most convenient and convincing ways to create modern brass sections using samples. Perhaps the only downside is the £200 asking price which, compared to the £60 of the original native version, might put it out of the reach of some. However, there are trade-up deals for owners of the original library and, even at £200, Kick-ass Brass is likely to be cheaper than a single booking with a live brass section. Overall, this library is aptly named — the samples themselves sound great and the front end is very slick. John Walden

These two libraries preach the universal message of rock via one mightily distorted guitar. A PRS Custom 22 guitar was played through a Mesa Boogie amp, a brand famed for its extreme loudness. There's no sonic difference between the volumes, the second 3.75GB set carrying on where the original 3.6GB volume leaves off.

Volume 1 offers single notes and power chords played in down-picked, palm-muted, and 'hammered-on' styles. The basic sound is strong, fairly bright, and heavily distorted without being 'fizzy'; no vibrato is used, and notes die away naturally with no looping. The guitar's range is extended down to low 'A' by detuning the 'E' string — this works OK as far as 'C', but below that the tuning suffers. It's nonetheless quite an exciting noise! There are no whammy-bar effects, but some wild string scrapes register high on the rock-ometer. 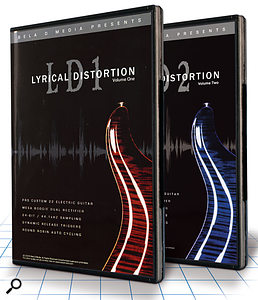 The chugging staccato palm-muted samples sound great in the bottom octave, but move more and more sharp further up the range — post-production could have rectified this. Played in classic root-fifth-octave style, LD1 's power chords sound great, and avoid the sub-bass tuning issue described above. LD2 offers some good power-chord alternatives — there's a contemporary-sounding open 'sus 2' voicing, a set of plain fourth chords, and staccato and palm-muted staccato deliveries. These all sound extremely powerful, energetic, and aggressive, and will add instant rock attitude to your track.

LD2 extends its companion's sample menu with straight and palm-muted up-picked notes, 'pull-offs', excellent single-note staccatos, and some mad muted-string noises which can add a bit of grungy realism to your riffs. A huge selling point for both libraries is that all instruments have two versions — load both, set them to the same MIDI channel and you have instant stereo double-tracked guitar. Rocktastic!

Although the hammered-on and pulled-off samples lack the fierce attack of the straight picked notes, they don't produce a convincing legato effect — my attempts at a Holdsworth-esque fluid delivery sounded more like a harpsichord! According to the maker, the legato effect has been somewhat improved in new programs which combine samples from both libraries; I downloaded these, but was unable to audition them due to the new instruments being unable to locate their samples. (Even Kontakt 2 's Search File System facility couldn't solve this problem.)

There were also a couple more technical bloopers with missing samples, and if buyers encounter problems they should ask Bela D Media to replace the DVD. These are basically very good libraries, but LD2 is let down by poor quality control. Dave Stewart