Serato's Pitch 'n Time has carved out a reputation as one of the best time-stretching and pitch-shifting plug-ins out there, with special features including 'morphing' time-stretch and the ability to recreate varispeed effects.

Serato's Pitch 'n Time Pro is a plug-in that enables you to vary the pitch and/or the tempo of your source material. It isn't available in any real-time format, as these require a plug-in to have a 1:1 input-to-output ratio in respective of the number of samples — time-stretching, which involves changing the number of samples, can only be done with a file-based plug-in. However, although it is an off-line plug-in, Serato have cleverly enabled automation options that you would otherwise only find in a real-time plug-in, thus making post-production ritardandos ('rits') possible. It's also possible to treat multiple tracks (up to 48 of them!) simultaneously and retain their phase coherence. Pitch 'n Time Pro works as an Audiosuite plug-in in Pro Tools, and is compatible with both Mac OS X and Windows XP. 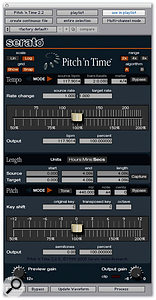 The Pitch 'n Time window has three main sections. Starting from the top there is the Tempo section, which offers three modes — Fixed, Variable and Morphing. Next there is the Length section, which shows the start, end and length of your selection; you can edit the source or target data from here and the information in the corresponding section will be updated. Finally, at the bottom is the Pitch section, which also has three modes — Fixed, Variable and Varispeed. In addition, right at the top of the window are some general controls which include a range selection from 2x to 8x as well as two different algorithm modes, one which suits more tonal sounds and the other which is better on more transient sounds. 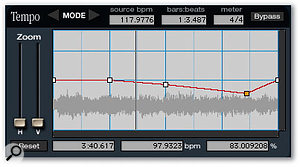 Pitch 'n Time's Variable Time-stretch panel allows you to create ritardando effects.The tempo adjustment is nothing short of stunning. I mainly used the same samples that I used in the my recent shootout of Pro Tools limiter plug-ins, as they cover a wide range of material to test out Pitch 'n Time 's abilities. I tried the drum & bass track first, which seemed fine, but where Pitch 'n Time really started to show what it is made of is with the rock opera and solo ballad clips. It was easily handling speed increases of up to 50 percent, and it was a revelation to find that the first problem to become noticeable was vibrato on the vocal and strings becoming too fast. The slowing down wasn't as spectacular, but again, that was down to the limitations of the sound and what happens when you slow down a performance by extreme amounts. In short, Pitch 'n Time will reach the limits of the sound of the source material before artifacts from the tempo-change processing become a problem. For music I didn't go beyond the 2x setting, but the more extreme settings available are great for creating and treating special effects.

To access the other Pitch 'n Time panels you click on the triangular Mode icons. The first of these is Variable Time-stretch, the obvious application of which is to create a ritardando in a source file that didn't have one. You can draw the 'rit' just as if it were automation on a track.

I tried creating a rit in the rock opera clip. I selected the end of a chorus and took the selection beyond into the bridge so as to be able to control the return to the normal tempo as well. To get the waveform in the plug-in window you click on the 'Update Waveform' button at the bottom of the plug-in window; you can then draw the rit by creating 'anchors' through Command-clicking, just as you would with track automation with the Smart Tool enabled. Use the Preview button to check it works. The whole plug-in works just as if it was a real time plug-in, to the extent that I kept inadvertently pressing the space bar to audition things instead of using the Preview button! Once I was happy I clicked on Process in the normal way for an Audiosuite plug-in and there it was back in the track, done.

Serato have recently released an LE version of Pitch n' Time which shares the same algorithm as the full version, so there's no reduction in quality. What you don't get with the LE version is the multi-channel facility where it is possible to treat up to 48 tracks together and maintain their phase coherency. You also don't get the variable time-stretch and pitch-shift features, the waveform views or the varispeed options. However, Pitch 'n Time LE makes the plug-in available for the first time to Logic users.

Things just get even cleverer with the Morphing Time-stretch tool. Imagine a scenario where a performance is excellent except that one note has been left a bit short. In the screenshot above, I have a bass guitar track where the first note is shorter than I wanted. With this section I can take the end of this note and stretch it to fill the gap without affecting any other notes.

First, place a Marker on the start of the second note to make sure nothing else after it moves. Then place another Marker near the end of the short note — you will notice that markers are placed simultaneously on the Source and Guide waveforms. Now comes the clever bit. Move the short note's Marker to the right and the note will stretch to fill the hole. When you're happy with the sound, Process the section and it's back in the track. 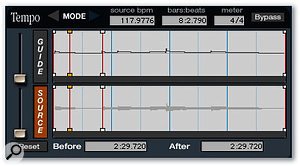 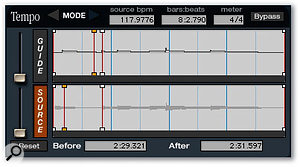 With Morphing Time-stretch, you can change the length of one note (the leftmost, in this example) without affecting anything else.The basic Fixed pitch-shifting panel works in a very similar way to the fixed time-stretch panel above, except you are adjusting pitch instead of tempo. There is a very helpful key signature section to help you, as well as a tuning reference if required. Yet again, it just works. It was very interesting trying it on the solo ballad clip as the vocalist is my wife Sally, and when I took the piece up a full tone I took 20 years off her voice! Similarly, taking it down a semitone gave her an even richer-sounding voice. The jazz clip was even more spectacular: I had no problems going five semitones down or three semitones up, and again, it was issues with the performance rather than pitch-shifting artifacts that determined these limits.

There is also a Variable Pitch-shift panel, which works in the same way as the Variable Time-stretch panel described above and can produce some very interesting effects. Finally, the Varispeed Pitch-shift panel links the time-stretch and pitch-shift together to give you a genuine varispeed plug-in. You no longer need to dust off your quarter-inch tape machine to get that varispeed effect. You can programme 'wobbles' or do a run down to stop as you can with Digidesign's Vari-fi, except that with Pitch 'n Time you can adjust the way the speed changes.

The Pitch Of Perfection

In the years since it was first launched, Pitch 'n Time has, among other things, carved out a niche handling the pitch correction for film to video transfers in the UK. Films are usually shot at 24 frames per second but our television is 25fps, so when a film is broadcast without treatment it plays 4 percent fast! Pitch 'n Time is now regularly used to process the audio to correct for the pitch change from playing the film somewhat faster. However, it also has loads of other applications, and I was surprised by how many features are included. Pitch 'n Time is an extremely powerful and sonically impressive plug-in, and goes way beyond just being a tool for correcting film-to-video transfers! I have now made Pitch 'n Time the default time-stretching plug-in in my Pro Tools toolbar.

At last, a pitch and time-correction plug-in where issues of the performance will show up before the artifacts of the processing.